The Problem With Trillian: Hitchhiker’s Guide and Me

Late last month, British actress Susan Sheridan died of cancer at the age of 68. Sheridan was an accomplished voice artist, but for me (and, it seems, for a lot of news writers), her defining work was in the original Hitchhiker’s Guide to the Galaxy radio show. Sheridan played Tricia McMillan, known as Trillian (because, according to writer Douglas Adams, “it was a nickname that also sounded like an alien name”) – one of two surviving humans on the show, who is also an astrophysicist and the girlfriend of Galactic President Zaphod Beeblebrox. After Sheridan’s obituary was published, my friend Louise tweeted at me to ask if I’d written anything about Trillian. I hadn’t, I answered, but oh gosh did I have thoughts.

This turned out to be true, but incomplete. I did have thoughts about Trillian, a character who the Guardian notes was “not especially well written” but to whom Sheridan’s interpretation gave “an intelligence and likeability that removed any suggestion of her being a token space bimbo.” But I didn’t have a lot of feelings about her. I was sorry to hear about Sheridan’s passing because she was comparatively young and enormously talented, and because I am a human who’s capable of empathy, but not specifically because she was the voice of a character I loved. My feelings about Trillian were as they always have been: fairly indifferent. The one woman in my favorite sci-fi series of all time, and I just didn’t really care. What, I wondered, the hell?

Here is my feminist origin story: I sprang fully-formed as a twentysomething feminist from inside the head of a teenage boy. All through high school and college, my favorite books – my formative books – were the kind of works that might show up in Favorite Books of the Secretly Jerky. I loved (and still love) Catcher in the Rye. I loved (and still love) A Clockwork Orange. I profoundly loved (and still love) all Vonnegut. And most everlastingly of all, I loved The Hitchhiker’s Guide to the Galaxy, which is perfect and hilarious and life-changing and extremely, extremely jam-packed with dudes.

I’m sympathetic to men’s defensiveness when they’re told their faves are problematic (I know, you wouldn’t think I’d be sympathetic to men, but I am!), because a lot of those are my faves too. Figuring out a way to love a piece of culture without letting it off the hook was a difficult task, and one that was ultimately crucial to my development as a feminist and as a thoughtful human. I had to recognize that, even as I’d made so much room for these books inside myself, in a very real sense they had no room for me. And so let it be said: The Hitchhiker’s Guide series is one of the best sci-fi properties on the planet, and also there is only one core* female character, and she is not good.

It’s not that Douglas Adams didn’t try with Trillian. He gave her two higher degrees, in math and astrophysics. He made her the nominal romantic partner of one of the characters, yes, but not the sympathetic Everyman hero; Arthur has designs on Tricia when they first meet, but he never “gets” or even pursues her, at least not while Adams was alive. Life, the Universe, and Everything contains a couple of extremely cutting scenes showing her as an underappreciated girlfriend, and in Mostly Harmless, there are two alternate-universe versions of Tricia McMillan; one is a neglectful mother and the other is career-driven, single, and full of regrets. Strong Female Character markers everywhere! And hey, at least Adams put a woman in at all, which almost didn’t happen. In the footnotes to the radio scripts, producer Geoffrey Perkins notes: “In earlier drafts the character was called Goophic, before that Smoodle, and before that she was a man!”

But this is still poor, benighted Earth, where people think digital watches and sexism are pretty neat ideas. Trillian doesn’t get a lot of laugh lines, or a lot of interior landscape; most of the time, she’s seen from the outside, filtered through a male observer. Until her alt-Earth version appears in book five, there’s really only one point where the omniscient narrator dips into her psyche and gives us a sense of Trillian as a subject – and it’s when she’s deciding to leave Zaphod. And it’s that lack of subjectivity – the fact that even attempts to make Trillian a more dimensional female character still stop short of making her a fully-realized person – that leaves her, and the series, vulnerable.

Trillian has never been able to escape being buffeted by conventions and expectations. When she’s good, she’s either a spoof on the “token girl” or a by-the-numbers Strong Female Character. When she’s bad, she’s a security hole – a way for lazy, shitty tropes about women to hitch a ride, Ford Prefect-style, on a series that otherwise bucks cliché.

While Sheridan’s delivery gave the radio character some gravitas, she was eventually written out of the show with the explanation that she was “forcibly married to the President of the Algolian Chapter of the Galactic Rotary Club.” The Trillian of the 1981 TV show still has the degrees, but she also has a backless, plunge-necked red leotard, platinum Bangles hair, and actress Sandra Dickinson’s distinctive Audrey-from-Little-Shop baby voice. The best that can be said is that she eventually gets to put on a skirt. (Of course, astrophysicists – and others – can show thigh and cleavage if they want to! But when they do it on a television show, it’s usually for a reason other than personal autonomy.) And the less said about what’s done to Trillian in the 2005 movie, the better – she’s a quirky, free-spirited girl whose purpose is to teach empathy to Zaphod and spontaneousness to Arthur. A Manic Pixie Dream Astrophysicist.

As for the books – well, the first time I read the books, it was in fact because of Trillian, but if you’re expecting this to be a heartwarming “young girl is drawn into sci-fi because she feels represented” story, you’ll want to move along. What happened was, we were staying in the home of a family whose son had the Hitchhiker’s books, and the back cover copy referred to “sexy space cadet Trillian,” so I thought it might be racy. Book Trillian is far from being a sexy space cadet, to her and Adams’ credit. But the fact that she was described this way in the marketing copy says a lot about expectations of female sci-fi characters at the time, and who their audience was assumed to be.

Many elements of Hitchhiker’s Guide – the auto-translating Babel fish, for instance, which gets around the “why do all the aliens speak English” issue of most space dramas – are deliberate jabs at science fiction problems or themes. But the characters (with the possible exception of Marvin the robot) are all sui generis. Arthur isn’t a variation on the usual hapless nitwit in a bathrobe thrown into a galaxy too big to comprehend, because that’s not really a thing. Ford isn’t a spoof of the standard boring alcoholic goose-hating roving alien researcher. And so on.

But Trillian? I’m not so sure about Trillian. Even when nobody’s making a hash of her, even when a master like Susan Sheridan is giving her the best possible read, her role is kind of “the girl who’s there, but smart.” And that makes her vulnerable to predation by hackish tropes. Why not have her walking around the bridge of the Heart of Gold in a backless plunging leotard? Why not develop an offensively goofy romantic subplot where she helps Arthur learn to carpe the diem? Trillian wouldn’t do that, you say? How would you know?

When female characters are whole, real, singular people, they are to a certain degree inoculated against these banalities. When they’re skeletons, though, someone will be more than happy to flesh them out with whatever stereotype is currently preferred. Women characters are always under attack by hackneyed ideas; without an interior, they just collapse under the weight.

I don’t hold Trillian’s nonentity status against her, or against Adams. She’s a product of her times, whatever her times may be: eye candy when that’s the biggest pitfall for women in a pop-culture boy’s world, whimsical saver of men’s psyches in the Manic Pixie era. And I find her a lot more interesting now than I did as a Ford-obsessed preadolescent – because I’m interested in women characters generally now, including the ways they break down. Maybe figuring out Trillian’s failures can point the way to a new age of sci-fi women as distinctive and indelible as Ford Prefect or Zaphod Beeblebrox, women whose strength will lie not only in their smarts but in the way they stand guard against laziness and cliché.

In a lot of ways, that age is already here. I’m just sorry Susan Sheridan won’t get to give voice to it.

* I’m defining “core” here as “existing in all adaptations of the work” – radio show, book, television show, and movie. 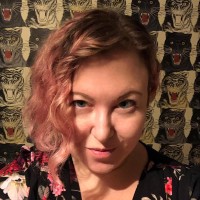