Waking from a dream you don’t remember but that nevertheless was powerful enough to leave you with a sense of of having been with people who are somehow both friends and strangers, as well as—you suspect—your ex
+ complete empty space in the part of your brain where today’s day of the week should be
+ encroaching dread that it might, after all, still be a weekday
+ rueful thoughts re: said ex/said weekday
+ determination to overcome rueful thoughts

Loyalty to the outfit you meant to wear today
+ surprise and disappointment that it has turned out not to be seasonally appropriate
+ stubborn rebellion against the weather—fuck you weather, you don’t own me—

Deep-seated lizard-brain love when the word MOM pops up on your phone
+ reluctance to answer because God MOM
+ irritation because MOM God
+ serious urgency re: getting out of the door on time
+ distraction re: MOM
+ confusion re: what is she chattering on about?
+ that creeping back-of-the-brain feeling that you’re leaving something behind

Sense of accomplishment re: leaving on time
+ sense of inadequacy re: realizing you left that thing behind

Grown-up sense of dutiful necessity re: commuting
+ childish sense of indignation re: being hot, not having enough space, the train going too slowly, being face to face with a person eating a fart-smelling egg sandwich, being yelled at by the Jesus lady about your sins

Relief re: walking into your over-air-conditioned office
+ shyness re: saying hi to your coworkers
+ shame re: your own shyness
+ determination to overcome both shyness and shame
+ stress re: all that shit you put off until today

Ex post facto irritation with MOM for doing that thing she does all the time
+ real dread re: her eventual mortality
+ feelings of anxiety and low self-esteem regarding your own ability to be a self-sufficient adult
+ guilt for making it all about you

Delight about leaving the office
+ anxiety re: tonight’s plans, namely a potentially disastrous first date with someone you once thought—passingly, drunkenly—was sort of cute
+ regret for ever having admitted out loud that you thought said person was sort of cute
+ embarrassment re: ever having entertained the notion that he might be cute
+ vitriolic hatred for friend who was horrible enough to take you seriously and impudent enough to give him your number
+ decisive conclusion that he is not cute
+ indulgence in wildly imaginative ways of getting out of potentially disastrous first date, like telling him you came down with Legionnaires’ disease or that your cat died or that you fell into a sinkhole on Fifth Avenue
+ anxious desperate hope that your cat didn’t die, at least not today, please God let her live forever
+ half-assed ambivalent rumination re: existence of God

Relief at getting home
+ relief that cat is still alive
+ complete and total, overwhelming love for cat
+ real pain that the cat probably isn’t capable of love and, from the way it acts, certainly doesn’t seem to love you
+ anxiety re: potentially being a sub-par cat owner
+ eagerness to please said cat by playing with cat, cuddling cat
+ feelings of rejection triggered by cat

Wish to do literally anything but go on a potentially disastrous first date
+ deep need for comfort and security
+ nostalgic urge to change into pajamas instead of into a more seasonally appropriate / slightly cuter outfit and watch My So-Called Life alone with the lights off and maybe a cat, if the cat chooses to join you
+ vague, leftover, teenaged urge to be Angela Chase
+ relatively newer, more feminist, more adult knowledge that Angela Chase was a sad, boy-crazy teenager
+ something like outrage at the mainstream culture you grew up in for not having presented you with enough intelligent, industrious female role models

Extreme discomfort at having to wait alone in a crowded bar
+ desperate hope that your attempts at seeming relaxed and absorbed in something extremely interesting on your phone are successful
+ desperate hope that you successfully brushed and gargled away your pizza breath
+ valiant effort to quell self-consciousness re: own level of cuteness, which has always been / will always be a mystery

Pleasant surprise at warmth of potentially disastrous first date companion’s greeting / nice eyes / good sense of humor, despite
+ realistic assessment of the uncomfortable-looking way his shirt fits—or, more accurately, doesn’t fit—and of the blackheads he probably doesn’t know how to remove from his nose, and of the funny way he pronounces your name
+ self-congratulation at successfully getting his sense of humor
+ insecurity re: whether or not you do in fact get his sense of humor
+ the slightly paranoid feeling of second-guessing this initially entertaining sense of humor, like, perhaps he isn’t as funny as you thought he was, isn’t as funny as he thinks he is, isn’t actually that funny, I mean why would a guy this cute be single in the first place anyway—but then why is anyone single, why are you single—
+ self-loathing
+ self-consciousness re: the way you laugh
+ self-consciousness re: the way you smile
+ self-consciousness re: whether you’re drinking too much
+ enjoyment of drinking-related buzz and laughter
+ enjoyment of his hand on your hand—momentarily, fleetingly
+ possibly impaired assessment that he is not so bad
+ possibly impaired hunch that own powers of assessment are actually enhanced, not impaired, by alcohol
+ alcohol-enhanced feeling of sexiness
+ urge to kiss
+ enjoyment of kiss
+ mmm, kissing

Supreme feeling of sweetness re: victorious first date & wind in the cab windows over the bridge & being liked & being pretty
+ vague drinking-related nausea

Feeling of walking into a dark apartment alone
+ slow replacement of post-great-first-date glow by a deeper, more complicated sense of nostalgic longing for your ex
+ feeling of being totally alone in the world
+ desperate need for love from cat 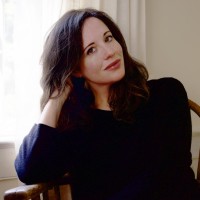 Rachel Lyon's work has been published in a number of literary journals, which you can find links to at about.me/rachellyon. Rachel writes meditations about strangers for Luna Luna, and is at work on a novel.