The first time I ever spoke publicly about the games I make was at a social event in October 2013, hosted by a Toronto-based feminist non-profit called Dames Making Games (DMG). I had created a small, personal game about my experiences with disordered eating, and while I was proud of the game, I was also terrified of speaking about my experiences.

It felt safe making a game about my disordered eating, because then I didn’t have to see people’s reactions to it. In a sense, I could hide, even while trying to create a space for understanding and compassion. But standing before a roomful of friends, some acquaintances, and many more strangers, there was no hiding anything.

I tried hard not to crumple the notes I had written, focusing on talking slowly rather than at my usual lightning-fast pace. I was terrified of how people would react, what they would say, how they would treat me. What if they thought my game was silly or self-indulgent? What if they judged me for what I had gone through?

But none of those fears came true. Every word I spoke that day was met with nods, and some smiles, and — if not universal understanding — then at least the universal attempt at it. People listened to me with real compassion, and for the first time, I felt like what I was saying about my struggle was not just being heard, but accepted. That kind of acceptance and empowerment, I’ve found, can be very rare. But when you do find it, it can make you feel indomitable. It can provide space for healing.

Building supportive relationships with other women has become paramount to my health, growth, and overall happiness. The warm atmosphere and genuine compassion and interest I found at Dames Making Games inspired me to attend more DMG events. Now I regularly attend events, participate in game jams (weekend-long events with the goal of making a complete game by the end of it), and chat with other members about our work and lives.

DMG is dedicated to creating a safe and supportive space for women, people of colour, and LGBT individuals to make and play video games. The co-directors and members of DMG work hard to create this open and generous space in an industry that is at best volatile and at worst aggressively hostile for many women. Being new to Toronto, not knowing many people, an organization like DMG was especially appealing to me. Attending DMG events seemed like a safe way to pursue a passion of mine and not feel quite so lonely at the same time.

And yet I avoided DMG events for a long time. I was intimidated, and had also been wrongly conditioned — due in part to false and harmful stereotypes about women — to believe it might be a catty, drama-filled group. Growing up with older brothers meant that, for most of my life, I was light-years more comfortable befriending and hanging out with boys than girls. For a long time, I thought I just didn’t “get” girls and women.

But at DMG I met so many funny, supportive, and talented women — nerdy women working together, supporting one another’s growth, and defending each other in a community unlike any other I had ever seen. That first night I spoke at DMG, and at many subsequent events, I remember being told, “We’re so glad you’re here.” Simple, but that kind of affirmation and acceptance can go a long way.

On a personal level, DMG has taught me one crucial lesson: I can do this. And in an industry like gaming, in which a lot of the dialogue surrounding women is far from encouraging, this simple lesson packs a big punch. From DMG, I’ve learned confidence in myself — and how to share accomplishments and successes with likeminded people in a non-competitive, fully supportive way.

So many of the coding tricks I’ve learned have come from this community of women, who were willing to discuss and share work they’ve done with me. Of all the communities I’ve been involved in, I never thought video games would be the one to afford me such a feeling of safety and empowerment. DMG lets me — and many other women — feel safe enough to make, play, and talk about games to our hearts’ content. (Because a lot of the time, that’s really all we want to do.)

Some of the women I met in DMG are now my close friends, colleagues, and confidantes. I can’t imagine my life without them — I definitely wouldn’t have made any more games without them. While all the games I’ve made have been small, personal games, they have helped me cope with personal situations and issues I had never faced or dealt with before. They’ve given me a way to express myself however I need. I almost missed out on that opportunity because, for a long time, I just didn’t believe I could get along with or find support in large groups of women.

There’s another group of women that has changed my life for the better. Oddly enough, many of these women are still relative strangers to me. I’ve struggled with disordered eating for a long time. Therapy kind of worked, mostly failed — I just kept moving forward without ever really addressing the core problem. Thanks to an emotionally abusive relationship and work-related issues, a problem I thought I had since taken control of began to spin out of my hands again in late 2014.

One day in April 2015, while Googling options for treatment, I found a free centre devoted entirely to group therapy. I registered for a couple of group sessions, not expecting much — I was just running out of choices at that point. I went to a few open adult group sessions, and while I wasn’t convinced it would work, I didn’t immediately give up on the idea, either.

I eventually got laid off from my job, and that’s when this group — and recovery — became my focus. I began attending a weekly trauma group. While its purpose was to teach participants skills for coping, I was surprised at how good it felt just to be with a group of other women. Around week eight or so, I finally realized why: it was a group of women who, without really knowing each other, were there solely to support and help one another heal.

Group therapy — and building the relationships within it — wasn’t easy. Sometimes we disagreed. Sometimes we triggered one another. Sometimes I left group feeling angry and hurt, but just as often I left feeling okay. There were times when going there made me feel as though everything in my life was being dismantled.

But the next week, I would always go back. Because even though sometimes I felt destroyed, I also felt supported and understood. These were all women who knew exactly what I had experienced and what I was feeling — and were also experiencing it in their own ways. We shared a struggle we often couldn’t admit to others. We had all been to a deep, dark, and scary as hell place, and even in a roomful of complete strangers, we knew that that was a place nobody should ever have to return to. That commonality gave us a way to become invested in each other’s healing.

From that base level of understanding a feeling of strong and true support eventually grew. We’re all not okay, but we can be not okay together, because we all deserve to feel supported and heal. For the second time in my life, after opening up about my hesitation and fears for the group, I was told by another woman, “I’m so glad you’re here.” Despite our differences, our disagreements, our fundamental misunderstandings and diverse frames of reference, we all saw each other as people worthy of happiness and health.

While eating disorders are about much more than just wanting to change our bodies, there can be a strong current of self-loathing when we try to seize control over them, which is often triggered by other bodies and how we feel we don’t live up to them. Take the way women are too often conditioned to view other women as competition in every facet, but especially in looks, and then add to that disordered eating — but in our group, we saw one another as fellow human beings first. As one woman put it, “We’re just people, and it’s refreshing to be accepted on that level.”

Many of us weren’t really expecting to find this level of support and care in our group. We thought there would be fighting, and nonstop triggering talk; that it would be just another source of anxiety on top of everything we were already going through. That’s what I had believed, at first. But, once again, I was wrong.

“There’s nothing like being held by other women,” someone in my trauma group said. She was speaking figuratively, but as all ten of us nodded our heads, I almost felt as if I were being held. I was safe.

As much as group therapy has helped me, the support I’ve received from DMG has been just as crucial. These two very different communities of women did one simple thing for me, in tandem: they provided a group of supportive people willing to listen and eager to help. Both groups have made me feel safe and worthwhile, more so than I have felt for years. Finding both of these powerful women-focused communities is a huge part of why I now know that I will persevere, and that good things are ahead. I know we’ll still hurt, sometimes. But we’ll be stronger together. 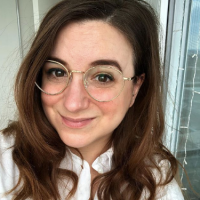 Kaitlin Tremblay is a writer, editor, and gamemaker living in Toronto. Her work has focused on horror, feminism, and mental illness, and can be found on her website. You can follow her on Twitter @kait_zilla.