Things No One Tells You About Cancer

These are facts: three years ago you were 23, you were in graduate school, and you had cancer. This wasn’t always the case, of course, but that’s what became of you over a single Thanksgiving break. Other facts will emerge over time, many will begin to feel as though they had always been a part of yourself, but these three are constants. You hold them close to yourself.

People say you’re lucky—it’s unheard of, really, to have had this and survive at your age. Typically women with ovarian cancer catch it too late, already bursting into stage four and near-certain death.

Virtually everyone you told—no one at first, and then more as was necessary—told you things. Remedies. Coping strategies. Dietary adjustments. And you listened, made lists and bought books, googled and googled and googled. Sat up late into the night texting your mom about next steps, about stages, and what you were going to do. But there was a vast list of things no one thought to mention, about what was happening now and what would happen shortly and how both of those things would band together to shape the future you.

No one ever tells you, exactly, that you’ll never stop feeling like a patient, that you’ll lug a binder of records to every appointment for years to come. No one mentions the swell of pride you’ll feel when a doctor comments on how organized and annotated that binder is. How much you’ve documented in such a short time.

Each time you pull that binder out or stuff it into your purse or hide it at the back of your bookshelf, you’ll think of going to Target with your mom to pick it out.

“Stripes?” she’ll say. Neither of you ever thought this is how you’d spend a Saturday afternoon.

You’ll think of the spring you moved home after graduating from college, planning on working three jobs to save money for grad school. How you would spend weekends crafting with your mom and watching mindless TV. How you found a rhythm and a friendship that had always been a struggle as you gravitated more toward your dad when you were young. You learned about the time she accidentally killed a duck while golfing, about her hidden accordion-playing skills, about that one time she went rafting out west and almost drowned.

Then, just a year later, you’ll talk to her about things you were always too afraid to bring up: kids and how you will never, ever want one. How you’re scared that after this it’ll be too hard to be loved, that you are defective. How you don’t know to talk about this.

You’ll stay overnight in a hospital for the first time after the second surgery. Your mom, knowing how much you love animals, will bribe the therapy dog with cereal to hop onto your bed and snuggle with you. His name is Wilbur and he’ll stay with you for half an hour before continuing his rounds. He’ll visit twice more before you’re discharged.

“Cheese sticks,” you’ll demand while driving home from the hospital two days later. “That’s what I’m going to have when I can eat again.”

“You can have anything you want,” your mom will answer.

“I want a million cheese sticks. And onion rings.”

“Let’s take it slow, huh? We’ll see how you feel when we get home.” You both chuckle, knowing you’ll be subsisting on popsicles and chipped ice for a few days more at least.

You never get those cheese sticks.

No one tells you that you’ll wait to see your oncologist for a follow-up appointment until one in the morning on a Saturday months later, because he is running late after taking care of patients more critical than you. No one tells you that you’ll accept this with a yawn and without question. You’ll wonder when the last time he cooked a meal was, the last time he left the hospital. You’ll wear your rattiest sweatpants and a billowing shirt with holes at the hem. Your mom will pack a bag with games and snacks and the two of you will sit in the waiting room on sinking couches eating Twizzlers, drinking dollar iced tea from the McDonalds across the street, and playing solitaire. When you sigh heavily—for no real reason, more out of exhaustion than anything—she’ll reach out and hold your hand.

You’ll explain that your mom isn’t a doctor and it wasn’t exactly ethical, her doing an ultrasound on you, but she runs a hospital imaging department and sometimes it’s easier this way. You’ll replay the look on her face when she first spots it and can tell immediately that something was wrong. You’ll remember the silence of the exam room when she leaves to get the radiologist. It’s crushing. Even without confirmation, you know it’s bad.

Months after that scan, you’ll lose an ovary, a fallopian tube, 15 pounds, and the trust in your own body. You’ll become alarmingly good at sticking to a clear liquid diet and develop a sharp distaste for yellow Gatorade. You’ll have to wear long-sleeved sweaters through a sweltering D.C. summer because the bruises on your arms from the IVs and blood draws make you look like a junkie. You’ll gain a promise that this is not over—may never be over—and the unsettling fact that the rest of your womanhood must come out before you turn 30.

You’ll carry with you a bodyful of scars, with 12 alone scattered across your abdomen like a grim constellation. The longest one will dip inward, sitting just above your belly button as a reminder of everything that’s gone so wrong in the last few years.

“Where have you been? What have you been up to?” Breaking myself apart, becoming unrecognizable, you’ll answer.

“How are you?” You can’t really explain.

You’ll lose count of the number of conversations you have about babies and the ones you’ll never have. Doctors will condescend to you, saying you’ll change your mind and that you should freeze your eggs just in case because you just never know. But you do know and you don’t have the money or drive to freeze anything, if only someone would listen to you.

The whole process will be hard, though not as hard as it could have been, and no one tells you that you will feel guilty for not being sicker. You’ll feel guilty for doing this to your mother, especially, for unknowingly having a routine ultrasound become a catalyst for the worst bit of both your lives so far. You’ll apologize and she will console you over the phone, the warmth of her voice radiating from across multiple state lines.

“There’s nothing to be sorry for,” she’ll say. “It’s not like you did this on purpose.”

You can’t answer—you’re crying too hard to get a syllable out—but you can hear her typing on the other end of the line.

“Do you want company this weekend? I can be there on Friday.”

She’ll buy a cheap flight from Detroit and get to you on the east coast in record time. You’ll bury yourselves in blankets on your couch and watch bad movies, venturing outside only for doughnuts and baking supplies. You’ll feel better, having her there.

You’ll talk to her about almost everything—everything except the feeling that you can’t shake that you have no right to be placed in the ‘cancer survivor’ category. No one ever mentions that; the feeling that you’re too ballsy asking for inclusion when you never had a port in your chest, never even lost a hair. Your cancer will never feel cancer-y enough, despite two surgeries and innumerable trips to the hospital. This will deter you from ever joining a support group; instead you choose to self-soothe with ice cream and marathons of medical dramas on DVD.

You’ll look back three years later, amazed that it’s been that long already and try to remember what it was like before. You’ll realize that you can’t.

But you call your mom. You interrupt her while she’s packing to go card-making for a weekend in northern Michigan and you talk about what you baked today. She says she’s excited to come see you in a few weeks. You tell her you love her and you promise to make an appointment for your yearly exam a few months early, just in case.

You get up, you move on, you get past it—even if it feels as though you never will. These are things nobody tells you. 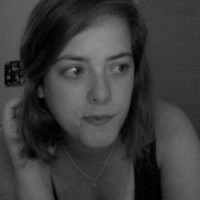 Kate Andries writes short fiction and long essays, but mostly just makes things for the internet for her day job. You can follow her on Twitter, where her tweets arrive like a Great Comet—once every 20 years.