Suggested Activities for Convalescing After a Long Illness

Watch every British murder mystery show ever made. Lie still and listen to the soothing sounds of logical discussion, the chirping of sparrows in the rose garden, and the gentle squish-squashing of viscera when your ailment becomes overwhelming and you can no longer sit with eyes open.

Prop yourself up in the plaza: dispense optimistic, folksy wisdom to townsfolk whether they want to hear it or not.

Commission a mural directly over your bed so you have something to look at. Make it something you will never tire of. Perhaps a tasteful nude portrait of Peter Falk? You are after all, one classy invalid.

Overthrow global economic systems by hacking. Dress like a ’90s club kid and only listen to John Digweed and/or Dieselboy for purposes of authenticity.

Give yourself stick tattoos of arcane information from your medical charts.

Create a Classics Illustrated version of Nathanael West’s A Cool Million: The Dismantling of Lemuel Pitkin.

Finally formalize the spiritual practice of worshipping your parents’ collection of lawn ornaments.

Make a miniature model of the town you grew up in, exquisite in its perfection. Each tiny midcentury ranch house the appropriate shade of slate gray. Each lawn radiating eerie green sameness. Each SUV filled with tiny plasticine nuclear families. Look at their placid smiles. Look at their starched khaki trousers. Oh, these phonies will pay for how you were treated.

Obsessively dust your prized collection of tiny glass animals and quietly, steadfastly try to placate your alcoholic mother and the rage-filled brother who grudgingly provides for you both.

Take up obscure handicrafts: tatting, scrimshaw, quilling, and the like. Embroider tiny bags to sell your wares at craft fairs and online with the slogan “Handmade by an invalid” and, somewhere, the image of an angel’s wings.

Film, star in, and distribute your own telethon from the comfort of your Craftmatic Adjustable Bed!

Become a superfan of murder mystery foley artists. Who made that spongy thudding sound in Columbo Season 10 Episode 14: “Columbo Likes the Nightlife”? Only you can provide this vital information AND the 45-minute description of exactly how it was made and recorded. Just think of how much fun you will be at parties once you are back on your feet! Until then, your murder-mystery-foley-artist fan podcast “Whack Thump ARGH!” will have to do.

Spin a cocoon around yourself out of silk that you secrete from glands near your mouth.

Move to the sewers of Paris, learn to play the pipe organ, invest in only the hippest most au courant facial couture, settle down with a nice opera singer.

Develop the sexy look of a Victorian in the throes of galloping consumption. Your pallid visage, with its blood-red cheeks and lips, your heroin-chic thinness, and the way you sigh so beautifully in between racking coughs will no doubt rend the heart of a suitor. Lock him down now, while he thinks you’re dying!

Serve as an example of sweetness and morality for your more spirited sisters; die.

Discover that the cure for your ailment was “a good attitude.” Sing to yourself every morning and smile until your cheeks ache. If you remain sick, you didn’t smile hard enough.

Begin a correspondence with Robert Browning.

Befriend a housefly that is buzzing around your room. Name him Algernon. Connect your recovery to Algernon. See yourself in him. When he suddenly dies, realize that your recovery is a hollow lie. Sink into a silent torpor and never speak again.

Throw your own funeral. Invite all of your friends and family to make speeches about you as though you are dead, while you stare into their eyes, unblinking.

Learn black magick. Command an army of spiders to fetch your books and bring you mugs of tea.

Be grateful that you’re not a giant cockroach and that your father is not trying to kill you with a newspaper and his cane.

Learn how to build ships in jars. Begin to put other unlikely objects in jars. Build up to putting your house in a jar. Now you live in a jar. Lucky you!

Get really, really good at Quarters. When you are better, you can go to frat parties and make bros get drunk and stumble around for your amusement.

Sit in your front window striking fear and a blossoming sense of mortality into the hearts of the neighborhood children.

If anyone tries to tell you anything you don’t want to hear, have a coughing fit and fall over.

Buy a 19th-century medical dictionary and insist on referring to all ailments in that parlance.

Get eXtreme! Practice until you are the most epic finger skateboarder the world has ever known.

Remain in stasis until you are recovered. Emerge as a beautiful butterfly.

The Klingon language and folkways are not going to learn themselves! 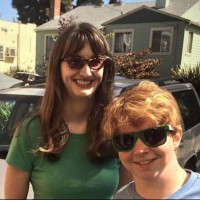 Kristen studies literature in northern California when she's not yelling about history or watching every murder mystery on Netflix. Christine writes about disability and adaptive sports in the moments between recovering from major surgeries, wrestling bears, and baking pies. Kristen and Christine have been friends since fourth grade. They can frequently be found on the phone with each other, laid up in bed, discussing feminist murder mysteries and wilderness survival techniques to pass the time.