Laura Passin will be doing a series of pieces examining the great female poets we have been fortunate enough to share the earth with. Next up: Gwendolyn Brooks.

My religion makes no sense
and does not help me
therefore I pursue it.
(“The Truth About God”)

Anne Carson is a poet of perversities. By that I don’t mean that she writes graphically about sex (though she does) or that she makes art that is unseemly and difficult (though she does that too). What I really mean is that she works on the edges of what’s acceptable, in every book and genre in which she participates. She works most with the parts of life that make no sense and do not help you, only somehow she transforms them into poetry that both fulfills and deranges what you think poems should do. Her poetry books sometimes have essays in them; her books of classical scholarship sometimes have lyric passages that rival anything filed under “poetry.” One of her books is an accordion-folded reproduction of a scrapbook she made as an elegy to her brother; it contains, among other things, a facsimile of a handwritten letter, torn and rearranged into a collage, alongside a translation of Catullus 101. It’s surprising, uncanny work that is utterly distinct in voice and vision. I do not claim to understand it, exactly, but I love it beyond reason, and I urge you, Toasties, to pursue it.

Much of Carson’s work might be described as fan-fiction of the classics (though I suppose that is also true of much of Western literature). Her “TV Men” poems imagine mythic heroes and canonical authors as the stars of their own tv shows. Hektor becomes the star of a show about the Trojan War who must reenact the great battles for a demanding director:

for Troy a source of food, a cause for exultation in prayer,
a likeness of God,
a human glory.

that stains on the back of his clothing will be visible
from the helicopter as he turns
to run.

Carson’s poetry works a strange magic, as you can see in the passage above; she is adept at weaving together the stately and the banal. She will plunge you deep into some impossible territory (Hektor on a late-20th-century film set) until you no longer remember its impossibility, and then she will hit you with something so unexpectedly profound it feels brutal. TV is made of light, like shame. You can never think of shame the same way again.

If I ever write something so precise, so exactly in tune with the worst codependence people can experience, I can die happy. And then you can make another me to tell it to.

For me, in fact, reading Carson made me never think of anything the same way again. When I was a 22-year-old baby poet struggling to write about sexuality and the sublime, my professor told me one book would mean the world to me: Anne Carson’s Eros the Bittersweet. She was not wrong; my copy is now battered and dog-eared and scribbled over in years’ worth of different hues of ink. This is a deeply weird book, one of two books of literary theory that have made me sob (the other is Maggie Nelson’s The Argonauts). At once a philological examination of just what classical poets meant by “eros” and a deeply beautiful meditation on desire and identity, Eros the Bittersweet is scholarship that reads like poetry. The bittersweetness of eros, according to Carson, arises from the impossibility of its true fulfillment, which is analogous to the unending human desire for knowledge. In an elegant formulation: “It is the edge separating my tongue from the taste for which it longs that teaches me what an edge is.” In a more blunt formulation: “Words do have edges. So do you.”

Carson is aware of the unsettling nature of her approach to classical literature and how the poetic freedom she allows herself might make other scholars suspicious of her work. But that’s what’s so vital about it, to this contemporary reader: she’s not simply concerned with tracking how things were but how things are, and she insists that anachronism is one way of finding new truths. In the essay “The Gender of Sound,” from Glass, Irony and God, Carson writes:

I have cast my net rather wide and have mingled evidence from different periods of time and different forms of cultural expression–in a way that reviewers of my work like to dismiss as ethnographic naïveté. I think there is a place for naïveté in ethnography, at the very least as an irritant.

What happens when you take one of the great myths of masculine strength–Herakles/Hercules–and ask what it tells us about male desire in the contemporary world? One answer is Carson’s best-known book, Autobiography of Red, which is a verse novel that retells Herakles’s tenth labor from the point of view of Geryon, the monster he must defeat. Carson’s Geryon is a gay teenage boy lovesick for the dashing Herakles… but he’s also still a red-skinned, winged monster. It’s not clear which condition is more alienating. Rather than slaying Geryon, Herakles uses him up: he has a love affair with him and then leaves him. It’s not easy to describe the power of this book; in fact, it sounds ridiculous. But that’s the point! That’s the naïveté that serves as an irritant to our oldest stories: what happens when we make men into gods?

As this question suggests, one of Carson’s underlying subjects is patriarchy itself, how it warps your every action and your sense of self at the deepest level. One of my favorite of her books is called The Beauty of the Husband (inscrutable subtitle: “a fictional essay in 29 tangos”), which traces the marriage of a woman paralyzed with desire for her feckless but deeply beautiful husband. Somehow, it’s also a study of Keats’s famous (inscrutable) line “Beauty is truth, truth beauty.” (Again, I am utterly failing to describe this book with any fidelity.) Eros is definitely bittersweet here. Behold one of the best poetic sex scenes I’ve ever read (the young lovers have been crushing grapes for wine, stomping with their feet):

You cannot imagine the feeling if you have never done it–
like hard bulbs of wet red satin exploding under your feet,
between your toes and up your legs arms face splashing everywhere–
It goes right through your clothes you know he said as we slogged up and down

in the vat.
When you take them off
you’ll have juice all over.
His eyes moved onto me then he said Let’s check.
Naked in the stone place it was true, sticky stains, skin, I lay on the hay

and he licked.
Licked it off.
Ran out and got more dregs in his hands and smeared
it on my knees neck belly licking. Plucking. Diving.
Tongue is the smell of October to me.

About 25 pages later, the same couple (decades later) have perhaps my favorite exchange in the book, as the husband is about to leave his wife for the nth time:

Well he said.
Do you know she began.
What.
If I could kill you I would then have to make another exactly like you.
Why.
To tell it to.

In my humble poetic opinion, this is fucking wizardry. If I ever write something so precise, so exactly in tune with the worst codependence people can experience, I can die happy. And then you can make another me to tell it to.

Now listen, I get that not everyone feels like they get poetry. So I realize how ridiculous the following statement will sound. I implore you anyway: if you read nothing else by Anne Carson, please read her 40-page poem called “The Glass Essay” (from Glass, Irony and God). It’s not easy going, exactly, but it’s spectacular, and it’s unlike anything you’ve ever read (and better than most things you have, I’d guess). I can’t possibly summarize it, so instead I will make a list of things I think Toasties in particular will enjoy about it:

If you’ve never read a 40-page poem before, well, this is the one you’ve been waiting for. I can’t tell you how much this poem means to me, and how many times I’ve come back to it when my life has thrown me into madness. If you’ve read Leslie Jamison’s book The Empathy Exams, this is the poem around which she structures some of the life-changingly great essay “Grand Unified Theory of Female Pain.” When the speaker recounts the moment that Law broke up with her (“Not enough spin on it, / he said of our five years of love”), she takes all her clothes off and has sex with him. She does not elide her own abject response: she knows this is humiliating, but she also knows that desire is humiliation:

thrusting my little burning red backside like a baboon
at a man who no longer cherished me.
There was no area of my mind

not appalled by this action, no part of my body
that could have done otherwise.
But to talk of mind and body begs the question.

This self-awareness, this ability to both create a fully emotionally realized poetic situation and still see it from the outside, is one of Carson’s greatest talents. Like her “naïveté” and anachronisms, this self-scrutiny allows her to write movingly about what might otherwise seem done to death–after all, didn’t Sappho pretty much nail “eros the bittersweet” a few thousand years ago?

The pain of love and desire and ignorance and death does not feel old, though, and Carson knows it. We carry all these experiences with us even when they feel cliche or mediated through patriarchy or just a wobbly echo of something someone else, probably a Brontë, said better hundreds of years before we were born. We can’t stop carrying our bittersweet selves. From “The Glass Essay”: 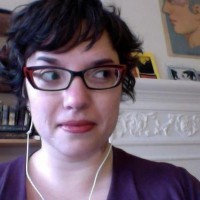