The Life and Death of Edmonia Lewis, Spinster and Sculptor

On the green, cross-studded grounds of St. Mary’s Roman Catholic Cemetery, in London, grave C350 is covered with a moss-pocked slab of stone bare of any writing. The granite rectangle is nearly flush with the earth. Parish records confirm that underneath it lie the bones of Edmonia Lewis, American sculptor, who was buried there for a fee of five pounds and fifty-two pence in 1907.

Lewis in her lifetime was an enigmatic, singular figure, a maker of art in pristine marble. Though highly educated, she allowed the contemporary press to portray her as a naïf savant; though black and female, she succeeded in exhibiting her sculpture alongside the upper crust on both sides of the Atlantic.

“No matter what frame you put around her, she was unique and succeeded against the odds,” Karen Lemmey, curator of sculpture at the Smithsonian Museum, which owns several pieces of Lewis’s work, said. “But there’s this kind of vagueness to the details of her life.”

Born in obscurity in upstate New York, Lewis was celebrated for her work, and surrounded by a mythos partially of her own making, until fading back into obscurity. Tantalizing hints of her life, along with her tableaux in marble, survive her—and have inspired researchers to dedicate years to unearthing the mysteries that remain.

Perhaps chief among Lewis scholars is Marilyn Richardson, 72, a retired professor. Richardson began researching Lewis in the 1980s, and has pursued the elusive artist for half a lifetime – from Boston to Rome, London and beyond.

“She was supposedly raised in the wilds of upstate New York by a renegade band of Ojibwe Indians, but somehow ended up at Oberlin College,” Richardson told me. Lewis saw Robert Gould Shaw march with the all-black 54th Regiment during the Civil War on their way to the Carolinas. “Then she turned up in Florence, Italy, and was an overnight sensation in Rome in the 1860s.”

Little is available by way of documentation of Lewis’s early life, but the nineteenth-century press provides a gripping narrative of her early years. An early orphan, she was “reared among the Indians,” her mother’s relations, and given the name Wildfire. A brief stint in the abolitionist hotbed of McGrawville, in upstate New York, led her to another focal point of early American progressivism: Oberlin, Ohio, where she began studies at Oberlin College in 1859. While at Oberlin, Lewis found herself embroiled in a violent and titillating scandal that would presumably have derailed the nascent career of someone without her savvy. In her third year at the college, where she had begun to study art, she was accused of poisoning two white female classmates with cantharides, commonly known as Spanish fly. Cantharides, compounds derived from blister beetles, have been used as aphrodisiacs for centuries; though highly toxic, in small quantities they can induce itching and burning in the genitals, an effect that has long been (perhaps wishfully) mistaken for arousal.

On January 27, 1862, Lewis had served them mulled wine—which she had obtained, somewhat mysteriously, in a dry town, and while living in the house of a church deacon—before her classmates set out on a sleigh ride with two gentleman callers. On the disastrous ride out of Oberlin, the two girls became violently, uncontrollably nauseated; the blame was placed on Lewis. Before her trial, she was dragged to a field and beaten by a white mob. In court, she presented herself in crutches, her collarbone shattered. She was represented at trial by John Mercer Langston, who would go on to become the first African-American elected to public office in the United States and a founding dean of Howard Law School. Langston pointed out that the stomach contents of the girls had never been tested, and Lewis was acquitted. But scandal continued to dog her at the college, which did not allow her to re-register for courses in 1863. (Today, The Edmonia Lewis Center for Women and Transgender People at Oberlin espouses “anti-sexism, anti-classism, anti-racism, anti-imperialism, anti-heterosexism, and anti-transphobia”; on its website, the Center notes that Lewis left the school, “in part, due to harassment.”)

After the early termination of her studies, Lewis set off from Oberlin to Boston. While in Boston, she impressed her artistic aspirations on famed abolitionist William Lloyd Garrison, who arranged for her to be mentored by a local sculptor. Sales of a bust of Robert Gould Shaw she created in 1864 funded a one-way ticket to Rome. In Italy, she created a body of work circumscribed by an unusual artistic proclivity: unlike many other sculptors at the time, she did not use tradesmen to chisel her work according to instruction, carving instead by hand. (Lemmey explained that for this reason, fewer examples and duplicates of Lewis’s work survive than other sculptors of the period.) She created sculptures inspired by Longfellow’s The Song of Hiawatha, by the experiences of freed slaves; in one sculpture, Hagar, the cast-off concubine of Abraham, clasps work-thickened hands to her half-bare breast. In Rome and its environs, Lewis moved in a circle of expatriate women sculptors of the era, drawn to Italy by the promise of abundant, expertly quarried marble. Henry James once dismissively described this circle as “the white marmorean flock.”

But it was Lewis’s nonwhite status that figured most prominently in her portrayal in the contemporary press: one 1866 interview lauded her talent while simultaneously noting how she “prattles like a child,” with her “crisp hair and thick lips.” Another account from the period describes her as a “curious and exceptional example of native artistic ability.” Despite her uncommonly advanced education at Oberlin, contemporary sources cite an origin myth in which Lewis, an untutored, “childlike” naïf, was so enraptured at the sight of a statue of Benjamin Franklin that she is quoted as saying, “I, too, can make a stone man.” Richardson suggests that this portrayal in the press was not incidental; not only did Lewis sometimes benefit from the exaggerated exoticism of her portrayal, the notion that she had emerged whole, like Aphrodite, from the sea of ignorance, allowed her to obscure any scandal in her past.

“She worked both sides of the street, depending on her audience and her patrons,” Richardson said. “She emphasized her blackness or her Native American origins. She was very savvy about how to keep her identity in play.”

By the end of the nineteenth century, however, Lewis’s signature Neoclassical style had fallen out of favor in the artistic avant-garde, and the center of gravity of contemporary sculpture had shifted from Rome to Paris. By 1901, Lewis’s whereabouts were unknown to the public: in response to a query about Lewis, the editor of an art magazine noted, “There seems to be no trace of her in Rome.” In fact, she had left the city behind, and whether she ceased to court the press or the press ceased to court her, her prior fame faded almost completely.

No trace was known of her last years – in Rome or elsewhere — for over a century, and the place of her burial was unknown. Richardson, however, had never ceased looking, and the digitization of records worldwide enabled decades of research to bear fruit.

A 1901 census record revealed to Richardson that Edmonia Lewis had relocated from Rome to London, and subsequent research with the aid of U.K lawyer Scott Varland uncovered Lewis’s will and burial records. Lewis had died in Hammersmith Infirmary, in London, of Bright’s disease, a chronic and excruciating kidney ailment; from there, she had been taken to the cemetery at Harrow Road.

Richardson sees her research as part and parcel with the efforts of other black women scholars: after all, she noted, Alice Walker found Zora Neale Hurston’s grave, “out in the long grass.” “So I’ve become a cemetery sleuth,” she added wryly.

In her will, Lewis identified herself as a “Spinster and Sculptor.” She asked for a dark walnut coffin, and that a notice of her death be printed in the Tablet, a British Roman Catholic publication. The resulting announcement – a curt sentence fragment – made no mention of her accomplishments, and did not reach those who sought her across the sea, until, over a century later, it found Richardson.

This is not the first major discovery Richardson has made over the course of her research into Lewis’s life and work. In 1988, she was instrumental in restoring Lewis’s most famous work to the public eye.

In the 1980s, Richardson explained, scholars focused on two of Lewis’s works in particular: an 1867 group called “Forever Free,” housed at Howard University, which depicted a black man and woman, in marble, holding up their broken chains; and “The Death of Cleopatra,” a mammoth composition of Cleopatra’s last moments, which had featured in many contemporary accounts of the Philadelphia Exposition but whose whereabouts were unknown.

In 1988, Frank Orland, a dentist from the Forest Park neighborhood of Chicago, wrote in to the Metropolitan Museum, inquiring about the artist Edmonia Lewis. He had a piece of work by her, he said, and described it. An enterprising curator forwarded the letter to Richardson, who had put out a query in the New York Times Book Review asking after Lewis; when Orland dodged her repeated calls, she hopped on a plane to O’Hare.

When she tracked down the dentist at his home address – “I was willing to camp out on his front steps if he wasn’t going to cooperate,” Richardson told me; “Fortunately, his wife was home” – he agreed to lead her to the statue.

In the storage area of a nearby shopping mall, to which Orland had the key, Richardson saw the lost work for the first time.

“It was just standing there in the storage area, surrounded by holiday decorations and papier-mâché turkeys and Christmas lights and Christmas elves,” Richardson said. “I was shaking.”

Richardson teamed up with legendary librarian and bibliographer Dorothy Porter, and together they contacted the Smithsonian Museum and the Art Institute of Chicago. After comprehensive restoration, the statue now stands in the Smithsonian American Art Museum’s Luce Foundation Center, where Cleopatra’s unblemished face turns up, perpetually, towards the vaulted ceiling.

Earlier this summer, Richardson said, she ran into a colleague familiar with her long search for the last years of Edmonia Lewis.

Now all that’s missing is a plaque. 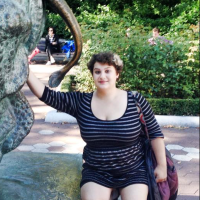 Talia Lavin is a fact checker at the New Yorker who loves art and dogs, but owns neither. She was a Fulbright fellow in 2013 and came in third place on Jeopardy! in September.