“Not So Bad”: On Consent, Non-Consent, and Trauma

It was not violent, even though it hurt.

I was not drugged, even though I was drunk.

I did not get anything I hadn’t asked for.

Love was the preoccupation of my girlhood. I used to fall in love all the time. I fell in love with friends, with movie stars, with characters in books. I devoted entire diaries to it: Someday my prince will come. Some day there will be a big love, a grand love, a love to make me feel less alone.

I was raised Catholic, so I used to think – well into high school, even – that I would wait until marriage before having sex. Then I thought I would wait, at least, until I was in love. Sex was a mysterious and frightening thing, a sacred thing, a way of communicating more than just words and emotions. It was a way out of loneliness – to be naked with another human; to be bare yet safe.

In high school, my friends and I used to be the biggest bunch of virgins you’d ever meet, nerds who didn’t know how to touch, how to enjoy a kiss.

But once we got to college, virgins started dropping like flies. Except for me. So I went out one night and I drank four glasses of wine with my fiction class. I announced to everyone, including my professor, that I was very drunk. I informed a close friend that I was going to take one of the guys home with me. “Tonight Is The Night,” I said. She said she didn’t think it was a good idea. I did it anyway.

I don’t think there is a woman among my friends who hasn’t been assaulted in some way, by either friend or stranger, by someone they trusted or someone whose face they’d never seen before. We have all been hurt. And part of me thinks, cynically, bitterly, that that’s just the way it is. Suck it up, buttercup. You get hurt. You hold ice to the bruise, numb the sensation, rub the site of impact until the pain disperses. You move on. You try to stay out of harm’s way.

Or sometimes you hurt yourself before anyone else has the chance to. Then it’s nobody’s fault but your own.

And isn’t there power in that?

At least it’s over with.

I got exactly what I asked for.

This is what is harder to say:

I changed my mind the moment before. My body changed my mind for me; after the four glasses of wine, and the groping in the cab, and the finally, finally pounding with my heart, my body hesitated.

But still, I did not say no. Or stop. Or wait. Or maybe we’d better not.

He said, “You’re such a tease,” which, all things considered, seemed like a fair assessment.

My mother tells me that when I was a kid I had a mantra for dealing with doctors’ appointments. She says it fairly often, like it’s a favorite memory of hers. Me as a little girl, shaking in the cold of the office, and small, small, small.

Repeating, a litany: “Not so bad, not so bad.” Over and over.

I texted my friends the next morning, proud and in pain. They were, none of them, impressed.

I made him coffee.

I walked him downstairs.

He kissed me goodbye in front of the dormitory security guards, a gesture both unnecessary and strange, incongruent with the way he had touched me the night before.

He called me a few hours later. I was sitting in my poetry class, surprised to see his name light up on my phone, simultaneously pleased and ashamed.

He asked if I was okay.

I kept asking for it.

I learned to move properly, to make the right sounds.

Each time, I learned a little more how to go away.

One time, tired, he said we could just cuddle instead. He was gentle. (Unnecessary and strange.) He kissed me, slow and thorough. I kissed him back hard. I bit his lip until it bled. I made him fuck me.

Nobody ever has a good first time.

I said, come over. Come.

Somewhere in the middle, I travel to Spain. I have sex with a boy who is younger than me. His mother says to him on the first day, no toques la Americana, and it is a rule that I know immediately I’ll break. He calls me diosa and introduces me to his friends. He treats me like he can’t believe his luck, and he cries when I leave.

I come back to what I know.

I write in my diary, sex is a thing you can do with your body sometimes, if you choose to. An activity divorced from the quality of the act. It doesn’t matter.

Somewhere along the way, I stopped writing about love.

My mother taught my brother and me how to say no. Over and over when we were children, she would ask us: “What do you say when someone touches you where you don’t want to be touched?” And we would shout, giggling, no! no! no!

Adrienne Rich writes about a spider:

“…I recognize in her
impatience – my own –

the passion to make and make again
where such unmaking reigns

am I to go on saying
for myself, for her

This is my body,
take and destroy it?”

But what if you unmake, and unmake, obsessed with the unraveling? I remember there would be months in between each time we fucked. I thought that meant I was better. What kind of woman, after all, chooses a sex life like this?

I deleted his number from my phone but somehow, drunk, I was always able to recall it. If he ignored my transparent come-ons, I was irate. I told him so: “I hate the way you fuck me.” Regardless, inevitably he would come. What kind of man chooses a sex life like this?

One night I stayed at my parents’ apartment, my mother asleep beside me in my childhood bedroom. I stared at the screen of my phone glowing as I waited for his response. Thinking, over and over:

Show me what this body is for.

It ended eventually but simply with a new apartment. A safe and sacred place. The apartment was warm and small. I learned to be alone there. For years I am alone, and lonely, my body a thing that eats and sleeps, that doesn’t touch itself and isn’t touched.

Sex is a thing you can do with your body sometimes, if you choose to.

When it gets boring in the middle, just wait until it’s over.

This can be a good time to make grocery lists, to think of a reply to that email, to remind yourself to feed the dog.

The first woman who ever told me she loved me thought my first time was something it was not, and told me so. We talked around the word. She asked questions. “Do you think he knew he was hurting you?” “Do you think, if you had asked, he would have stopped?”

I said, I insisted, it hurt, but he didn’t hurt me.

I said, what does it matter, I never asked him to stop.

I thought of my body’s hesitation. A small but noticeable thing.

I thought of all the times my mother told me how everything shows, helplessly, on my face.

She asked me, “What would you say if another woman told you this story?”

I try to say kind things.

I listen to her heartbeat. I say, “The statute of limitations for feeling bad about this is up” and we laugh until I’m crying.

A friend of mine, Elle, and I talked recently about sex and society. How consensual sex can still be traumatic. How the lines between consent and non-consent are frequently blurred, particularly for young women, particularly during their most formative experiences. We agreed that we don’t have enough words, the right words, the language.

Around the same time I worked with a photographer on a project about sexual violence. She told me that it is always black and white, that the edges of a violation are always firmly drawn (in ink, in stone, in anything but sand), as if we could point to our respective experiences on a map and find them in difference hemispheres. I felt wounded even as I agreed.

Sex can be both consensual and traumatic, that’s true. But you lay on me with the full weight of your body, and the weight of your words and everything behind them: “You’re such a tease.”

Don’t be such a tease.

Don’t be such a tease.

The worst thing a girl can be.

What is a woman’s body for, after all? Show me what this body is for.

I wonder what Elle teaches her daughter. What does she tell her daughter that her young body is for? My mother taught me to say no! loudly, firmly, to protect myself from strangers who might hurt me in obvious ways.

But a woman is not a child, and the world is subtle. Nobody teaches us to say, maybe. To say, I’m not sure. Please wait. On second thought, maybe we shouldn’t. On second thought, I don’t want this. I’m not ready. To say, touch me a little longer first. Touch me at all. Be gentle. Go slow. Nobody teaches us to protect ourselves from selfish drunk boys who are not taught to recognize hesitation as anything other than another boundary to be skirted, a roadblock on the separate map from which they learned to navigate.

The older I get, the more I am certain that every woman in the world has had an experience like this. My mother, my grandmother. Girlfriends and ex-girlfriends and friends. It comes up in conversations with women I’ve only just met, thousands of miles from my home, sometimes minutes within knowing each other. The actress Loretta Young, shortly before her death, learned the words date rape and discovered a name for the place Clark Gable had taken her decades ago, an act that changed her life.

We know it before there are words for it. We know it when there aren’t words to describe exactly what happened. The edges of a violation are not drawn in ink or stone or sand. They aren’t even written on the body, not always. The statute of limitations for feeling bad about this is up, but when my current girlfriend and I talked about sexual objectification – how everyone does it: is made an object and objectifies others, even the people they love – I was surprised into being there again, gone away from my body as it was fucked, and I had to hide in the bathroom and take deep breaths and say to myself, over and over, Not so bad, not so bad, not so bad. 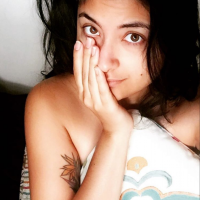 Christina Tesoro lives and writes in NYC, in an apartment with too many animals or just enough. She tweets, sparsely, @storyqday.