An (Abridged) History of Red Lipstick

Most trends – brown lipstick, heavy blush, that period of time in the late ’90s when we all collectively decided that we should wear a lot of frosted blue eye shadow with no liner – are evocative of an era, while others – such as red lipstick – survive no matter what other kind of bonkers looks are going on (see: all of the 1980s. Seriously, I don’t know why anyone ever thought that much blush was a good idea). I hate using the word “timeless” because it reminds me too much of other words I hate, such as “bliss” and anything else that could be used in an inspirational saying, but red lipstick is one of the few makeup looks that has always remained current no matter the era.

Lipstick itself dates back to Queen Schub-ad or Puabi of Ur, a Sumerian ruler around 2500 B.C. The first documented lip tint was made with pulverized red rocks and white lead (this was not the last time people were like, “Check out all this sweet lead! Hey, what if we put it on our mouths oh god I’m dying”). Many early lip colours were made from things that would be inadvisable to glob on, such as crushed ants and carmine beetles in ancient Egypt or crocodile feces and sheep sweat in ancient Greece (NOTE: How do you even collect that? Do you, like, get the sheep to wear little sweatbands and then wring them out?). There was also more colour variation than one would think: In ancient Egypt, popular colours outside of red included orange and indigo, which means that the ancient Egyptians were the original goth kids.

In parts of Asia, red “lipstick” was also an early cosmetic. In China, nail colour was the main cosmetic used by the upper classes, but the first lipsticks (the earliest ones were created around A.D. 25) were made with a beeswax base as a way to protect the skin around the lips, with people adding scented oils to make them smell nicer and red pigments made out of crushed plants, blood, or vermillion. The way that lipstick was applied also changed drastically from dynasty to dynasty — during the Qin Dynasty (221 to 206 B.C.), for example, women would paint a large dot on the lower lip and a point on the upper lip; during the Sui (581 to 618) and Tang (618 to 907) Dynasties, they would paint the shape of a cherry.

In Japan (starting in the Heian period), geisha were the most visible users of makeup. They would use mashed safflower petals to create a pigment to colour their lips, starting around 1600 in the Edo period (FUN FACT: Many geisha used lead-based products to lighten the skin on their face, neck, and chest. Someone should really go back in time to tell people that smearing lead all over their faces is a terrible, terrible idea). For geisha, the way that lip pigments were applied depended on the stage they were at in their training, and whether or not they were considered a new full-fledged geisha or a more experienced one (shown by painting only the upper or lower lip, for example). Aside from geisha, lip colour went in and out of popularity in Japan; during the Edo period, some women would pair red lip rouge along with white face powder and blackened teeth, proving yet again that early makeup trends were way, way more metal than anything we do now.

Two of the big players in lipstick trends during the 1300s-1900s were England and France. While France was relatively permissive and lip rouge was a consistent trend there throughout various eras (with Guerlain being one of the most popular brands), England had a weird back-and-forth relationship with lip colour, ranging from Totally Cool to STOP USING IT RIGHT NOW YOUNG LADY. During the Dark and Middle Ages, lip rouge was worn by lower-class people in various European countries, including England, Germany, Spain, and Ireland. They used herbal and plant-based dyes to redden their lips. The Church did not look fondly upon this, and deemed the look to be “Satanic” (“Don’t you dare rebel, young lady!” “Screw you, Mom, I’m going to wear these crushed rose petals! HAIL SATAN”).

By the 1500s, things began to change. Queen Elizabeth I was a dedicated devotee of lip rouge, to the point where she believed that it had healing powers and even the ability to ward off death (incidentally, I’m going to make a red lipstick called “DEATH STOPPER”), although this faith was misplaced as one of the main ingredients was white lead. By the time of her death, her lips were caked in lip rouge, due to her habit of applying it in an attempt to feel better. After her death, lipstick went back to being a symbol of “questionable” morals — but while the clergy and some lawmakers approached lip colour with the sort of generalized disgust with which most people today approach gas station toilets, many women (and some men) still wore lip rouge through the 1600s, albeit in a much more subtle way. By 1770, British Parliament declared that women who wore makeup and “seduced men” by using it would have their marriages annulled and also be accused of witchcraft. (So basically, if anyone asks you how your got your lips to look so nice, you should just wave your hands around and go, “It’s EYE OF NEWT, MUAHAHAHAHA.”)

When the first twist-up lipstick tube was invented in 1915, lipstick became even more popular, as it was now much easier to carry around, versus before when it was found in small compacts or wrapped in paper. It was part of Frida Kahlo’s trademark look, paired with the power brows that would give even the most ardent Instagram MUA a run for their money. In a number of letters that she wrote to her husband Diego Rivera, Kahlo would end the letters with a series of kiss marks across the bottom, ephemeral marks left by a tumultuous and ephemeral life.

In the 20th century, red lips were universal almost everywhere in the world. In India, while the early 1900s saw most women wearing very light makeup and little in the way of lip colour, red lips (along with strong brows and lined eyes) were a common look by the mid 1920s (and continued to be from that point on). In modern Japan, red lips were popular during the 1930s, 1950s, 1980s, and are recently becoming popular again after a long period of more subdued hues and glosses. In Mexico, while women in the early 1900s were generally quite fresh-faced (partly due to the fact that there was a revolution happening), red lips and looks inspired by US-trends were more prevalent.

Through the 1930s, ’40s, and into the ’50s, red lips were THE thing. Who needs eye shadow or liner when you can have LIPS, ALL OF THE LIPS? While red lipstick has always been a symbol of status, sensuality, and the desire to smear stuff on your face, it did take on a slightly different role during WWII — for women working in roles that were traditionally of a more “masculine” bent, the lipstick was a way to reinforce traditional femininity while also giving women something that gave some sense of normalcy. Lipstick shades during the war also came with patriotic names and packaging, which worked in two ways: 1) it turned the item into a sort of symbol of power, and 2) apparently Hitler straight-up hated lipstick, especially red lipstick, so wearing lipstick was like a big “SUCK IT HITLER.”

When makeup companies started expanding their ranges and focusing on new types of products and formulas, red lipstick became just a staple, hanging out in the background amidst over colors but still omnipresent. Full, filled-in lips are the most dominant trend during the 20th/21st century (with the main change being the occasional overdrawn upper lip, such as in the US and western Europe in the 1930s). One example of an outlier, however, is the recent gradient lips trend in South Korea. While Korean trends tended to mimic North American ones in past decades (and red lipstick has been a mainstay in South Korean looks from the 1940s onwards), the more recent trend of using a red or pinky lip stain to create a gradient from the inner part of the lips outwards has been slowly catching on in other countries (think lips that have been bitten, or stained eating a popsicle, albeit in a way that creates a soft gradient on the mouth and not a sticky mess all over your shirt — unless you’re me and you spill an entire bottle of Benetint down your front).

Red lips haven’t gone anywhere and won’t be going anywhere any time soon. Some say it’s because red is a powerful, classic colour that is always in fashion. Others say it’s because red lips signify aroused labia (those people are anthropologists, and they are either the best or the worst people to have at parties). Maybe it’s a combination of the two. Either way, it just looks great.

Reading Our Lips: The History of Lipstick Regulation in Western Seats of Power

“Speak Softly and Carry a Lipstick”: Government Influence on Female Sexuality through Cosmetics During WWII 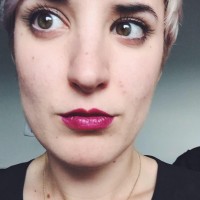 Alex Nursall is a writer and illustrator living in Toronto. Aside from makeup, she is also into the Nashville Predators, Liverpool FC, and moody CanLit.