Beyond Surviving: On Sexual Violence, Moral Injury, and Jessica Jones

I had never heard of Jessica Jones until a few weeks ago when I spotted a headline on io9. A Netflix series about a hard-drinking woman PI who also happens to have serious super powers? I was intrigued. I have long enjoyed comic books, though the overwhelming explosion of superhero media in the last ten years has left me mostly cold and uninterested. All of it seemed to blow up around the time I was beginning to long for slower-paced, more compelling stories. Adult stories about adult people — preferably adult women — with a feminist bent.

On a whim, I decided to watch Jessica Jones. And I found what I’d been longing for: an adult story about an adult woman with a feminist bent. I realized something else as I was watching: Jessica Jones had experienced moral injury.

The term “moral injury” was coined in 2009 by the Veterans’ Administration in response to the growing number of American soldiers returning from Iraq and Afghanistan in serious emotional distress over what they had done, what they had witnessed, or what had been done to them or their fellow soldiers. Moral injury is defined as “a construct that describes extreme and unprecedented life experience including the harmful aftermath of exposure to such events. Events are considered morally injurious if they ‘transgress deeply held moral beliefs and expectations.’” When our deepest beliefs and values are violated by our own actions or the actions of others, or when extremely difficult decisions are made in ethically foggy situations, it can have serious, painful, and long-term effects, both mental and physical.

Moral injury often appears with PTSD, the two like unholy twins. They share many of the same symptoms: anxiety, depression, anger, self-medication, sleep disturbances. But the appearance of one will not always mean the other is present. And just as the stand-alone symptoms of PTSD can reinforce the shared symptoms without the presence of moral injury, so moral injury’s stand-alone symptoms of grief, sorrow, alienation, regret, and shame can reinforce the sleepless nights where anxiety is clawing one’s throat and the days spent feeling deeply depressed and alone.

As I watched the show, it became clear that Jessica Jones was living with both unholy twins thanks to her time under the control of the psychopathic mind-controller Kilgrave. Yet it was her moral injury that leapt out at me with every scene. She had been forced to do things she didn’t want to do, things that violated her own sense of right and wrong. She had been forced to have sex with Kilgrave, whose attempts to manipulate her into thinking she had to be his conscience and “save” him through her love might as well be labeled Emotional Abuse 101. The consequences of his abuse are obvious: she drinks all the time and barely sleeps. She longs for some kind of connection, which she briefly indulges with Luke Cage, but most of the time keeps everyone beyond arm’s length (with the exception of Trish, her adopted sister and best friend, who refuses Jessica’s self-imposed universal restraining order). She feels guilty for murdering Reva Connors at the order of Kilgrave; she feels shame for being unable to escape Kilgrave’s clutches for so long while he tormented her and used her to torment others.

Moral injury may be a relatively new concept, but it is evident that soldiers have experienced it as long as there has been war. Dr. Jonathan Shay has written two books linking the experiences of returning Vietnam War veterans with the stories of Greek and Trojan soldiers in The Iliad and The Odyssey. When I attended a lecture on moral injury by Dr. Rita Nakashima Brock this past fall, she explained how this concept can be applied to people in many professions who encounter difficult ethical situations, such as doctors, lawyers, social workers, and others in helping professions. Listening to her talk, it struck me that it might apply to domestic violence survivors as well.

Those who have lived through domestic violence and sexual assault have experienced extremely challenging and unprecedented life experiences. Many of them have been in situations that transgress their deeply held moral beliefs and expectations. They have had terrible things done to them by people they might have loved and who they believe should have loved them. For those who have been assaulted by strangers or acquaintances, love may not be part of the equation, but there is still the sense that you should be able to go through life without someone harming or violating you — this is part of the basic social contract with which we all live. People who survive these violent situations face the cognitive dissonance of trying to assert and reassert their human identity in the face of a situation and/or person that has treated them as less than human, as undeserving of humanity.

It is a source of untold anguish and pain that can take years to heal, if it ever heals at all. Survivors can feel an enormous amount of shame over what was done, the feeling that they brought it upon themselves, the feeling that they should have done more to stop it somehow, the feeling that they may have deserved it, the feeling that they didn’t deserve it but why why why did it happen, why them? There can be shame for loving or caring about the person who hurt them. There can be shame for not being able to heal faster or just “get over it.” There can be guilt or shame for being part of the perpetrator’s manipulations, for not knowing how to leave, for turning the abuser into the authorities or leaving the relationship. There is often alienation for not realizing what was happening. There might be blame for not being able to “fix” the abuser. For survivors of domestic or sexual violence, the concept of right and wrong can be destabilized as well: Is it still wrong if he says he loves me? If I yelled and threw things too, does that make me as bad as her? The survivor is left to wander in a fog of uncertainty about themselves, about the person or people who hurt them, and how concepts of morality, apology, redress, repentance, and forgiveness are supposed to function. None of these are fair burdens for survivors to bear, yet many do.

People in a survivor’s life can help to alleviate or reinforce the sense of moral injury. Some help by listening, reassuring the person of their own worth, reminding them they aren’t alone, and helping them to get back on their feet and get whatever help and support they need to heal. In Jessica Jones, Trish Walker tried to play this role as much as Jessica allowed her to. There were times when I felt that Trish trespassed on Jessica’s boundaries — mostly because it was expedient for the storyline — but overall, I felt Trish was an example of someone who was trying to alleviate rather than reinforce Jessica’s burden.

Then there are those who reinforce the moral injury in several ways — by minimizing the abuse, pushing for a quick resolution, or agreeing with the abuser. Minimizing the abuse might take the form of disbelief, denial, or thinking that what happened “wasn’t that bad.” Pushing for a quick resolution might include pressing a survivor to forgive the abuser before the survivor is ready, or expecting the person to “get over it” and being upset if they are not doing so quickly. A person could also reinforce moral injury by siding with the abuser and saying or implying that the survivor deserved the abuse/violation, either for behaving in a certain way or for not leaving the relationship. All of these reactions deny the survivor’s humanity and dishonor their agency as they seek their own path to healing.

This leads us to a very important question: How can survivors be healed after experiencing moral injury? Obviously, the choice Jessica Jones made to kill her abuser exists in the realm of a comic book/television show, where consequences differ from those of reality. One could argue that this action didn’t heal her moral injury; it just kept the injury from growing larger and more grotesque with Kilgrave’s pursuit of her. It is not a route that one could take without suffering dire consequences, legally and morally, but it is one that some survivors feel they have no choice but to take. We have to acknowledge that our society has done a terrible job of keeping domestic violence and sexual assault survivors safe from further violations and even death at the hands of their abusers.

So what does happen when it’s time to move beyond just surviving? How does one pry the proverbial fungus from the window, to paraphrase Jessica’s own words? In the lecture I attended, Dr. Nakashima Brock offered some suggestions based on resources that have been developed for recovering veterans. Some of these resources exist for domestic violence and sexual assault survivors as well, though their availability and accessibility varies. Therapy and support groups are always recommended. Dr. Brock recommended rituals that explore liminal space (religious or otherwise), art and music therapy, and calming practices such as mindfulness, meditation, and prayer. The emphasis, with any and all of these resources, seems to be on allowing the survivor to claim and tell their own narrative so their pain and trauma can be seen and processed — emotionally, mentally, and physically, as necessary. In her lecture, Dr. Brock also emphasized the fact that grief and healing are not only individual activities; they are often communal. Having a community of supportive, trusted people means that the survivor does not have to deal with their pain and fear alone.

At the end of the series, Jessica Jones had her brutal closure, and a few people who cared about her had her back. We will probably never see her attending art therapy or visiting a meditation center, but the end of the first season did leave open the possibility of her being able to take control of a new narrative through her life and work — one that does not have to be defined by Kilgrave and what he did to her; one that could be written solely by her. I think this can be an important goal for anyone who has experienced great moral injury: to take steps to reclaim your own story and write new chapters with a receding amount of pain, even if you find you aren’t exactly who you were before. 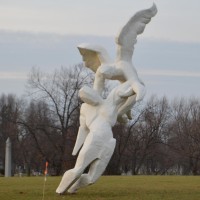 Jessica is a primary care quality guru and divinity student. She lives north of Buffalo with her husband, cat, and chickens, and enjoys local wine, feminist theology, hipsterish music, and hiding from her homework in local coffee shops.