Why Finn is the Best Character in Star Wars: The Force Awakens

This post is full of spoilers. Go see the movie so we can all chat freely, mmkay?

When I first started gushing about Finn on Twitter, it never occurred to me that there had been negative criticism about him. Who could possibly gaze upon his beautiful face and see anything less than perfection? Finn clearly exfoliates with brown sugar and smoothes a homemade shea butter whip over his skin. Praise.

But then someone tweeted me with legit apprehension because of some of the criticism they’d read about Finn. Some critics were calling Finn, among other things, comic relief, a token, and a coward. I don’t make a habit of arguing with people’s opinions, but what you’re not gonna do is flatten this character because he doesn’t fit your narrow expectations.

I watched the Dreamworks movie Home a day or two before watching the new Star Wars, and my first assessment of Finn was to draw parallels between him and Oh. Both represent an entertaining but still touching interpretation of the reluctant hero trope. It was an easy link to make, because Finn was running away from the First Order and the Boov are the best at running away. It took a second viewing (“It’s either Joy or Star Wars again,” my friend said. “You pick.”) for me to really appreciate why Finn’s determination to run away is actually an act of bravery.

In many ways Finn’s character is analogous to Han’s in A New Hope: he is pulled into an adventure he didn’t sign up for and he is eager to get the hell out of dodge as soon as possible. The scene between Finn and Rey in Maz Katana’s castle echoes several earlier scenes between Han and Leia: Han starts to leave, and Leia scolds him and asks him to stay and “do the right thing.”

But who says running away isn’t the right thing to do sometimes? As Finn reminds the rest of the crew, we have no idea what he went through in his years with the First Order. The film makes passing mention of them taking Finn away from his family, programming him since childhood, and ordering that he be reconditioned at the first sign of disobedience. There are some gaps to be filled in, either by licensed books/comics or fan theories, but I’ve read enough about totalitarian regimes and cults to know that shit isn’t a walk in the park.

What kind of mental strength and willpower must Finn have to be raised from birth to do the First Order’s bidding, yet decide not to kill for them in his very first battle? Is it not tremendously courageous to run from the evil that indoctrinated him? Even though Finn had no place to go and no one waiting for him that he knew of, he was set on never submitting to the First Order again. Brother didn’t even name himself. Didn’t take any time for introspection or existential pondering. He was just like “fuck this shit, I’m out.”

This is not a small feat, nor is this offense taken lightly by the First Order. General Hux and Captain Phasma are angered that “one of our own” acted against them. Finn is repeatedly called a traitor, and at least one Stormtrooper seems to take the betrayal quite personally. If Stormtroopers form any kind of kinship bonds, Finn clearly broke them.

But after all that risk and sacrifice, Finn comes back. Not to join the Resistance. Not to blow up Death Star 3.0. He comes back to save his friend from the fate he’s running from. Finn volunteers to go right back into the First Order’s clutches. He gets on Death Star III under the pretense of disabling the shields, then promptly admits “I don’t know shit about shields, man, I’m just here for Rey.” Han is aghast—the whole mission hinges on the shields being lowered—but Finn is adamant. Yes, they’ll save the galaxy, but he’s not leaving without Rey.

This is an incredible demonstration of his loyalty and valour. Finn, a raised-to-be-evil Stormtrooper who was ashamed of who he was, already has an unyielding moral code. Recall that none of those Resistance folks talk about rescuing Rey during their plans. They care about Rey, of course, but in an abstract way. Even as Stronger Better Faster Death Star is collapsing, Poe and the other pilots make no effort to rescue their comrades. Sure, they’re glad to see the Millennium Falcon escaping safely, but if the whole crew had exploded they would simply be more casualties of war. Thank goodness Finn doesn’t subscribe to the belief that “the needs of the many override the needs of the few,” and instead does everything he can to protect his friend from whatever horrors he himself had faced.

S.I. Rosenbaum mentioned how great it is that Finn is simply relieved when he sees that Rey had broken out of Kylo Ren’s restraints, not disappointed that he missed the chance to play the hero. This is an important character trait that he demonstrates throughout the movie. After the TIE fighter crashes on Jakku, Finn looks for and tries to save Poe, even though Finn had supposedly “only needed a pilot.” In his first encounter with Rey, Finn runs to save her from would-be droid thieves, but backs off when he sees she’s okay. When the First Order attacks them, Finn grabs Rey’s hand when he runs. Hell, Finn immediately asks Rey if she is okay, even though he is the one who gets knocked out. And in my absolute favorite scene, Finn and Rey enthusiastically congratulate each other on kicking ass with the Millennium Falcon. There is no posturing or bravado, no bickering over whose fault it is that they are being hunted by the First Order — just joy and mutual admiration.

Most of these moments get laughs in the theatre, but the pattern is established: Finn wants his friends to be safe, even when he’s just met them. Finn’s friendships become the emotional core of the film. In fact, while I don’t diss anyone’s ships, I find it hilarious that Finn can be shipped with anyone and everyone, mostly because he genuinely cares about people.

To reduce all of that to “comic relief” and “sidekick” grossly misses the point. Yes, Finn is funny, but The Force Awakens is a funny movie! Boyega had great lines and excellent chemistry with the whole cast. The banter between Finn and Han was especially wonderful. At no point was Finn the gag or the butt of the joke. In a trio of heroes (though, given his limited screen time, does Poe really count?), Finn is also not relegated to a minor role. While Rey is filling the Force-sensitive Chosen One role, Finn is given a complete character arc in this film and is key to the progression of the plot. Sure, Finn was just a sanitation worker. But Rey was just a scavenger, Luke was just a farmer, and Anakin was just a slave. Person of Humble Origins Rises to Greatness is one of the oldest tropes in the world. Rather than detracting from Finn’s awesomeness, his lowly beginnings may hint at unparalleled greatness in the future. After all, that lowly janitor blasts ships out of the sky after getting only a 30-second tutorial on how to work the cannons from Poe Dameron. And he was pretty fucking handy with a lightsaber.

I wonder if the idea that “Finn isn’t a cool enough hero” is tied to perceptions of masculinity. A Washington Post critic was disappointed that Finn got “friend-zoned” by Rey, probably because he doesn’t “exude sex appeal” the way Lando Calrissian did. (Me, myself, personally, I wouldn’t tie the worth of a black man to his sexual prowess, but you do you.) Another critic cited the fact that Finn is knocked out during the climactic fight between Kylo Ren and Rey as evidence that he wasn’t really important. But that happens after Finn lands several good hits on the Sith and holds him off while Rey recovers. It would make no sense for Finn to have the final fight with Kylo Ren; Kylo is very obviously Rey’s enemy and it had to be her who faced him. Rey even has a vision predicting it, just like the vision Luke had about facing Darth Vader in The Empire Strikes Back. Rey getting a moment to shine in no way detracts from Finn’s heroics.

I understand the heightened scrutiny underrepresented groups get when it comes to media portrayals. With so few images of “us” out there, it’s important the few that do exist do not play to stereotypes. The aim is to have a vast assortment of characters that portray the full array of the human experience. Finn is a step in that direction. In conclusion: He is the most compelling character in Star Wars Episode VII: The Force Awakens. COME AT ME.

In this article we originally referred to the writer of the Washington Post review as a “white lady.” Lonnae O’Neal is Black and we apologize for the mistake. 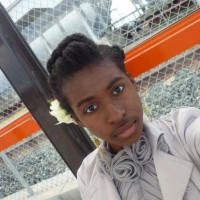