The Customer is Not Always Right: Microaggressions in the Service Industry

Every person of color has heard this question. If you also happen to be a woman, and, say, have your nose pierced, you’ve unwittingly guaranteed yourself a stream of questions about your cultural background. Whether you’ve ever worn a sari or not is apparently considered a suitable question. Throw in the occasional “Your English is really good!” and you might have to fight every snarky urge in yourself to respond, “So is yours.”

Working in the service industry, I was involuntarily subjected to this uncomfortable and often intrusive examination of my history on a regular basis. It’s as if I had tacitly agreed to become an object of scrutiny — on display — due to my job and my background, and every inch, every aspect of my life was fair game for questioners. In a context in which responding in kind to a rude question is never an option, I felt trapped by the need to maintain a professional demeanor, even if I would prefer to be flippant. You know how “the customer is always right”? That phrase takes on a whole new meaning when you get inappropriate questions about your racial and ethnic background in your place of employment.

When people assume the role of customers, they often feel entitled – they take liberties, developing additional expectations of those whose job it is to serve them. They presume their servers will always be polite, attentive, and friendly — and that doesn’t even include the disproportionate expectations of charm and submissiveness when you’re a woman. For those in the service industry, a clear power dynamic exists — you’re put in a socially and professionally vulnerable position that leaves you without an obvious exit strategy. As someone whose sole purpose in a service environment is to cater to other people’s requests, you can start to feel small and somewhat dispensable. From the treatment I received daily as a server, I was reminded of the inherent inferiority accorded to my position. The economic compensation for a server doesn’t provide any amelioration for dealing with offense or intrusive questions or basic incivility. The only real incentive is a disincentive: the high likelihood that you’ll be fired if you challenge a customer’s rudeness.

When given the third degree by a customer, I would usually grimace to myself and try to think of any excuse to leave that table. Walking away, I would replay the exchange in my head to make sure it happened as I remember. Did he really ask me that? And is that really how I really responded? I felt caught off-guard, confused, and conflicted all in the same moment. And afterwards, those feelings would turn to anger, because I wasn’t on a level playing field with customers who questioned me; I was seen as beneath them, by default. Eventually, my anger would turn to regret, because I didn’t defend myself.

I’m very attached to my culture and ethnicity: speaking Urdu so other people can’t eavesdrop, ranting about the politics in Pakistan, pretending like I can cook desi food because it’s my favorite. It’s when people start defining and confining based on their own assumptions about me that I am denied the possibility of determining my own identity.

The entitlement of customers often allowed them to easily vocalize stereotypical perceptions they could use to slot me neatly into their worldview. When I informed a customer who asked that I’m from Minneapolis, it would generally prompt a follow-up: “Where are you really from, originally?” Which, as we all know, roughly translates to: “Then why aren’t you white?” If I then assured them, with great restraint, that my nationality is in fact 100% American, I was often subjected to further questions about my ethnicity, beliefs, and cultural practices.

I have also experienced the upside of the service industry: genuinely pleasant human interactions with customers, the establishment of friendships, the unsolicited but surprisingly helpful professional advice, and even the occasional intelligent and witty mind that intrigued me more than I might care to admit. But all throughout my time working in a restaurant, I was conscious of being in a position that left me constantly exposed to all sorts of remarks — as a woman and a person of color — whether they were complimentary or offensive. I began to wonder whether this was simply what I signed up for. Had I agreed to routine public interrogation when I took the job?

Working in the service industry, I was so often reduced to a single idea that some stranger had about me. I was identified, pinpointed, as a brown South Asian woman, which in itself holds a number of associations for people. I could be misconstrued as the passive and docile South Asian woman with limited agency, a socially constructed image reflective of a colonial past. I could be viewed as someone entirely bound by tradition, a victim of oppressive religious and cultural practices and at the mercy of patriarchal dominance. I could be fetishized as the “exotic” foreign woman, the object of an Orientalist mentality. I could be all of those things, but not a struggling writer, a soccer player, a die-hard Manchester United fan, a very-in-debt Master’s student, an aspiring intelligence analyst, a feminist, a disillusioned diasporic. To some people, I couldn’t even be an American, because I am Muslim and brown.

I shared these frustrations with my friends and fellow servers, people I was sure would understand me. I tried to explain to them why these interactions bothered me so much. According to many of them, I should be more forgiving of people’s ignorance. They (i.e., white Americans) haven’t been “educated” about ethnic minorities and their histories, and are therefore not conscious of how they should react or behave. It’s my responsibility to teach them, because they are, at the core, well-intentioned.

The wisdom of this supposed “teaching moment” eluded me. Was I supposed to have incorporated the additional task of enlightening the ignorant into my job description? And if ignorance was really the issue, why was I the one responsible for providing this education to customers? If not mine, whose responsibility was it?

The expectation that my purpose was not, very simply, to think and be what I want, but to devote time and effort into justifying why it’s acceptable for me to do so, was an exhausting thought to contend with. “Educating” white people who would violate my privacy and dignity while I attempt to serve them coffee seemed to be a task far beyond the scope of a menial worker, and it was also something no one had the right to expect or demand from me. I did not have the time or energy or responsibility to educate the ignorant and the insensitive, one customer at a time.

That left no other option than to insulate myself from these daily indignities, to accept that I had no control over other people’s idle curiosities, and to understand that this was where I could and must remain disengaged. If someone demanded to know my ethnic lineage in order to initiate contact, I might be tempted to respond rudely or correct their mistaken assumptions, but I wouldn’t. I also wouldn’t take the risk of refusing to answer outright, because that might be reflected in my tip. I decided to simply and clearly answer, “Yes, I am American” and “Yes, I really am from Minneapolis,” and if they insisted I would even clarify that my parents are Pakistani. After struggling for a time to bear it, I decided to let go the burden of accepting or accommodating my customers’ perceptions of me, or falling in line to “educate” them. You know why? As a server, I was not paid to think. 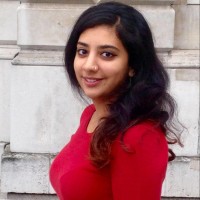 Saher Naumaan worked as a server, barista, and bartender in Washington, DC. She is currently an MA Candidate in the War Studies Department at King's College London.