It never really hurts, except when you allow yourself to imagine: what if things had turned out differently? How would it have been if she’d lived, if she’d been lucky? You would have had a mother, which is to say that you’d be a different person entirely. You would be someone who could believe in the notion of luck as something within your reach; of yourself as a person who might be lucky, or blessed, or even just normal.

The normalcy is the thing that is robbed from you. You grow up feeling as though you wear your motherlessness on your skin; as though any stranger could pick it out at twenty paces. There’s something odd, maybe a little bit suspect, about a girl without a mother. Growing up as that girl is tough; you feel your hard luck every day of your life. You feel it in your heart, and in your lungs. You feel it as a heavy stone around your neck. You develop a frantic self-consciousness, underpinned by the fact of your motherlessness, which sets you unmistakably apart from the crowd. While other teenagers might feel like freaks, you know you are.

You glean bits and pieces from magazines, from television, from your friends and their mothers. How to be a woman; how to act around other women. Still, femininity seems somehow off limits to you, as though you were an imposter, not properly initiated. Your aunt sends makeup, nice underwear, and you are relieved: these are the real things, from someone who knows. You can never be sure of yourself. The thought of having your own daughter one day terrifies you: you are, quite certainly, not qualified for the job.

You grow up thinking of your mother as a saint, because that’s how everyone talks about her. You are in your twenties before it occurs to you that there must have been some bad things about her. Even the thought is foreign; it stretches the boundaries of what you can know. Instead of a flesh-and-blood woman, there is only this faint sense of perfection, departed. Kind and good-humoured until the end, and stoic in suffering. Et cetera. Sometimes you wonder how you could ever, ever live up to this, and you find yourself angry with your mother – angry with your dead mother! – tears pricking at your eyes. I think you must be very angry with her, says your therapist, and you cry all the way home from your appointment because someone has finally given you permission.

On the radio comes a question from a teenage girl about how she can keep a relationship with her mother who has died. This is the thing, you realize: you want a relationship. Not a one-sided flood of missing and wanting, of love and anger. Not this endless hammering against a locked door. But it’s impossible, isn’t it, trying to have a relationship with a memory, and such an incomplete one at that. You feel her absence so sharply sometimes, when you try to check yourself against someone who is gone. And yet: there are moments when she seems less than gone after all. You have her old watch repaired and start wearing it, and when you catch a glimpse of your wrist one day you feel a jolt of recognition, your brain lighting up with a memory you didn’t know was there. You sniff an old bottle of her perfume – this is surely Tragic Behaviour, but you can’t help yourself – and the sense of her is so sudden and immediate that you have to lean against the doorframe. You are so keenly aware, in these snatched moments, of her tantalizing almost-presence. Just on the other side of that curtain. It is as though you might be able to reach her, for a fraction of a second, if you cobbled together enough of the spare parts of her life.

You decide to get a tattoo on your arm: Athena, the Greek goddess. You’ve felt her as your alter ego since childhood. Why? your friends ask. You shrug, wondering how much to tell them, how far to go. Her motherlessness is the real reason, of course, but for now you just tell them that she is the goddess of wisdom. And of war.

As you get older, your peers also start to lose parents, here and there. At university, an acquaintance’s mother dies rapidly of a brain tumor; a few years later, a close friend’s father dies very suddenly. Which is to say: it is less strange, now, to have only one parent. You are less of an anomaly. No longer the girl with the dead mother, who was before that the girl with the sick mother. (She’d had cancer since you were three, which made it hard for you to believe that she had ever been healthy; had ever had a body like other mothers’ bodies.) But there is still a kind of verbal fudging, a reluctance to let other people find out during the course of casual conversation. “My mom.” Present or past tense? Past is honest, but invites questions: When did she die? I was eleven. Do you have siblings? No. So it’s just you and your dad then? Yes. Where does the rest of your family live? Far away.

The opposite is true on those rare occasions when you encounter other women who have lost their mothers. Girls like you, who have to walk through the world dodging every mention of mothers and daughters, who don’t know how to answer questions about “your parents.” A strange, sad club to be in. But how to describe it, that electric realization that floods though you when you find another one: she’s like me. The relief at not needing to be furtive, not needing to (eventually) have The Conversation, when the other person will tilt their head at you and sigh. When they will say, I’m so sorry. And you will shrug and look away, not knowing what to say, or how to meet their eyes.

There is a home video, made when you were about nine. You watch your nine-year-old self lead your aunt (behind the camera) off into the house, blithely walking past your mother as she sits on the couch. Stop, you want to tell the girl onscreen. Reach out and touch her!

Your aunt, a deeply spiritual person, suggests that you try to contact your mother through a medium. You think about it for weeks, look up mediums online, but eventually decide not to go. You believe in the afterlife – or at least, you believe it could be possible – but you have trouble making that the way you think about your mother. Besides, it seems sort of a cop-out: dead but not really! Her death is the thing, the dark kernel at the center of your life as you know it, as you have to live it. You have to go through it and not around it. You tell yourself this, but then you see pictures of a classmate’s wedding on Facebook and it strikes you that your mother will not be at your wedding, and she will not be there when you have your first baby; your whole life, in fact, will be day after day of her not being there, and it feels so impossibly unfair. To have ever had a mother at all: that seems like the mythical thing now, to think that you once held her hand and sat in the car with her and watched TV with her in the same room. It’s wild to you, literally incredible. You have trouble making yourself believe in it.

Then there are the older women, the replacement-mothers. You find yourself forming oddly intense attachments to them, throughout the years. But although they are kind and the illusion can be sustained for a moment, it’s cheap somehow, less than real. All these would-be mothers put together don’t add up to the real thing. Even so, you can’t help loving them in an embarrassingly fierce way; you hope they’ll find out about your mother’s death and fit the puzzle pieces together, but you also hope they won’t. Because then they would know that you embody something shameful: a person left wanting, a person who lacks. A person to be pitied.

The pity is what you fear and hate most of all. It’s a paradox: the deep grief you feel at your mother’s death, paired with the utter horror of having others reflect it back to you in their reaction. You know it isn’t personal – you know you must learn, in time, to accept sympathy with grace – but still you can’t think of anything worse. You don’t want other people to feel sorry for you, even if it’s justifiable. You don’t want them to undermine your courage, you who have been a goddess of war ever since you were a little girl. You want to wear your luck, your lot in life, with a kind of dignity: it’s hard, but also yours. 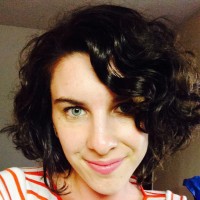