Hope for the Stricken: The Penzeys Spices Catalog

Losing sleep over Trump’s fascist fever dream? Horrified by endless mass shootings, police-sanctioned murder, heartless denial of basic human kindness to refugees? You might be a member of a new social group I call the Stricken. Welcome to our club—it sucks here. We’d offer you a cup of coffee, but for the last ten minutes we’ve been clutching the empty pot while the water runs and we stare dejectedly out the window.

When you’ve written to your representative and carved some money from the grocery budget for UNICEF, but your heart still feels like one big bruise, where’s a soul to turn for respite? I would like to share an unlikely source of peace and hope with you.

No, it is not a religion. Well, not yet. It is the Penzeys Spices catalog.

Perhaps you received a box of Penzeys Spices as a wedding gift nine years ago, and your name was added like an indelible seal to their mailing list, so that despite three moves, one to Canada, the catalog miraculously arrives without fail. Wait—have you been throwing it away? Fish it out, you beautiful fool!

Besides detailed descriptions of spices by the ounce available for order, the Penzeys catalog includes articles on regular people and their family recipes. And by “regular” people, I mean an actual representative sample of the diverse array of humans living in the Midwest and beyond.

In “Celebrating the 50th Anniversary of the Voting Rights Act,” community college history teacher Jade Roberts recounts her father’s own Great Migration story. “The Compassion of Irish-Born Cooks” showcases Irish artist Joe Caslin’s arresting murals of same-sex couples on the sides of rural castles—and also his recipe for beef stew. “Cinco de Mayo” really crushes it with Mexican-American seamstress Sara Ocampo, who discusses the wedding dresses she can sew in about a week.

Just to be clear, I am still talking about a catalog that sells spices.

The home cooks who submit their recipes to Penzeys don’t do it just to show off (or, in the case of taco popcorn, surprise those of us who had assumed popcorn could not taste like tacos). They want their signature dishes archived somehow in humanity’s big book, and they want the stories behind the recipes preserved too. Drew Doll’s chili recipe came down from his grandfather and father, both firemen who could be counted on to cook it for their firehouse crew. Leo Bassetto makes his apple pie with apples from his own backyard. Isn’t it wonderful to think of him out there picking them in the late September gloaming?

But maybe people just aren’t your jam. That’s understandable, given how terrible many of the ones on TV seem to be. Instead, let’s talk actual jam—bacon jam. This mixture of fried pork, onions, brown sugar, and maple syrup is simmered for a few hours, then pulsed in a food processor until it is the consistency of everything you’ve ever dreamed of. And then you spread it—do you hear what I am telling you?!—you spread it on bread and eat it until it is gone. Bacon jam is like an American version of a Tibetan Buddhist sand mandala, a lovingly crafted representation of the gods that is designed to be washed away—in this case down your own gaping maw. We can meditate on the transitory nature of material life as we chew.

Do I actually cook these foods? What an irrelevant question! It is the words of the recipes themselves, the alchemy promised by the proper ratio of bouquet garni to fresh-ground tellicherry peppercorn. Just knowing they exist is enough to buoy me most days. When the time is right, I will be able to make them in my own humble kitchen.

Because this isn’t Real Simple or Martha Stewart, focus-grouping dishes on an algorithm created from women’s online shopping histories. (People who buy Hunter rain boots really like “garlicky kale,” apparently.) Everything about the Penzeys catalog feels homemade, from the recipes themselves to the many photographs of bowls full of mushy brownish things. There are no food stylists on hand at Penzeys, no curation of a Pinterest-page existence, no ad agency’s guess at what diversity looks like. In the family snapshots, people who look all different ways clutch each other with genuine love, wearing nurse’s scrubs or Lee jeans or unironic glasses. The holiday edition is full of recipes for cookies, and about the “reason for the season” some people mention Jesus and others say something like, “Jesus seems nice but I am more concerned about climate change” and those two points of view co-exist on a two-page spread without causing the catalog to spontaneously combust.

The thing about life in 2016 is that sorrow feels inescapable. The sorrow is not new, of course, but the inescapability is. After the San Bernardino shooting, in the throes of helplessness, I signed up with Everytown, the group advocating sensible gun laws. Now I get texts from them about the woeful state of affairs in Congress. Most of them begin with a shout—“BREAKING NEWS!”—but instead of whimpering, I simply throw my phone down the heating vent and turn to the pages of Penzeys. There I find a picture of a family eating dinner and leap inside the image just like Mary Poppins and the kids jump into Burt’s chalk drawing. I pull up a chair. Someone brings me a plate. And of course though we don’t set out to talk politics, a few things come up anyway—it’s inescapable when reasonable people with hearts of kindness get together. We wonder, is it more effective to focus on the alderman’s race and saving the dunes at the end of the block than trying to overcome the effect of the Koch brothers of national races? And even though Uncle Jed is a Republican, he is the Teddy Roosevelt kind and we all agree on the importance of cordial debate and sensible policy. Then Grandma says cheerfully, “well, we won’t solve it tonight!” and we eat hot fudge sundaes.

Have you just come from that community meeting on replacing all the public schools with charter schools and all the current charter schools with preemptive detention centers for shifty-looking preschoolers? I know it’s tempting to eat the entire wilted poinsettia sitting in your cubicle and wait for sweet oblivion, but give me five minutes. May I interest you in a tracing of a small child’s hand, colored in to look like a turkey and submitted for publication by one “Aniella,” a child of indeterminate age? How about six different kinds of ginger? Or a recipe for chocolate syrup shared by Mary Ellen Wooderson, a farmer’s wife from northern Oklahoma? She has ten grandchildren and four great-grandchildren, with “one on the way.” Welcome to the world, tiny person I don’t know. Please make sure Penzeys prints your birth announcement. I and the rest of the Stricken desperately need to see it.

We’re doing what we can, sort of. I mean, probably not enough, but we are so seriously bummed. We are also hungry. And here is a slim volume representing the best of humanity—family, love, bravery, sacrifice, common sense, and food—to talk us down from the ledge. To wit: the other night I read the catalog’s description of Grey Sea Salt “from France” to my husband while lying in bed, then fell into the kind blissful sleep that used to be possible before the invention of the Internet. “Back by popular demand,” it reads. “We discontinued this one for a while, but it made people sad. We don’t want to make people sad; we want them to be happy.” 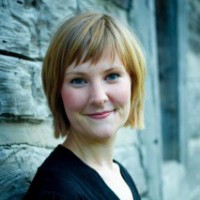 Kelly O'Connor McNees is an author and editor who lives in Chicago.