“No cis men.” “Everyone but cis men allowed.” “Women and trans only.” If you’ve gone to queer dances, play parties, or readings you’ve likely seen these stipulations or something similar and might have thought, “Oh, good!” And, for quite some time I also was happy to avoid a population that so often attacks and dehumanizes trans women like me. I assumed that not having cis men in a space would create safety, and encourage my fellow non-cis men to accept trans women and form a community around our shared non-cis-man-ness. But this definitely never happened, and instead I noticed many unfortunate results of this identity-policing stand on party entry. Very little of it made me feel safe.

I started thinking about this some time ago when I was invited to a queer kink event. This event had their rules posted to their online invite, and “everyone but cis men,” was right next to rules of consent and about allowed photography. My stomach lurched when I read this rule, and despite not being as a cis man in the least, I began to wonder why this was so. The more I thought about why I was feeling odd about it, the more I realized the myriad of issues with this assumed gender presentation and assignment clause was bringing up for me. I decided not to attend this event, and spent the weeks since thinking through some of the rather unfortunate consequences this type of limitation can create.

For starters, and this should be obvious, not everyone that appears to a party door person as a cis man is a cis man. Many of my fellow trans women are often erased and hurt by the assumption that — perhaps because of the choices they’ve made about their body, their inability to use HRT, or their lack of access to surgery due to gatekeeping or finances — they are actually men. The rule to not allow cis men often means we trans women are required to pass a cis lady gaze test, presenting our gender in a way that is “woman” enough for the door folks. The idea that anyone besides ourselves can judge our gender is a painful falsehood. And if we dare to be butch or choose not to take hormones, we are likely to be barred or policed in a very uncomfortable manner from events that purport to be safer spaces for women like us.

It’s also clear that nearly everyone who is a trans woman was once seen as a cis man, and many of us were only able to figure out our gender, or learn how to transition, by being able to access spaces that showed us we could be trans; we could be women. Turning away someone who might be desperate to be allowed to be with other women, other queers, or other femmes due to their current presentation or identity falsely presumes that gender and sexuality are static, and not a spectrum or movement.

The rule of “no cis men” also places an odd onus on any trans men who are theoretically allowed into these spaces to either appear visibly trans, or find some other secret-handshake of “I’m a trans guy” in order to access these spaces. This too can be alienating or scary, as dealing with gender police at the door to a supposedly fun event isn’t good for anyone’s evening. Not to mention that a trans man shouldn’t be concerned with whether or not he appears cis in order to remain part of a community that pays lip service to trans men. What may be an act of safety or comfort in the cis or heterosexual world can then prove to be a limiting factor, and create a strange dichotomy between having trans community, accessing work, and experiencing daily safety.

A trans guy friend of mine recently related a story of being policed at a space for queer and/or trans folks. At the door he was IDed, and because his license read “male” and reflected his chosen name, the door person hassled him, then eventually security removed him — because, “obviously, you’re not a trans guy.” His protests of “I’m trans. Why would I make that up?” were to no avail, and his friends followed him to a bar nearby that didn’t presume to know or care about his body or identity. In this case, as in many others, there is really no comfortable way for him to prove his identity or history, nor should there be reason to. If we find ourselves in a place where only a blood test, our medical history, or genitals is the key to access a space, then we’ve created a space that favors the normatively attractive or cis among us.

Queerness itself isn’t always visible in the same ways from person to person, and can’t be dependably seen by any of us. What does queer look like? Is it a dress code? Is it a body? Is it a combination of personal feelings, and actions? Who has the right to say whether or not someone else is queer? Any rule that sets a person or persons up to judge another’s suitability to attend an event based on their perception is rife for abuse. Ultimately, these rules and exclusions don’t actually guarantee queerness, but instead allow for only acceptable types of relationships and people that may even self-identify as straight, but are still allowed in due to a presumption of queer bodies or identities. The supposition that you can know if anyone is queer or not also ends up targeting trans women and those folks who are femme, or otherwise present such that they “look straight,” protecting a narrow range of what is considered queerness.

Additionally, if the rules are meant to remove “those having penises” from these spaces, then the copious strap-ons and trans guys in a room are proof that this is also an ineffective policy. The idea that certain genitalia are more at fault for patriarchy or violence is a dangerous one that perpetuates more cissexism than safety. It also harms trans women, regardless of how we ideate or use our bodies, and it creates an exclusion that we may feel targeted by even if the sign says “trans women are welcome.” The idea that “penises” should be excluded also hearkens back to gross second-wave feminist ideas that all violence is male violence. While violence may be statistically higher in “men,” it isn’t necessarily limited to cis men, and may implicate masculinity more than assigned gender. The belief that queer relationship violence, or lesbian- or woman-perpetuated violence, doesn’t exist or is incredibly rare is the kind of gaslighting that can keep a partner or girlfriend of an abuser from seeking help or escaping a dangerous or abusive relationship. We can only truly limit abuse in spaces by watching for abusive behavior and having zero tolerance for it, without an eye towards how the person enacting it may appear or present to others.

I’ve also heard from many queer women or non-binary folks who were unable to bring their queer partner who appeared to the organizers as a “cis man” into a given space. This was often true despite the fact that their partner is a femme person, trans woman, or otherwise doesn’t identify as a cis man. Not only does this make these folks feel less interested in attending, it also unfairly punishes them for choosing partners that don’t adhere to whatever narrow belief of what “woman” or “trans” means might be held by the organizers. We shouldn’t punish each other for choices of partners, or police each other based on what we think queerness or transness must look like. This is likely to bar some great people from our spaces, while keeping a value of sameness and conservatism in appearance, attitude, and expression at the forefront of our groups.

There is much more to be said about the perpetuation of the allowable queerness in spaces being a tool of white supremacy as well, but that criticism deserves its own article, and for now I will just say that it’s no wonder so many queer spaces are very, very white, and leave it at that. We should know better, and learn how to stop hurting those we claim to protect.

In order to move forward in our organizing and access to our events, we first must honestly look at what and who we are interested in having in our space. What are the behaviors we want to encourage or discourage? Are we trying to create a space for people who are often marginalized to feel safer exploring their sexuality, or meeting others they might be interested in dating or befriending? How does any rule around identity limit or aid these goals? Are we actually punching up when we try to make these spaces, or are we creating new ways of attacking some of the same people often targeted by the patriarchal or heterosexual mainstream we declaim?

These are hard questions, but without asking them we risk reifying the same awful identity politics and policing of the past 40+ years of queer society, which have not gotten us to a better place for the most marginalized. The answers to these questions will likely reveal a lot about the prejudices we hold, some against our outwardly spoken politics, and the fears we have about certain bodies, identities, or persons in or around our spaces. The assumptions and fears that we have are often based less on reality, and more on bogeymen we’ve created through years of oppressive dialogue and writing.

In my exploration of this issue, I’ve found that the reasons for the rules like the one discussed above are usually explained as a way to create a safer space, and block abusers or creepers from these spaces. But by hinging this on perceived cis men, these rules pretend that individuals who aren’t cis men can never be abusers, that only they can perpetuate patriarchal abuse. This is disastrously untrue. I would suggest instead that if the actual goal is to limit abuse and trouble, those behaviors should be targeted instead, and people removed for words or actions which make other people feel unsafe.

Much better than attempting to judge who other people are is to simply stipulate that attendees identify as queer, or a woman, or femme (depending on your goal), and assume they know better than you who they are. We must remove ourselves as the judge of someone else’s gender, presentation, or sexuality and accept that they will seek out and go to spaces which match who they are. And, frankly, even if a small number of attendees are lying about their identity, these few folks will be held to the same standards of behavior as the rest of the attendees, and may ultimately learn more about how to move differently in the world. If we create spaces like this, open and accountable spaces where everyone is held to the same code of conduct, consent, or speech — which ought to hinge on what they do, and not who they appear to be — then we will actually be creating the kinds of safe spaces we want and deserve. 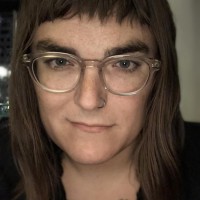 Brook is a queer trans woman living in Portland who hangs out with her cat, and does all manner of technical magic for a software company. She travels as often as possible, and can often be found on her couch, reading and enjoying a cider.