On Painted Hands and Soccer Pitches

I looked down at my hands and wished I could hide them. How had they even noticed? The intricate details of once-dark red henna paisleys and rounded shapes that traced my fingers were fading — only a few lines of odd and uneven colouring remained.

A few of my teammates nearby laughed nervously, awkwardly. I didn’t dare look at them. I wouldn’t let them see my hurt. Our coach yelled and waved us over; the match was about to begin. I ignored the hollow pit of anger in my stomach and completed the rest of the warmup.

“Shireen, your turn!” my friend Farrah called. I had been waiting patiently for over two hours for my chance to have henna applied on my hands. Farrah got up and straightened her beautiful blue organza and satin shirt glimmering with gold-coloured threads. “Can you help me?” she asked.

“Don’t smudge it!” I reminded her.

She stepped away, holding her hands way above her head, and moved on to the next station, where an aunty was dabbing lemon and sugar water onto the hands and forearms of young girls.

Mehndi (also known as ‘henna’) is from a small plant called lawsonia inermis, found in Iran, India, Pakistan, Egypt, and North Africa. This naturally occurring dye found in the shrub binds with the keratin in skin and hair, creating a mahogany- coloured stain. Women from many cultures use henna to adorn themselves for weddings, parties, cultural and religious celebrations. It is considered essential for a bride. In South Asian folklore, the darker the dye on a bride, the more her future husband is said to adore her in married life.

In our tight-knit community, this women’s party (aptly called ‘Mehndi’) was for feeding the bride-to-be sweets, wishing her well in songs, and engulfing her in love before her wedding. Some of the more festive ladies were already dancing in a corner; some women were gossipping, while others were pretending not to eavesdrop. I plunked myself down beside Ayesha, the most talented mehndi artist I knew. She had finished the bride’s hands and feet, as well as those of a slew of other girls, and I knew it was exhausting work. I hoped she wouldn’t decide she was tired and quit.

Ayesha took out a henna cone and pushed the mehndi to the top, the way that people push toothpaste to the end of the tube. “What design do you want?” she asked.

“Anything, I’m not picky,” I answered. I could barely draw a decent daisy, and eagerly deferred to her talents. She smiled and went ahead.

Out of the cone came a thin line of a dark khaki-green-coloured paste. Ayesha maneuvered the cone with agility and expertise. It reminded me of someone doing tricks with a soccer ball. I inhaled deeply — I loved that rich earthy scent.

I looked around the room, a space bursting with colours on silk tunics, filled with the scents of tempting dishes and the sounds of playful aunties beating on a dhol and singing traditional wedding songs off-key. I closed my eyes as Ayesha very skillfully wove up and down my hand, creating a design tailored for me. The mehndi would harden and after I brushed it off my hand, it would reveal beautiful flowers coupled with generous swirls and tiny dots where one pattern met another. It would last two weeks if I was lucky.

Farrah came towards me, trying to balance two small glass bowls of kheer with lots of pistachios — my favourite dessert — as Ayesha was putting the finishing touches on my hands. “Let me feed you,” Farrah said. Her mehndi had hardened a little, so she could give me delicate spoonfuls of the deliciously creamy rice pudding without ruining the designs.

Ayesha’s curly hair fell around her as she finished the finals details. She was a perfectionist. We chatted about what we would wear for the wedding and what our hairstyles might be. I had never considered myself to be very girly, but I indulged. I think mehndi is one of the most wondrous symbols of beauty and femininity — it looks good on everyone. I was quite happy with my tomboyishness but now it was softened by my beautiful hands, in a way I didn’t mind.

“There!” Ayesha said. She got up and stretched. My hands were stunning. I grinned at her and almost threw my arms around her in appreciation. “DON’T RUIN IT!” she scolded with a smile.

My mom came over to examine my hands and showered Ayesha with a slew of compliments. “Your mehndi colour will come out really dark,” she whispered to me, her dark eyes shining. “I used the leftovers from the bride’s menhdi cone on you.”

I sprinted down the sideline with the ball, an attacking midfielder and a defensewoman coming close behind me. Shawna called to me from the top of the 18-yard box. I looked up and passed to her. It took less than three seconds for her to strike and score.

I was the first one over to her, but stopped as she extended her hand to high-five me. I patted her on the back instead. Confusion flickered across her face, but she was distracted as our teammates piled on her in celebration. I clapped so my palms — with the offending stains — were not visible, even as I shared in my team’s jubilation. At half-time I sat on my hands, then pretended to be digging through my bag, looking for something. I took a second to glance down at my hands. The faint traces of spiral patterns were still noticeable.

Later, when the final whistle blew, we ran to our goalkeeper to congratulate her and walk back to center as a squad. My hands were clenched nervously. I had a frozen smile on my face. Our sullen opponents trudged over, and one of the opposing forwards peered over my shoulder and said loudly, “Hey, what’s on your hands?” The duo who had taunted me earlier whipped around to squeal, “Shi-reen’s hands are gross! Maybe she’s contagious!”

I tried to brush it off with as much dignity as my twelve-year-old self could muster, rolling my eyes in exaggerated fashion. But the other team was within hearing distance, and as they came closer they took out their frustration with defeat on me. Instead of receiving a sportsmanlike greeting, I got 15 elbows smacked into the palm of my extended hand. They clustered together after the team handshakes, pointing at me and whispering while my teammates just watched. I knew I would not see guilt or solidarity in their eyes.

I jogged back to the team bench to get my jacket so I could pull the sleeves down and hide my hands — a luxury I hadn’t had for 90 minutes in my short-sleeved uniform. “Shireen, are you sick or something?” a girl with a blond ponytail asked in a hushed whisper.

“Maybe she isn’t feeling well,” one of the wretched duo piped in.

I would not let the hot tears that were stinging my eyes fall. I gathered every ounce of mental strength, gritted my teeth, and packed up my things as fast as I could. “Bye, Coach!” I yelled as I ran off, glimpsing our station wagon in the parking lot. Shawna, my carpooling buddy, followed closely behind. When Dad asked how it went, Shawna gave him a very polite reply. A Rick Astley song played in the stiff air as I stared straight ahead.

When we arrived home, I bolted up the steps to the kitchen. I didn’t take off my cleats; I tracked mud onto the vinyl tiles, knowing Mom would be upset. I flung open the cabinet under the sink, ripped open a box of S.O.S. pads, and turned the water on. I started scrubbing away the remaining mehndi. I wasn’t sure if it would work, but I had to try. The steel wool hurt my hands and the hot water burned. I scrubbed and scrubbed as my tears fell. I let them. I didn’t care anymore.

The mehndi that I loved so much had no place on that pitch. A place I loved, where I had always felt equal to my peers. I choked on my sobs over the kitchen sink for a little while — until there was no more blue left in the steely threads of the pad, until my mehndi had been completely scrubbed off and my hands were raw and numb.

Then, finally, I dried my tears and took off my cleats. When I walked by our dinner table, I saw that my mom had left me bowl of kheer. She never said anything about the mud.

Recently, while doing research for a piece on women’s football in Europe, I came across a gorgeous photograph of France’s superstar midfielder, Louisa Necib. Necib, one of my favourite players, sits on the bench, getting ready for a training session with the women’s national team. Her hair is in a practical style, and she is pulling up her socks and adjusting her shin guards. Completely normal. Except for one tiny detail that caught my eye: her hands were decorated with henna.

It was the first time I could remember seeing a professional athlete with painted hands. It took my breath away. In the image, Necib is poised, strong, beautiful, and unapologetic. She belongs there: both her skilled feet and her painted hands.

I thought of the young athlete I’d been and wished I could have seen something similar when I was still a child. Maybe then I would have understood that coupling your culture and your sport, two things you love, is not only normal — it can be wondrous. 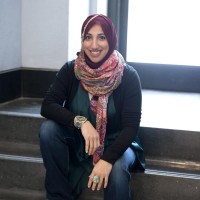 Shireen Ahmed is a sports activist and a freelance writer who focuses on Muslim women and the intersections of racism and misogyny in sports. When she isn't watching soccer, she drinks coffee as tool of resistance.