The Case of Thomas/Thomasine Hall: Intersex and Genderfluid Identity in the Colonial Period

This post is sponsored by Laura “Laura47” Boylan, with our great thanks.

In 1629, a servant in colonial Virginia came to the local court’s notice for allegedly fornicating with a fellow servant. Although the initial charge was fornication, things rapidly got more complicated as the authorities realized they had no idea whether Thomas – or Thomasine – Hall was male or female, and witness accounts conflicted. They called for an examination by several women, who agreed that Hall was female; later, a group of men examining Hall came to the opposite conclusion.

By now, fornication was the least of the town’s worries. They demanded an answer from Hall, who refused, replying that “he was bothe only hee had not the use of the man’s parte.” Eventually, Hall explained that they had been raised female, but their body and gender had both been ambiguous from youth. They had dressed as a man to join the Navy, a woman to live with their aunt and learn sewing, and a man as a servant in Virginia…sometimes.

Despite a maddening lack of full information – a fire during the Civil War destroyed many of the case details – this account is near and dear to my heart, since my gender and sex are very similar to Hall’s. Much like colonial Virginian society, twenty-first century Americans have the tendency to continually ask: but which are you, really? There is a continual assumption that genderfluid is merely a phase of coming out as trans, or the same maddening nonsense that bisexuals get all the time – you’re doing this to get attention, to be contrary, to rock the boat for its own sake, etc.

What’s most frustrating about this status really is that premise: if one is genderfluid, it must be by some sort of choice. Our understanding of gender is that bodies come in male or female, and minds tend to be more fluid. That, on some level, nonbinary identity is a sort of “special snowflake” designation, and if you factor sex into the equation, you must pick from male/female and cis/trans. Our society has such a problem with even considering that bodies are not, and never have been, binary — which makes coming out as intersex or genderfluid a complicated, and often humiliating, conversation. It is, however, a necessary one, because the fact is that putting physical sex into the equation of gender leaves us with more sexual ambiguity, not less.

“But what are you really?” “No, seriously, I was born neither.” It sounds like a political statement. Our intersexed bodies are inherently politicized from before our births. On particularly angry days, this is a comfort. I didn’t have to choose to rebel against the gender binary, against society — that choice was made before I was conscious of it. Other days, as any LGBTQ person knows, your identity is not meant to be a statement, but you cannot escape it.

Perhaps as frustrating is the way in which this assumption invalidates fluidity in and of itself. Hall, and genderfluid persons today, face the constant pressure to “choose.” The assumption, insofar as I can make sense of it, is that we are all merely gathering our courage to declare a transition. Sex and gender are, as anyone who has experienced dysphoria can attest, are not homologous, but are certainly linked. To say that gender is non-binary, we must admit as a society that sex is also non-binary. This is not a case of some species of whip-tail lizards or banana slugs, where we point out the alien possibilities to middle-class liberal moderates and beg them to take us seriously — this is a case of finally, finally imposing the understanding on society that sex really actually is a spectrum, and always has been, and always will be. If you want this species to be binary, be honest and declare yourself for reassignment surgery at birth, and admit that it is your system that is unnatural, not our existence.

This issue is tied directly to sex education, or more accurately the utter lack of sex education. To come out as genderfluid invites speculation, eye-rolls, and a frustrating conversation about what is sex, what is gender, what is nature. To come out as intersex is a different conversation, one that automatically crosses the boundaries of polite conversation. The taboo around asking, discussing, or speculating about someone else’s genitals is a comfort that trans and intersex people are both denied outright. Yet to try and explain this to people, unsolicited, is seen, as the height of ill manners. It’s a catch-22. Those who ask are the last people in the world you want to explain to, and there is no way to bring such a subject up casually. Yet we are still romantic, sexual beings – at least, in the same ratio as the rest of the population. Sooner or later it will come up.

Throughout Hall’s trial and complications, the authorities continually asked them to choose one or the other. When Hall refused, they were confused and angry. Why did they keep switching back and forth? Hall’s response is probably my favorite line in any historical case ever:

“I goe in weomans aparell to gett a bitt for my Catt.”

The argument for reassignment surgery on intersex infants usually has something to do with normalcy, mumble-mumble choice, mumble-mumble bullying, mumble-mumble sex life — and hanging over it all, this established, unstated fear that an intersex person will never be accepted in society, never have a healthy sexuality, always be a freak. Dear readers, I submit to you Hall’s response, and assert that, if T. Hall could get a bitt for their catt in veering back and forth between breeches and frocks, we modern freaks are perfectly capable of finding lovers in both, or either, or neither and naught.

In a decision that is both terribly familiar and uncannily progressive, the authorities imposed a unique decision on Hall’s body and identity: they were to go about in men’s clothing, but with a woman’s bonnet and outer frock. The main transgression here was not the non-binary, but the fluidity. Despite the clear understanding of a handful of Virginian colonists — that, in fact, Hall was neither male nor female, nor simply faking it — modern American society seems to have a serious problem with the conversation, and maintains a strange and unrealistic premise that there are two factors that compose our identity: sex, and gender. It does not ever seem to occur to most people that, in fact, there is a vast difference between physical sex and sex assigned at birth.

Hall was raised female, as was I. It was only during puberty that the difference became clear between the line-drawing diagrams in the health books and the very complicated nature of my own body, and not until years later that I realized what this meant. I often wonder how Hall figured out their sex, and how the subject came up with their first partner. Hall left home fairly young, and so there was never the deeply unenviable, yet probably inevitable, conversation with family members who distinctly remember, for example, changing diapers. To explain all of this invites questions; almost — as in Hall’s case — invites inspection. Maybe it just didn’t matter – maybe when Thomasine decided to be Thomas for a while, and joined the navy, and learned the phrase “To get a bitt for my catt,” they realized pretty quick that none of the men nor women cared one way or another, and neither did they.

In further researching this case, I have found a number of wonderful, agency-giving, progressive scholarly articles that close Hall’s account with a head-shake and a sigh, lamenting the fact that Hall, after the General Court in Jamestown handed down a decision that their identity would henceforth be “both and neither,” must have lived a miserable, lonely life until either death or leaving the community upon finishing their indenture. This, to me, seems similar to the sigh and head-shake that leads to reconstructive surgery for intersex infants. How can genderfluid people live normal, healthy lives when everyone knows we’re freaks? Easy. We do. And I think that starts with pointing out the obvious: that gender is not binary, and neither is sex. 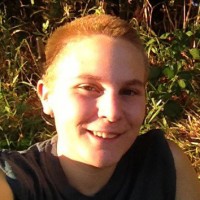 L.C. Thompson is an American history student who writes about modern indigenous history, labor, and gender. He/she/they spend most of his/her/their time arguing about gender politics and dreaming about archives with gender-neutral bathrooms.

Add a comment
4343138 Comments on The Case of Thomas/Thomasine Hall: Intersex and Genderfluid Identity in the Colonial Periodhttps%3A%2F%2Fthe-toast.net%2F2016%2F05%2F26%2Fintersex-and-genderfluid-identity-in-the-colonial-period%2FThe+Case+of+Thomas%2FThomasine+Hall%3A+Intersex+and+Genderfluid+Identity+in+the+Colonial+Period2016-05-26+15%3A00%3A40L.C.+Thompsonhttp%3A%2F%2Fthe-toast.net%2F%3Fp%3D43431