“Reckless and Hopeful Subservience”: A Guide to Endometriosis

Two years ago I awoke in a sweat-sheen usually reserved for disturbed film protagonists, my eyes dilating against the night air, crying out in gurgling disbelief. Something abdominal, in the territory beside my groin, felt as though it had cracked open like an egg against the rim of a glass bowl. As my girlfriend burst painkillers from their blister pack and wrapped a hot water bottle in a towel, I began to agony-vomit. Surely if the splitting feeling worsened I would pass out. Was I experiencing hospital-worthy pain? How could people give birth if contractions were more excruciating than this?

At the time I was in deep suburbia with no car and no ambulance coverage, so I decided I would take the strongest painkillers we had and if, after fifteen minutes, I was still sweating from a splitting abdomen, we would phone a friend. I started falling asleep on the toilet, so the acuteness must have eased. My girlfriend cleaned up, changed my pajamas, and acted as a crutch to help me back to bed.

The following week, an ache radiated from one side of my groin at exactly the point my hips hinged to sit. I invented a pain management regimen wherein I rotated painkiller brands until my stomach or liver — who knows — began to burn when I popped a pill. The ache, which I accommodated at work by sitting in a hammock shape with my feet on my desk, began to interfere with my ability to think about anything else. My girlfriend appealed. She hypothesized something might be infected and I should see a doctor before my blood was poisoned. She didn’t want me to die of stubbornness, in bed beside her.

If my mother had been a lawyer or a salesperson, I might have visited the one doctor I booked an appointment with, taken antibiotics for chlamydia, and ended up with whichever specialist was in Emergency on the day I was finally wheeled in. But my mother is a midwife. She begged me to drive to her house across the state border, booked me an ultrasound involving a probe wrapped in a plastic bag, and organized an appointment with one of her co-workers, an obstetrician-gynecologist. They chatted about a baby they’d delivered the night before while I tugged my underpants off and hoisted myself onto a bed. The specialist placed a sheet over my groin with the businesslike flick of a waiter setting a tablecloth. She snapped on a latex glove, lubricated her hand, and announced I had cysts on my ovaries. One was so large she could feel it. It had bent my fallopian tube, like a branch holding an orange.

There was a possibility the cysts were symptomatic of a chronic disease called endometriosis, but she couldn’t be sure – the only way endometriosis is diagnosed is by sight. I would need a kind of keyhole surgery, a laparoscopy. She put me on a waiting list, clicking her tongue at whatever daunted her in my ultrasounds. Did I experience bad period pain? she asked. “Yes. Always,” my mother said.

Our reproductive organs have a neat one-way system: ovaries make eggs and send them down the fallopian tubes, where our uterus receives the eggs and more often than not bleeds the eggs out. I think of endometriosis as a uterus gone rogue; instead of simply receiving and disposing of eggs, the uterus decides it wants to send things via the fallopian tubes, too. But because ovaries don’t have the capacity to receive anything, the uterus posts the only junky gift it’s got — uterine wall cells — up the fallopian tube. When the ovaries can’t accept those cells, they flow out into the abdominal cavity, where everything is showered in Essence of Uterus, like confetti at a wedding. Cells might land on the outside of the ovaries; they might end up attaching to the bladder, or the pouch of space behind the uterus, or the bowel. Once they have landed, they begin to mimic the cells inside the uterus: each month, when it comes time to menstruate, the dispersed uterine wall cells bleed like cuts into the abdominal cavity, where the blood lingers and forms cysts.

In truth, this is only a theory; nobody knows with certainty how endometriosis works. Nobody knows what causes it, either. There are only ideas: stress, genetics, perhaps a hormonal imbalance. A woman of shamanic inclinations once told me it’s a product of an unidentified childhood trauma I need to reconcile. A friend who also has endometriosis told me it’s caused by eating sugar. If you are between the ages of 25 and 40 and you have a uterus, you are statistically more likely to have endometriosis than die in a car accident or find yourself audited by the tax department. In Australia, it is more likely you will have endometriosis in your lifetime than breast cancer; in America, the UK, and Canada, the likelihoods are almost on par with each other. It takes, on average, ten years to diagnose endometriosis from the point symptoms begin to emerge. I am the average. There is no known cure.

I remember my mother standing at the end of my recovery bed in hospital and tearing up over my diagnosis, while the woman beside me announced to nobody that she felt she had possibly overdosed on self-administered morphine. My mother wept with guilt and sadness and relief at the confirmation I had not been a hysterical teenager — that my pubescent periods were accurately depicted every time I had turned papery, vomited, and bartered with the god of the ceiling above our bath to accept acts of kindness in exchange for eliminating my pain.

It was only my gynecologist and me sitting in her office after the laparoscopy, when she explained what my diagnosis meant. She shook her head at postcards she had taken of my red and bloodied insides. She despaired aloud at the state of my disease — out of four stages of advancement, I was sitting at a late stage three. You are so young, she kept saying. My abdominal area was coated with lesions and part of an ovary had to be removed. Penetrative sex might be painful. If the condition appeared on my bowel I might have to consider a colostomy bag. My fertility was compromised. I was so young!

The only way I could slow the development of the disease was to halt my periods using hormonal contraception. Alternatively, she offered, I could periodically inject a drug that would put me into early menopause, or I could have a hysterectomy, or if I could still fall pregnant, I should consider doing so because sometimes pregnancy cured people — plus, free baby.

I was so young.

My treatment options were endless and amazing and I pretended to pick one, but actually I picked none of them. During our consultation I thought about my gynecologist. Before arriving in Australia she had birthed one of her children in a refugee camp. She endlessly delivered infants and performed surgeries and delivered devastating diagnoses, and I was one of hundreds of patients under her care. Could I reasonably be sad in this appointment? Had I suffered? I had universal health care.

The doctor snapped on another disposable glove and gave the stitches knotted into my healing abdominal scars a firm, removing tug. Something in that quick, final procedure stirred a tremor in my diaphragm. I smiled as she handed me two pamphlets explaining endometriosis. I thanked her profusely, and remained bright and sensible while I paid for the consultation. I was fine! I would walk to a nearby mall and buy something really luscious, like an end of financial year t-shirt.

The department store I found myself in was fluorescent. Midday shoppers murmured past: new mothers, high schoolers on their lunch break, older couples who had travelled from sparser towns in the country to buy a vacuum or outfits for their grandchild’s wedding. In the world outside my doctor’s office, endometriosis seemed both unreal and unknown. I had never sounded the word “endometriosis” until two months before I was diagnosed, and that alone made me doubt the disease was remotely terrible. Also, I decided as I strolled the pallid bowels of the department store, “endometriosis” was practically a fake word. It was Parseltongue. I could say it to snakes and they would slither about and do things for me.

I slipped past prowling perfume vendors and filed myself between two parallel racks littered with young adult-wear. An assistant at a distant counter folded the crumpled changing room rejects. She glanced at my arrival in her otherwise deserted section. The imperative language of Sara Bareilles’ “Brave” throbbed over us.

I browsed absently, rubbing material between my fingers, and picked out a pair of black, waist-high jeans. I turned them on their hanger, held them against myself, and returned them, placing my spare hand over my abdomen and gently pressing the area. After a month of recovery, I was still too sore to sausage-skin into anything fitting. I slid my hand beneath the hem of my singlet and ran my fingers over a small knot of skin near my left hip, across to an asterisk over my bladder, and then up to the center of my belly button — shallower than it had been a few weeks earlier, with a hard lump pronounced at its surprised little mouth. It was a triangular constellation, marking out the memory of keyhole incisions where long instruments had purveyed and then erased endometrial damage with incisions and burns. Each lump smarted beneath the salt of my hand and I recalled the spasm that had surged beneath my lungs as the gynecologist tugged out my stitches.

Patiently, politely, I had participated in months of reckless, hopeful subservience: of lying down while doctors tested and palpated and examined and queried, but never wholly explained their method — or my disease. It had been like watching slabs of ice slip past on a waking river. And now the tremor resurged and the river swelled to meet me. I began to shiver with anger at the prospect of decades of reckless and hopeful subservience: altering the course of my life by having a child, or going mad with medication, or spending my time sitting through support group meetings and specialist appointments for a barely believable disease.

A week earlier my mother had called to ask about the ongoing pain of my recently discovered disease. At first my response had been tinged with surprise: “I have none!” I said, which was a lie. I rationalized that any tenderness was probably surgical bruising.

Eventually my mother’s conviction that I was experiencing eternal, withering pain tugged anger from me. “I have none,” I bit, sitting on her couch with a cup of tea the night before I reentered the gynecologist’s office. It was as though being gentle toward her worry might séance the chronic discomfort she believed I had into existence.

If the department store sales assistant had peered across the floor at her only midday customer the next day, she would have caught exactly the moment I thrust my entire body into the sales rack, grasping garments at either end of the display, my mouth wide and silent. I hugged clothes that would eventually sail off into the lives of strangers, and sobbed while Sara Bareilles wanted me to be brave. There were no words, no pamphlets to explain this strange emotional country of which I was so terrified. 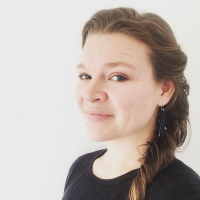 Rosanna Beatrice is a musician, writer, and researcher currently based in Canberra (the Washington, DC of Australia).