I am anxious (I am always anxious) and so I have been reading Emma Lathen again, scouring the used bookstores and buying up all I see, reconciling myself to paying for the same book a third or fourth time, because they are all about the same size (small) and have the same interchangeable titles.

Fair enough — the basic plot is always the same, too. John Putnam Thatcher, vice-president of the Sloan Guaranty Trust (“one of Wall Street’s most august institutions”), stumbles into a murder. He solves it by observational acumen and understanding of financial matters. He makes wry observations. He does not fall in love.

If mystery stories were arrayed along a spectrum of cozy to hardboiled, Emma Lathen books would stand somewhere in the middle, weirdly aloof from both ends. But for me they are comfort reading in the most basic sense — I read them and am comforted. This is not a small thing.

Martha Henissart and Mary Jane Latsis wrote the John Putnam Thatcher mysteries and published them under the name Emma Lathen; they wrote others under the name R.B. Dominic. Henissart was a lawyer; Latsis was an economist. (Description in A Catalogue of Crime by Jacques Barzun and Wendell Hertig Taylor: “this interesting pair of New England businesswomen.”) They met in grad school, at Harvard, in 1952; Harvard Law School had started admitting women just two years earlier. They began writing together in 1960.

I wish I knew everything about them, but I know hardly anything. Except that they are incredibly graceful writers, who blend irony with sentiment so beautifully that the result feels the way life should feel. From the description of a lunch scene:

At last Robichaux dithered himself into petulant repudiation of all suggestion. The waiter played his final card. There was an offer of olive oil and vinegar. Perhaps the gentleman would care to mix his own. The gentleman would. The waiter retired with the triumphant air of one who has handled a difficult situation well.

In John Putnam Thatcher mysteries there are no serial killers or people acting out for tortured psychological reasons; money is always the motive. Most of the characters, up to and including the murderer, are a recognizably human blend of virtue and vice. Example: “‘Morris will be quite a nice person if he ever grows up,’ she said with absent affection but no undue respect for her chief. Thatcher was inclined to accept the assessment of both: Mrs. Cobb was quite capable of murder, and Richter would be quite nice when he grew up.”

But while the blend is recognizable, the extremes are shaded away. The books do not trade in terror.

Here is another thing I know about Latsis and Henissart: they were swashbucklers. In an interview with John C. Carr for his book, The Craft of Crime, Latsis describes doing “a study of the economic impact of the summer theaters for the vacation industry of New England, for which there was no information, so I made it all up, you see, and it’s now passed into the lore.” Latsis’ New York Times obituary describes a life chosen, not compelled, not defaulted into:

With their success, the women, two slender brunettes often taken as sisters, bought a house together in Warren and spent part of each year there, working and talking over plots during long hikes through the White Mountains, their collaborative solitude broken only by Miss Henissart’s succession of suitors and Miss Latsis’s ever faithful Walter Frank . . .

In a concession to an old-fashioned sense of propriety and Miss Latsis’s aversion to marriage, she and Mr. Frank maintained a 40-year romance while maintaining separate residences.

When I read about John Putnam Thatcher, I think about my grandfather. My grandfather was a corporate lawyer in Washington state — not international or even national, in the vein of John Putnam Thatcher — but in 1970 The New Yorker described John Putnam Thatcher as a “man of much charm, bottomless suspicion, and Euclidean squareness,” and those descriptors could be applied with equal force to my grandfather. My grandfather was tall and thin and smoked a pipe in the garage. When he retired from the practice of law, he asked that he be given, in lieu of a gold watch, a copy of the Oxford English Dictionary. He was “good” in an easy-to-describe way: he believed that everyone should follow certain standards of behavior, and he followed them himself. When cars piled up behind him while he was driving on the country roads by his house, he pulled over to let them go by.

And yet. My earliest memory of my grandfather involves me touching something that I wasn’t supposed to touch. Something valuable, that could be broken by a small child. His resulting rage. My terror, complete; as real as the fact that every day of his life he studied the weather report to find out what the average temperatures in the cities nearest his grandchildren were.

I came across the John Putnam Thatcher books the year I graduated from law school. Which was also the year that my grandfather died. It was not a good year for me. I was not at all like either my grandfather or John Putnam Thatcher, and that year was determined to impress that fact upon me. I had liked law school; I had maybe even loved it. I had hoarded details: my Corporations professor who only wore Hermès ties bought for him by his wife. The silver anchor they used to lay across the bench at federal court when the court was sitting in admiralty. There had been a moment in law school, when I walked down the street in my first Ann Taylor suit and thought maybe I could transform myself into someone like my grandfather. There was a magic to the idea, to leaving my terrified, anxious, disorganized self behind and emerging someone who knew how the world worked and was unafraid to pull the levers.

It hadn’t happened. Instead I had stopped opening my mail and filing my taxes. Instead I had moved to a midwestern city where I didn’t drive because driving terrified me. I walked to work. I clerked for a judge and I was not very good at it, and I didn’t see a prospect of getting better. I was making things harder than they had to be for myself, yet my fear and terror seemed to me at that time both valuable and important — I felt that I would be less of a person without them. I hated and was ashamed of them, and in equal measure I insisted upon them. Every night on my walk home I stopped at the central library, which in those pre-recession days stayed open until eight, and hunted desperately for something to read. And eventually I found Emma Lathen and John Putnam Thatcher, and they made me feel safe.

When you live with a brain and body in a state of constant alarm, safety and comfort are not small things. A book that tells you that you can survive, a book that makes survival seem possible and peaceful for the hours you spend reading it, is a gift.

But why these books? Some of it has to do with how precisely they sketched the details of a certain kind of working life, a life that I was inhabiting and simultaneously failing to thrive in. In that same interview with Carr, Latsis said: “There may be societies in which this is not true, but most people go to work, and they do not go out to a field to dig up radishes: they go into a big, big institution of one sort or another, and we try to catch the flavor of that kind of life.” The books reflected that world back to me, dwelt on it fondly, made it seem both smaller and bigger — funny and almost distant. They made it into something that could be coped with, not something that was going to eat me alive.

And then the mystery part, the violence and death. There is this idea that the comfort of detective stories comes in the forces of disorder and menace being unmasked, the return to peace of a community: “Nobody seems guiltless, nobody seems safe; and then, suddenly, the murderer is spotted, and — relief! he is not, after all, a person like you or me. He is a villain — known to the trade as George Gruesome — and he has been caught by an infallible Power, the supercilious and omniscient detective, who knows exactly where to fix the guilt.” Thus Edmund Wilson, being mean about detective stories.

But it was not the solution to the violence that made the Emma Lathen books comforting to me. It was the acknowledged fact of it — its coexistence with the minute and lovable details of the world. Over and over again, the books peel back the most normal of commercial transactions to show fraud and murder. Violence and fear are put in a box, but they’re real enough to bite. The books made my fear of such things understandable.

When I describe a book as “comfort reading,” it feels like I am saying that the book is less than other books; that it is a way of escaping from the world. The year my grandfather died, I used books as airplanes, as time travel, as a way of getting from Point A to Point C without touching down in between. It might sound silly. But I don’t know how I would have moved forward without the possibility of escaping, however briefly, the world I felt I was failing at.

Emma Lathen books took me out of that world and delivered me back to it with a perspective I hadn’t had before. The existence of the authors suggested a way to live and work within institutions that didn’t involve giving up parts of myself, and their books suggested that fear was not an inappropriate response to the world — that there was real violence at play, violence felt not just by me, but by everyone. The books made me believe that one day I would be able to look at my grandfather and see the parts of him that charmed me and the parts of him that scared me as existing within the same whole — and that maybe, eventually, I would be able to see myself the same way. I cannot imagine any book giving me a greater gift. 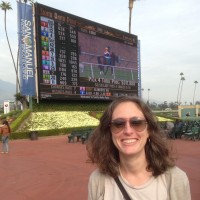