Insufficient Funds: On Being Bad at Your Job

The summer after my freshman year in high school, I took my first real job. Not the first time I’d be working really hard or getting paid, but the first time I needed paperwork. I was 14, uncomfortable with every inch of my body, shy.

Minimum wage was $4.15 an hour, at least in Alaska, but without expenses like a car or kids or booze habit, the money added up nicely.

CheckRite is where your check ends up if you don’t have enough money in the bank to cover it. There are all kinds of words to describe this situation: bounced, kited, insufficient funds, overdraft, or simply a bad check. The bank stamps NSF on the check and sends it back to whoever deposited it. If you try to cash a check from Aunt Valerie for $40 that she sent for your birthday but she’s a little light on dough that month? Sucks for you. The bank charges you a fee, Valerie’s bank charges her a fee, and you get the check back to frame as a reminder of why getting older isn’t so great.

If you are a business, things are a little different. Or at least they were back in the early 1990s. Nowadays, things move a lot faster and electronically and basically by magic. If I had a business I wouldn’t accept paper checks as payment for anything.

If someone writes you a check for $23.67 to pay for developing film and she doesn’t really have the money, hopefully you work for a business that has retained the services of CheckRite. If so, the problem becomes ours. We’ll hunt down the evil doer who tried to get off without paying for your services.

As you can imagine, people are not thrilled to hear from you when you work at CheckRite. I was lucky enough to mostly avoid calling patrons, since everyone thought I was too young to handle such vitriol. I got to do a lot of alphabetizing instead. Check designs didn’t vary too much back in the day, but sorting through the piles of checks delivered from banks was strangely interesting when you got familiar with names.

“Oh look,” I’d think to myself as I flipped through the plastic alphabet sorter doo hickey. “Bob Banner’s at it again.”  In just a few weeks I had my regulars and got a bit excited, though disappointed, when I’d see a repeater.

I hated having to take a lunch hour. I worked straight through my first day, thinking I could get off early. Then my manager kindly explained that a break wasn’t optional but was required by law. To sit alone in a dark little room and try to take my time eating was hideous. Even if I went out and walked half a mile to KFC and ate their gross fries, I still couldn’t fill sixty minutes.

While the main secretaries were at lunch, I’d man the phones and reception. I recall a guy calling back after coming in to the office; I’d talked to him and told him some misinformation, though I don’t recall if it was intentional or not. I answered the phone and recognized his voice. I knew I’d made a mistake and didn’t want to deal with it.

“I was there earlier, talked to a lady. Young looking, blonde, slim.”

Did he just call me slim? Oh wow, really? Slim. I’ve never thought of that word to describe myself before. Hmm, slim. Do people even say that?

“I’m sorry sir, she’s not in right now. You’ll have to call back later.”

I crossed my fingers and toes he wouldn’t walk through the door any time in the next thirty minutes while I was still sitting out front.

CheckRite was in midtown, up a hill from downtown which isn’t saying a lot in Anchorage. The office was upstairs in a two story office building, next door to the shoe guy, near a constantly empty mall anchored by Sears and dozens of other small mildly unsuccessful business ventures. In the mornings, one of my parents would drop me off. After work I was supposed to take the People Mover back to the south side of town.

I’d call my dad two three four times a week, begging him to come out of his way to pick me up on his way home from the office. It worked maybe once a fortnight. I was fourteen so none of my friends could drive. I didn’t want to seem pathetic so I never asked anyone from work for a ride, recognizing that it would cross a line from Office Associates to Real Life that would end for me when school started again.

After a long day of sorting checks, sending out second notice letters or amending files for partial payment, I’d walk a block to catch my first bus. It wasn’t a long ride so I didn’t mind it too much. Then I’d disembark and wait for my transfer. It was around fifteen minutes, but standing awkwardly on the street, alone, without a bench or any kind of prop, it felt endless.

One day in the pouring rain, a red car pulled over.  The driver opened the passenger door from inside, leaned over, and offered me a ride.

“Thanks, I think I’ll just wait. Only a few more minutes,” I said since I am many things but not dumb enough to get into a stranger’s car.

The driver, a guy around 25, nodded in agreement. “I understand but I feel so bad for you. Are you sure?”

I didn’t get in the car but wished I had and that he’d murdered me and then my parents would be sorry for not giving me a ride.

Waiting for the bus over the first week I memorized my social security number. I didn’t know a person was supposed to do that, till I filled out my I-9 and had to bring my actual card into the office. Mortifying. I vowed never to be in such a situation again so I practiced it every day till it stuck in my head forever.

The transfer bus was worse than the first, with a ride close to the half hour mark. I never thought the bus driver would remember me, feeling invisible in the adult world like most teenagers, so I’d get nervous a mile before my stop. I didn’t want to wait too long to pull the cord, missing my chance, but I also didn’t want to get off to early and have to hike up a busy hill.

One day, I pulled the cord a moment too early. The driver looked in his rearview mirror right at me and said, “Don’t you want the next stop?”

Flabbergasted, I nodded and thanked him when I got off a few minutes later.

When I left in early August to go on a trip to visit my grandparents in Western Samoa with some of the money I saved, I gave my notice very seriously to my boss. It may have been a bit formal for a minimum wage temp to believe they’d need a full two weeks to find someone who could possibly replace me.

They cut me a check on my last day so I wouldn’t even have to wait for it to come in the mail. Or maybe not, since that seems unlikely and overly thoughtful. All I know is that I walked down the flight of stairs into the bright sun and climbed into my mom’s blue Suburban and never thought about that place again. Until a loan shark place started playing ads constantly a few years ago. “Check into cash,” said fast and cool like you are just too busy to get your money at less than a 275% interest rate. Kinda sleazy, though legal. Kind of like CheckRite. 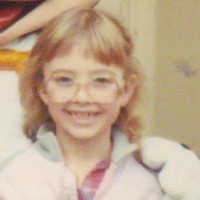 Eliana Osborn spends too much time in the sun but she also teaches English at Arizona Western College.