The Resurrection of the Body: On Family, Mental Illness, and Grief

Previously by Rachel Brownson: Sunday at the Children’s Hospital.

My grandparents’ living room was almost too warm after the cutting December wind outside, and the Christmas tree blinked pink and gold, ringed with piles of boxes. My cousins and their parents could be heard laughing and bickering in the den downstairs, and as we shed our chilly coats and exchanged the usual hugs, I looked around for my uncle Dave, wondering which version of him was here today. As we sat down I heard his heavy step on the deck behind the sliding doors, and he came slowly into view: tall in his dusty-looking coat, his round belly pressing at the zipper, his University of Michigan knit cap pulled down over his ears, cigarette smoke emerging in clouds from behind his graying beard. He was pacing the deck as he often did, walking on the wooden benches, followed closely by his hyperactive little black poodle. Seeing us, he stubbed out his cigarette, came into the room in a gust of cold, and made his round of hugs. “Rachelieu,” he said—pleased as always with the nickname he’d found for me—as he wrapped me in his big smoky arms.

It never occurred to me growing up that not everybody had an uncle who was odd in the particular way Dave was odd, that schizophrenia did not run like a crooked line of stitches through the cloth of most other families the way it did through mine. I was pretty sure for a long time that the primary reason everyone told kids not to do drugs was because the experience might trigger a psychotic episode. This is not to say that I felt entirely comfortable with Dave’s illness; we were told from a young age not to be alone with him, and I remember a few times early in my childhood when he said things I knew were not the kinds of things one says to children. His first hospitalization had happened before I was born, and it wasn’t until I was a teenager that they found an antipsychotic medication that worked well for him.

My father had gotten the call in the evening: a family friend calling with condolences before we’d even heard that Dave had been found down on the sidewalk outside the basketball game he’d just attended, nearly dead of congestive heart failure and confirmed dead at the emergency room soon after at the age of 49. I was sitting in the next room, and as soon as I heard my dad’s terrifyingly boyish-sounding What??, I knew. It was my first big death. I walked automatically to the kitchen and made tea for everyone that no one drank, which is as good a sign as any that I was supposed to be a chaplain. I went with my family to the emergency room, but I didn’t see his body. After seeing my first few dead bodies in the course of my hospital work, I toyed with the idea of regretting not seeing Dave’s body, but I don’t regret it, not really.

I only regret not entering that room when I have the dream. In it he is dead, huger than he was in life, stumbling along the sidewalk by my parents’ house, his eyes with deep purple smudges beneath them, his belly swollen so large he is almost dragging it along with him. He holds the handle of my sharp kitchen knife out toward me and begs me to kill him again. In the dream I am not afraid of him, but the flood of pity I feel is almost unbearable, because I know I cannot do it.

After Dave died, there were so many people who said to my very religious family that at least Dave, in heaven, was now free from the illness that hemmed in so much of his life and brought him so much torment over the years. At the time I did find this comforting, the idea of him at peace in his thoughts at last. Schizophrenia is no joke. To wish him free of that suffering was an impulse that came out of love, and I took it (and continue to take it) as such from well-meaning condolence-givers.

My thinking on the subject changed quickly, though. I can’t pinpoint the moment when “at least he’s free of his illness now” stopped sounding like comfort and started sounding like an erasure of everything that made my uncle who he was in the time I knew him. Would I even recognize a version of Dave without his schizophrenia? How could one possibly begin to tease out the good—his quirky humor, the wildness of his metaphors, his kindness and care for others with mental illness—from the grief the good grew out of?

This year I will turn thirty-five. Like last year I will most likely mark the day by going to work, opening a few cards, coming home to my apartment, pouring myself a glass of red wine, and trying to persuade my cat to be a lap cat while watching something on Netflix. When I was a dreaming awkward bookish teenager this is not how I imagined my thirty-fifth birthday would go. I did not imagine that my romantic life would look like twelve years of unintentional celibacy punctuated by innumerable false start dates, or that I would be staring at the approaching end of my body’s fertility with no prospects in sight. I did not imagine I would end up depending on a far-flung network of friends, siblings, and parents for my experience of family, that my house wouldn’t be full of people, children. But here I am. Every once in a while one of those studies crosses my feeds—you know the ones, tying loneliness to dementia, decreasing social competence, heart disease, early death of all kinds—and I have to weather a moment of bodily, animal panic.

In my grandparents’ hopes and wishes for their children and grandchildren, marriage is secondary only to adherence to the Christian faith. Since I’m an ordained Christian minister they figure I’ve got the latter covered (I am discreet with them about my various heresies), so now their attention is intensely focused on the former. My poor grandmother, deep in the tangled weeds of Parkinson’s dementia, can barely string two thoughts together, but she always remembers to ask if I’ve found somebody to “bring home the bacon.” All of my younger siblings and cousins have basically paired off, so I’m the last loose end.

Dave was the loose end in the generation before me, and he had wanted to be married even though he couldn’t hold down a job for very long. Dave who paced and smoked and smoked and paced around his house until there were rings of soot around the ceilings we had to scrub off after he died. Dave who spent every evening, every weekend dialing his phone, dialing, dialing, calling every person he knew just for a chat, dropping by my dad’s office to play pool over his lunch hour, starting meetings at church for people with mental illness, grasping at every possible relationship and demanding from his community the support he needed because without it he would quite literally go mad. I got those calls, too, invariably at eight in the morning on a Saturday, my uncle’s deep voice making rhymes for my name and asking how the car he’d sold me (for a dollar) was holding up (not well). Much as I loved him—and I loved him very much—I was always afraid I’d end up like Dave, living alone, dying alone on some sidewalk, found by strangers. But of course he wasn’t alone. He made sure of that because he knew what he needed. His brain had made clear to him what his life’s limitations were going to be, and so he worked with what he had.

We don’t get to be delivered of some things. Schizophrenia was never going to stop being part of Dave, and even if I do find someone eventually, I don’t get to go back and redo my life so I can have the family I always thought I would. These are body truths, the kind that scar, irrevocable. Will there be some next life that will wipe all that away? Who knows? All I know is that to live in hope that all that has been done will one day be undone is to refuse to inhabit the world as it is, and to deny the goodness of whatever good we wring out of the particular ways in which we have been wounded. The resurrected Christ walked among his disciples still wearing the marks of his torture and death.

Since my new upstairs neighbors (a mother and son) moved in I tend to wake up early, as soon as I hear the quick steps of the four-year-old boy unrolling over the entire length of the house above me. When they first moved in, the woman knocked on my door bearing anxious cupcakes and pre-emptively apologizing for the noise, but I don’t mind it at all. I work all day with children who are sick, whose bodies and energies are hemmed in and shaped by illness, so whenever I wake to this boy’s healthy running, his occasional energetic tantrums, his loud delight, I say a prayer of thanks. He is not mine, but he is here, and I am grateful.

These days my friends all live far away, so we mostly keep in touch through video chat. It has taken me a long time to be able to reach out to them when the latest article about loneliness has me gasping with visions of a brain bleed felling me in the shower, the gruesome conjectures about how long it would take for someone to notice. Now whenever I scroll through my contacts I remember Dave’s scribbled and yellowed address book, there by his phone, and I say a prayer of thanks. He knew better than I what family means, and I would not change him, other than to keep him here with us. But though he is gone, he is still mine, and I am grateful. 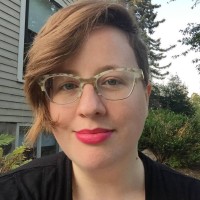 Rachel Brownson is a hospital chaplain and earnest writer of poems who lives in Michigan. She tweets at @rkbrownson.