“The Spinster’s Almanac”: Poetic Advice for Finding a Different Story

I had hoped that university would be my golden ticket to a golden world far away from the endless kitchen sink drama of my home-life. So really I was always bound for disappointment. Rather than dancing my way through a golden haze of new friends and old books, I have traded one set of insecurities and small sadnesses for another. I have watched my friends couple off, joke about another notch on their bedpost, and all while another night passes and my bed is empty. It did not worry me before. There was always so much time; months, years even. But now I feel I am creeping closer and closer to Miss Havisham levels of deluded loneliness, and that time is slipping through my fingers.

I do not necessarily want a relationship, I merely wish to be attractive, to attract and occasionally fulfill the urges I feel as strongly as anyone else. I want sex. It should be easy. Perhaps it would be were I not as virginal as a Regency romance heroine. Only one man has ever deigned to kiss me and I was obviously horrible at it and no doubt the butt of many jokes the next morning. I do not wish to be merely a joke.

A friend once told me that if I were an element I would be ice, and as much as I wanted to snap that ice wasn’t one of the four elements, I didn’t. It was true. I am as charming and kind as I can be, but I am so afraid of rejection that I can’t ever take my love life into my own hands. So I am cold. Frigid. But I want to melt. I spend my days poring over poetry and trying to find something meaningful in it. Perhaps poetry is a way to help me find something meaningful in myself and to find a way to share this with another.

Today, dear reader, I’d like to talk about stories and storytellers. When I was at university myself, I took a course on the history of writing and rhetoric. My delightful maddening professor lectured about European fairytales, how they were a shorthand parenting tool to teach young women about sexual threat and appropriate male protraction and other truish but oversimplified lessons. Popular storytelling hasn’t changed much—tellers of contemporary stories may imbue them with politics that are superficial, conventional, or subversive, and may tend to stick to the same cluster of characters and conclusion. You’ve been spending a lot of time listening to the same stories, of Miss Havishams, ice queens, and regency heroines. I don’t blame you for this. They are common stories, foisted on women who do things in their own time, willingly or circumstantially.

But what other ways are there to think about a story? When I set out to find a poem for you, I intended something sensual and ornate, about how passion has different guises, how you can subsume it in cooking or painting or botany, and how that immersion can transform your whole being, allows you to relate to the world differently and how people will pick up on it. I found something a little different; a poem about authorship and uncertainty and transformation and memory: Kim Addonizio’s “Lives of the Poets.” It speaks to me about the endless variety in the world. Those of us who write start from wildly different places, take on different aims, and there’s no guarantee we’ll end up where we intend to. But we try, and so must would-be lovers. So must you.

Addonizio opens “Lives of the Poets” with a series of charming fairy tale-easy grand events:

One stood among the violets
listening to a bird. One went to the toilet
and was struck by the moon. One felt hopeless
until a trumpet crash, and then lo,
he became a diamond.

Would that it were so simple. You go about your days and crash! it comes, a brilliant poem, a kiss, passion. It’s easy to get hung up on the second and third sentences here: the moonstrike that comes unexpectedly, the transformation after prolonged hopelessness. But don’t forget Addonizio’s first poet, who seeks out beauty and stands listening for something more. It might seem a commonplace pastoral image, but that first poet isn’t waiting for the revelation of the next line. She leaves the house, ready to observe and receive.

Okay, so what does that look like? Addonizio shifts abruptly into the first person here: “I have a shovel. / Can I turn it into a poem?” You have kitchen sink drama and ice. Can you turn it into passion? Addonizio creates lovely humourous tension, writing long poetic-pastiche-ish sentences (the descriptions of the “ones,” the boiling of milk thistle and winged thesis) that she punctuates with short conversational phrases. She skews bombasic: “Look, I’m topless! / Listen: approaching hooves!” Her narrator wants attention, and damnit, she’s willing to try some things to get it. Addonizio appeals to the senses with her imperative “Look!” and “Listen!” She risks sounding a little silly, approximates the voice of a novice writer experimenting, going big in emotion and drama to convey the urgency of an idea. This is an important lessons of learning to write, and of trying to get together with someone. It’s also nearly impossible to force before you’re ready; you must be willing to be silly or obvious because that is the way to get to something grand.

But it’s true, grand is a goal, not a promise. Addonizio returns us to the poets, and a grimmer set of circumstances:

One drowned in a swimming pool.
One removed his shoes
and yearned off a bridge. One lives
with Alzheimer’s in a state facility, spittle
in his white beard.

Some of us are cut down before we barely get a chance to try, some forced to endure unearned pain. It’s her second “one” here that particularly haunts me, the metaphor of removed shoes to indicate an abdication, a refusal to continue further, only the poet’s abstract longing described as continuing on, carrying him to his death. It also creates more tragic context for the swimming pool death. Imagine drowning in such enclosed shallow space. Imagine aging into incoherence. But remember these tragedies are flattened summary. What happens to an ice queen to make her freeze? What is she going to do about it? Addonizio is deliberately flip to both emphasize and undermine her own despair, but it’s worth remembering that you’ve still got a beating heart, a keen brain. You worry that you are running out of time, but dear reader, at the moment, you’ve got it.

What good is it? “It / turns out,” Addonizio continues,

words are no help.
But here I am with my shovel
digging like a fool
beside the spilth and splosh
of the ungirdled sea. I can’t stop.

Again the shovel, the water imagery, the insistent continuation. You are like that; you refuse to give up, even though you write despairingly. The narrator has moved from trying to turn the shovel into a poem to using it dig, searching, unearthing, probably making a huge fucking mess. She acknowledges the foolishness of this endeavour in her uncontrollable environment. I can’t tell from your letter if there are specific people you would like to romance or if it’s a specific kind of release you seek, but in any case, the process is messy, it’s unpredictable. I doubt very much that you were “horrible” when you kissed your one gentleman, but certainly that moment can be awkward, mismatched, initially clumsy. Can you find your way through to seeing the humour in such moments, to cringing, but using your shovel to dig toward a person, a situation that lets you feel comfortable and sexy and seen?

In your letter you sound as though, after the stress of your family life, you’re searching for connection that will allow you to preserve your heart and dignity. That is understandable, but impossible to guarantee. That you avoid it doesn’t make you Miss Havisham, it suggests a reasonable anxiety. Addonizio taps into a similar anxiety: “The horses are coming, the thieves. / I still haven’t found lasting love.” The horses that she invoked earlier now feel more threatening, are joined by thieves, but they’re still her own creation. I don’t mean to tell you that your worries are in your head as a way of dismissing them; after all, you have to live there. I only want to point out, so gently, that what’s in your head is made of stories, and you can seek out new ones (late bloomer Julia Child, perhaps, instead of a Regency romance heroine), write your own.

The line about not having found love might land self-pityingly, but Addonizio immediately follows it with lines of sweet longing: “I still want to hear viols / in the little beach hotel / that’s torn down and gone.” The “still” suggests stuckness, but in describing the viols in the hotel, Addonizio resurrects them in imagination. She turns nostalgia into texture for her art. She continues:

I want to see again the fish
schooling and glittering like a veil
where the waves shove
against the breakwater.

This time Addonizio invokes water imagery with a sense of wonder at its power, rather than its potential for death or chaos. Time may feel like it is flying by, the two-by-two of your friends may seem to signify that you are reaching some arbitrary best-by date, but you are an agent in your own story, both author and heroine. If you’re struggling against your icy element, no one’s romanced princess, can you try at imagining yourself a bold huntress or sexy librarian, all arcane knowledge and killer shoes? If the waves are shoving within you, can you look for the glittering fish? I want to impress on you Addonizio’s sense of optimism and determination against nature and death and uncertainty. You cannot retrieve the past, but that doesn’t deny you the ability to create a marvellous future.

Melting isn’t easy, dear reader, and it will take work. You’ll need your shovel, and the courage and self-possession to keep using it in spite of family drama and paired-off friends and everyone who feeds you the same flat stories about the kind of woman you are and what that means.

Addonizio finishes quietly, a remembered image of a girl, one could imagine even her young self, going forward into the cold:

Gone
is the girl in her white slip
testing the chill with one bare foot.
It’s too cold, but she goes in, so
carefully, oh.

Again, this is an image from the past, as “gone” indicates. You could link it with the images of drowning, but do you see the tenderness with which Addonizio writes the tentative but forbearing girl? The thin garment she describes her wearing, the careful testing of her cold path, the commas of pause, that final “oh”:—of worry, of relief, of wonder. She could have gone absolutely anywhere. I wish you this tenderness for your own chilly-reputationed self, and this confidence to go forth when the water is too cold. Wanting to change, to thaw, to pursue is brave and admirable. Pick up your shovel, dear reader, and go carefully in. 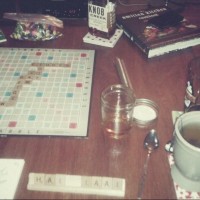