Malena Magnolia was sitting at a table with her best friend, Harley, waiting to pick up a pizza to go, when a stranger approached them. “This dude is talking to us and saying all this vulgar stuff,” Malena recalls. The two did their best to ignore him, but he was persistent, trying to provoke a response.

Harley remembers watching her best friend. She could sense Malena’s frustration boiling. Finally, Malena turned and looked the harasser square in the eye.

“This is not the way to talk to a woman,” she said.

The man looked confused. “I’m complimenting you,” he said.

Stories of Malena standing up to street harassment call to mind the poise and determination she channels into reclaiming public space for women through a rather surprising medium: street art.

Malena’s years-long path to becoming a graffiti artist was one of trial and error. While earning her BFA in painting and drawing at the Peck School of Arts at the University of Wisconsin-Milwaukee, college life rocked the Mormon beliefs with which she had been raised, and Malena found herself becoming increasingly invested in feminist politics. Her new political awareness and activism led her to question aspects of the art world, and she struggled to bridge her desire to make social change with the heavy load of coursework that kept her in classrooms and gallery shows.

“What sort of change is that going to make?” she found herself asking of her art. “Who is going to see this?”

After a series of rejections from art shows, she connected with Nicolas Lampert, who became a mentor figure. Lampert is a member of Justseeds, a geographically dispersed, politically minded printmaking cooperative, and his own work reflected his preoccupation with themes of social justice and environmental issues — interests shared by Malena. Lampert encouraged her to dig deeper than the aesthetically pleasing or self-expression aspects of art.

Despite her initial fear that bold political work might alienate viewers, Malena gradually began to discover a supportive community that rallied around the issues she cared about. She began to display her art in public places, hanging prints on electric poles and stenciling on buildings.

“Social justice has to be accessible,” Malena says. “When [art is] on the street, you have no idea who is going to see it. It’s accessible to all classes and races, and it’s not just in a gallery someone doesn’t think to go into.”

Malena’s philosophy about access also informs her choices of subject and medium. Although she is only two years out of college, her body of work has consciously featured people of all ages and sexualities and backgrounds, often incorporating styles generally used to display venerated religious figures or mythic presences imbued with power.

To create the signature style of stenciling she uses to tag buildings, Malena begins by harvesting dirt and clay from the ground. (She rejects spray paint because of its harsh effects on the environment.) When she arrives at a site to put up a stencil, she works quickly to hang the thin plastic sheets she has already cut her stencil into, using thick, black electrical tape to keep the sheets in place while she swipes mud into the openings with a damp sponge. Then she takes the stencil down and rolls it up for future use.

“Anyone can do it, which is why I love it,” she says. “It’s the most inexpensive process I’ve ever done in my life.”

“I still get an adrenaline rush,” Malena admits. “I like to do it as quickly as possible, photograph it, and get out of there.”

Over time, she has developed a network of friends to help her move in and out quickly, and she’s refined her process to maximize efficiency and precision.

She’s found that intricately patterned designs and portraits tend to receive the least amount of pushback, while slogans invite the most prickly responses. “If it has words like ‘Keep your rosaries off my ovaries’ or something, people want to know if you have permission,” Malena says.

She remembers one encounter with the police while she was putting up a stencil in Amsterdam: “We didn’t make it through the whole stencil and they made us wash it off.” Although she has found that the majority of people are curious about her work as opposed to hostile, she often wonders if it is her white and middle-class status that has kept her out of trouble with the police.

Now several years into her journey as a street artist, Malena has put up stencils in major cities across the United States and in Europe. Her interest in bringing the mundane and spiritual themes into conversation with feminist politics is deeply rooted in her own religious background. Growing up in the Mormon faith with a father who was had obtained the priesthood — a position of authority and privilege available only to men — Malena has become increasingly aware of the gender politics at work.

“I’ve had more intense spiritual experiences not being in a religion,” Malena says.

One such experience unfolded after her graduation from college. Her seemingly random decision to take a screen-printing job at a small t-shirt company in Charlottesville, Virginia meant that she was in town when the controversy unfolded following the infamous Rolling Stone article about sexual assault on college campuses. It ignited an intense discussion around sexual assault, and briefly brought protest culture into the mainstream student body of University of Virginia’s sleepy conservative Southern campus.

Malena felt compelled to take an active role. Alongside trained advocates from Charlottesville’s Sexual Assault Resource Agency (SARA), she helped to facilitate two Safe Space community conversations held at The Bridge Progressive Arts Initiative, a non-profit that uses art to inspire dialogue. The two sessions, collectively called “No More Violence,” gave community members an outlet for discussion and taught them how to use Malena’s techniques as a potential creative outlet.

During the Saturday night session, two group home guardians brought along the ten foster girls they watched over. Still in their early teens, many of the girls had already experienced sexual violence firsthand. The group came with many questions and participated in the lively discussion, but Malena particularly remembers one girl who was quiet throughout.

“She was so tough-looking . . . she looked angry,” Malena recalls. Despite her silence throughout the conversation, the workshop portion of the event helped draw out her thoughts. “She went crazy making the mud stencils! She was drawing all these things, slogans like ‘We’re here for you’ and ‘You don’t have to say yes.’”

The experience solidified Malena’s deeply held belief that many people need such creative outlets in order to live holistically healthy lives. Watching a diverse cross-section of the Charlottesville community connect and express the shared pain of sexual violence, Malena knew she had found her place.

“I need to do this work and interact with people around these issues,” she says. “It doesn’t feel like an option.”

Malena has also personally felt the impact of sexual violence. She was fourteen years old when her father was incarcerated for molesting three minors. She later learned that the history of sexual violence ran deep on her father’s side of the family, and that she had been molested by her uncle when she was a baby.

Though the revelation was disturbing, “it made a lot of sense,” says Malena. The vague sense of guilt and sexual thoughts that had troubled her as a child snapped into a new context. She went to therapy during her college years, which were formative in her creative and political life as well.

Beyond the national conversation about campus sexual assault, Charlottesville seemed to need Malena in other ways, too. She has experienced the most pushback against street art there due to the steady stream of tourists who come to experience the history of Thomas Jefferson.

“I think that pushback against modern ideas and aesthetic ideas [exists] in that city because they don’t want to to distract from the history,” Malena said.

At UVa and throughout the Charlottesville and Albemarle County area, many residents are invested in preserving an image of history that lionizes Jefferson’s contributions to modern political thought. But this narrative, which many feel sanitizes Jefferson’s history as a slave owner, has been challenged by historians and others who call attention to Jefferson’s keeping of slaves and the disturbing power dynamics of his sexual relationship with Sally Hemings.

The relationship between history, healing, and time is what ties together Malena’s complex perspective on art and life. In her quest to challenge the longstanding history of sexual violence against women through the healing power of dialogue and creative expression, Malena has pureposefully designed her street art to be ephemeral.

“Knowing that things are not going to be in the world forever is healing in itself,” she says.

In her twenties, she explains, she wrote a letter to her father “to cut things off with him,” but she didn’t send it. A year later, she finally put it in the mail, together with a new letter describing how her perspective had shifted over the months. It was an important personal moment in which she seized the opportunity to understand herself as a dynamic being rather than someone trapped by her past. Just as Malena’s mud stencils change and fade as they are exposed to the elements, she believes that even the deepest pain can fluidly evolve, eventually becoming less permanent.

Above all, her motivation to make art comes from deep within. “Being an artist picks you,” she says. 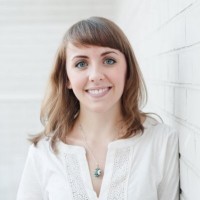 Michelle Delgado is a freelance writer based in Virginia. You can look her up on Twitter @delgadia2015. If you’re looking for her in person, the ice cream aisle at the grocery store is a good place to start.