The Things You Do for Family: Why I Go By ‘Mother Megan’

It’s a perennial question—whenever I meet someone new, be it at a bar or at church coffee hour, the question arises with a renewed intensity. The questioner grasps my hand, peers into my eyes, and sweetly asks: “But what do we call you?” It is one of those unique queries reserved for female clergy—right up there with “Where do you find decent-fitting clergy shirts?” and “Do you have to have a horrible haircut?”

The handful of women in seminary would cluster around after class and have intense conversations about how we would deal with these sorts of questions. As women’s ordination is still a comparatively new phenomenon in my corner of Christianity, we didn’t have a road map for this life. All the questions, all the customs that had been set down by male priests centuries ago had to be answered all over again, daily, by us.

Charged up with the hubris of the never-been-tested, I announced to my first parish that I would go by the title of “Reverend.” This, I felt sure, was a good name for me: Reverend Megan! Clean, no chance of confusing me with that Reverend Mother nun who smacked your knuckles in grade school, and if you squinted, you could even ignore the fact that it was grammatically incorrect. Perfection.

The problem was, I worked with an older priest who kept forgetting. He went by the old standby, Father Chad, and in public he would introduce me as “the Curate—though who knows what that means. Sounds like some sort of ham product, right?” We would stand side-by-side after the service, shaking hands as parishioners exited. They’d shake his hand (“We still on for lunch, Father Chad?”), then turn to me (“Great sermon again, Megan”), and I’d feel a nagging sense of unease, that feeling of hearing an inside joke no one’s explained to you. I didn’t stay there long.

In my next gig, I was a college chaplain out west. In Arizona, rules are not for following—rules are for scoffing at as you ride by on your lonesome journey. The local tradition was to term all priests “Priest [insert name here],” which I found unobjectionable, though a tad too functional and on-the-nose (it made me sound rather like a listing in a catalog: “Priest, seen here in several varieties!”). It was gender-neutral, and avoided the double standard that had crept in during my previous assignment.

I had one parishioner, however, who rebelled. Simon just would not do it. “I’m sorry,” he said, “I call priests ‘Mother’ and ‘Father.’ That’s what I do, and that’s because you’ve earned it.”

I hated it. Simon was easily old enough to be a grandparent, well-respected in the community, and active in the church. I had no desire to be his mother. Actually, I had no desire to be anyone’s mother. I wanted to be the young, fun, hip priest. I didn’t want to be mistaken for the Mother Abbess in The Sound of Music. Plenty of people already assumed I was a nun, which got awkward in a hurry.

More to the point, I wasn’t convinced I could pull it off. Most of my parishioners were older than me—the sting of being introduced to a slight older woman, only to have her respond, “Oh, you’re just a baby! You can’t possibly be a real priest!” was a daily occurrence for me. Who was I to claim a title that accorded that sort of intimate power when I couldn’t even convince people my degree was valid? I was familiar with the clergy who had set themselves up as lords of their own tiny universes: gobbling up all the air in the room, egos inflating each time someone agreed with their pronouncements. I didn’t want any part of that; I wanted to stay at a nice, safe distance from authority, and all possible abuses therein.

In all those conversations back in seminary, no one wanted to be a “Mother.” To be a mother was nothing near the strength inherent in “Father,” my classmates argued—it was a second-place substitute. “Mother” brought up conflicted feelings about your relationship with your actual mom, and worse—it led to unrealistic projections and expectations. It meant you had to be warm and fuzzy and nurturing and probably hang out with babies, the argument went. Let’s be good feminists, we agreed—let’s use gender-neutral titles only. Let’s stay at an safe distance, and never be confused with ego-inflating monsters!

Seminary itself had enabled this conclusion. When my female classmates and I learned to chant the liturgy, we were told to sing an octave lower, so the men in the congregation could follow along. When I led my first practice Mass, I was chided for wearing my grandmother’s pink sapphire ring and wearing my hair loose (“these are inappropriate distractions at the altar”). The only shoes allowed for serving in the chapel were soft-soled, shapeless and black—worn underneath vestments that (as we were taught early on) were modeled after the clothing of Roman noblemen. The black shirts worn with the clerical collar were shapeless, and seemed interchangeable with a garbage bag. When I pointed this out, the salesman stared at me. “They need to protect your dignity. You can’t have them fitted, now can you?” Gender-neutral was the best a girl could hope for, it seemed–because to be female was apparently a threat to the dignity and the authority of this 2,000-year-old institution in which we had fought so hard to be included.

On one group trip to California for a conference, everything possible had gone wrong. After a frantic day spent sprinting through airports and arguing with the TSA, I was beyond thankful to finally sit down around midnight in the hotel bar with my fellow chaplains and pour myself a glass of wine. Then, suddenly, I noticed three of my kids appear and stand silently watching, like a line-up of hopeful, scheming kittens. At once, they burst into a Greek chorus of requests: “Megan, we saw this bird get attacked in the quad!” “We think it’s a pigeon or swallow or something. Do swallows have grey heads?” “We named it Davy, but a big crow pecked at it and we think it’s dead.” “We need to bury it and you need to say a funeral Mass for it.” “Right now!”

I looked at my wine, and I looked at the students. With a little sigh, I got up, found my stole—the scarf that signals my ordination—and trudged after them into the night. Their chatter surrounded me as I wondered how I had gotten to this place in my life, and more specifically, what the heck one says in a funeral Mass for a bird. This was not covered in those discussions back in seminary. This was probably another stab to the heart of the dignified priesthood. (Know who probably never said a funeral for a dead bird? George Herbert.)

We found Davy, who had indeed succumbed to his injuries, and I donned my stole. I spread out my hands, and asked everyone to pray, still wondering what I was going to say. I talked about how God had created all creatures, how our delight in their diversity was something to treasure.

As I talked, I looked at my students, standing in the moonlight. Hands clasped, eyes closed, crowded together. So small and young in a world that would as soon crush them as not. My throat closed up with tears.

“So,” I concluded, making a cross over where the bird lay, “we give Davy back to the God who created him, confident in God’s love for all of us, no matter what. Even the tiniest of birds.”

I looked at my kids. The girl with the boyfriend deployed to Afghanistan. The boy with learning disabilities. The girl in an abusive home. The boy struggling with his sexuality. Me, in my high heels, jeans and collar, praying in the dark.

We turned to go back to the hotel, and one of the girls put her arms around me quietly. “Thanks, Megan,” she said, “I knew you were the right one to ask.”

I hugged her back. “My pleasure.”

These are the things you do for family—tell the stories, worry until your stomach hurts, protect your kids, bury a bird in the middle of the night. There is a moving power in this kind of adoption; in being claimed by a new family of no select bloodline; in being welcomed just because of everything you are. That power rests in bringing everything you have to the table.

As if God wanted priests who were girls and kicked ass, and loved their people dearly, all at the same time.

When I took my current job, the priest in charge emailed me to ask what I wanted to be called. “I go by Father,” he wrote, “but it’s entirely up to you.”

I wrote back without hesitation: “I’m Mother Megan.”

The uninitiated still occasionally assume I’m a nun. I still haven’t quite figured out what abbreviation “Mother” takes, if “Father” shortens to “Fr.” I don’t know if I’m selling out the sisterhood, or how Gloria Steinem would feel about my choice. Last year, the clergy of Connecticut discussed doing away with gendered titles altogether, but for now the issue is not going away.

This Sunday morning, I will arrive at work again. I will wake up the man sleeping on my front steps, and ask him how his night went. I will hold the door open for the woman zipping in on her scooter, who brings me flowers in her old pill bottles. I will lament the trials of high school with a South Sudanese teenager, and solemnly promise a five-year-old that I will buy lots of brownies at her lemonade stand. And I will do it all with my long hair, my soprano voice, and my red pumps.

Because that is what you do for family. 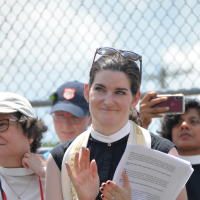 Megan Castellan lives and works in Kansas City, MO. She is a priest, a writer, and a wearer of really great shoes.