It was 1,000 degrees exactly outside and I was a sweaty mess in high heels by the time I arrived at the private club on the Upper East Side of Manhattan where Duran Duran was doing interviews. I had wanted to talk to the band since I started my professional career, but dripping sweat and swelling out of my shoes was not exactly how I had envisioned my first interaction with them. (Pretty sure I had pictured something involving riding in on a white tiger.) But when it came to standing in the same room as John Taylor, Simon Le Bon, Nick Rhodes, and sure why not, even Roger Taylor, I would take what I could get.

I was greeted by the publicist and ushered into a room to wait, which is just part of the glamorous life of journalists on a press day. The room, a study technically, was stunning, lined with dark wood bookcases teeming with books, there was a plush rug under matching leather ottomans, enormous bouquets of fresh flowers, and even a few trophies of indeterminate origin. The phrase “well appointed” popped into my head.

I sat primly in one of the leather armchairs and attempted to dab the sweat off myself daintily while I waited for my appointment with the men whose interviews I had studied in Tiger Beat magazine in the aisles of the convenience store near my childhood home. (Including one interview where John Taylor inexplicably “bit into a tomato like it was an apple,” an act so revolting, it almost dampened my years-long crush on him.) I was ardently willing myself into a state of physical and emotional coolness when a gentleman in a white linen suit stepped into the room like he had just stepped off the prow of a boat sailing through the waters of Rio while bikini clad models rolled around the ship like cargo. It was Simon Le Bon, of course.

Now of a certain age, he is still trim and tanned with perfectly tousled blonde hair and an air of OMGTHAT’S SIMON LE BON about him. He neatly pulled up the legs of his trousers before he took a seat on the couch to make sure his pants didn’t wrinkle. He said hello and carefully appraised the room while I pretended I was too cool to gawk by gawking sideways instead. “This reminds me of the Fifth Avenue apartment in The Goldfinch,” said Simon Le Bon, to me. “Have you read it?”

Why yes I had. Specifically, I had read it in miniscule type on my iPhone while waiting for the subway, sweating at the gym, standing in line at the Duane Reade, sitting at my desk while I was supposed to be working, lying in bed when I was supposed to be sleeping. I read all 7000 approximate pages of The Goldfinch in the hopes that someday Simon Le Bon would ask me if I had read it and I would be able to say: YES, I have read that book. Yes, yes, yes, let’s talk about The Goldfinch, Simon Le Bon.

“Oh, I see what you mean, Simon Le Bon,” I said trying to play it cool, like my book club was filled with attractive, well read ‘80s rock stars and not overworked lawyers who insisted on pretending to have read the book even though we all knew the truth. “I really did picture the apartment like this,” said Simon Le Bon, gazing around the room with a critical eye. “Perhaps a bit larger, though.” I nodded my head in agreement in a gesture that I hoped looked something akin to “sagely”.

“Did you enjoy the book?” I asked (suavely, I assume, if the illusion can continue). “I did,” said Simon Le Bon. “It was such a long book that I was daunted at first, but just sailed through it. She really knows how to tell a story.”

I agreed, taking a deep breathe before adding what I hoped was a coherent assessment of how unfair I thought the criticism of her writing style was. Simon Le Bon hadn’t read the Vanity Fair article that critiqued her writing, but was equally aghast at its conclusion. “If she can tell a good, compelling story, I don’t care if she uses simple language or expected phrases,” I said. Simon Le Bon agreed that a good story was a good story, end of story. Then he looked at me conspiratorially, adding, “Although I enjoyed The Secret History a little more.” Since I will happily take part in any of Simon Le Bon’s conspiracy theories (even if it turns out he’s a Berenstain Bears truther, I’m in. Bring it, Le Bon), I nodded eagerly to my new favorite literary critic. “Of course,” I agreed, adding, “And it was definitely better than The Little Friend.”

“Certainly,” said Simon Le Bon. “That was one of her weaker efforts. Although it was still a good read. I look forward to reading whatever she does next.”

With that casual dismissal, he stood up, smoothed his white linen suit, and looked around the room one more time, still seemingly awestruck at having walked into the set of The Goldfinch. He shook my hand and excused himself to get ready for his next on-camera interview.

As he walked off down the long gilded hallway, I had one thought: I am never joining another book club.

*As I was too ridiculously gobsmacked during this entire series of events to remember to turn on my recorder, the exact wording of Simon Le Bon’s opinions on Donna Tartt’s body of work is lost to the winds of time, but the gist of it remains permanently embedded on my body and I am never showering again.

Illustrator: J. Longo is a freelance Illustrator & Storyboard Artist in Brooklyn, NY. His work can be seen at JLongoArt.com and Instagram. 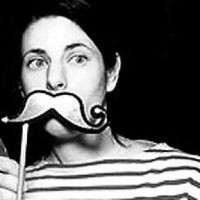 Melissa Locker is a freelance writer and a permanent Duran Duran fan. You can’t follow her in real life, but you can follow her on Twitter @woolyknickers.