Today I’m sharing recipes for two types of pumpkin donuts! Pumpkin spice flavor is warm and subtle, and I prefer it in breads, cookies, muffins, cake donuts — anything kind of warm and bread-y. Pumpkin is also only seasonal for a few months, so I try to take advantage of people’s willingness to eat anything pumpkin during the fall. I’ve been working with spice ratios and textures, and these recipes are what I’ve worked out so far.

(I recently watched almost all of The Great British Bake Off and was amazed and infuriated by the “American Pie” challenge in Season 3, where everyone talked about how much they hate American desserts, especially pumpkin pie. It was straight up the meanest anyone on that show has ever been. Sweet desserts, pumpkin spice, and simple flavors are great and when I somehow get on Great British Bake Off despite being an American, I’ll show them all.)

My usual photographer was busy with a move while I worked on these recipes, so my parents stepped in to help — which means that I deleted a lot more pictures of myself saying “Please focus” and pictures of my dog playing with a toy. Also I scrolled back in the camera and found a lot of pictures of various appliances around the house (?).

I’m offering two recipes today, one easy and one a little bit more complicated, so you can choose to either kill a whole afternoon baking or whip up a quick dessert/snack!

These are really more like mini donut muffins; they are baked, which makes them a lot easier to make than fried donuts. They are shaped like muffins, but have the lightness/fluffiness/coating of a donut. I like them because they’re quick, delicious, keep for a few days, and are extremely satisfying to make. I also make these using a mini muffin pan, so you can easily eat, say, one to five at a time.

Since this is such a wet dough, it’s also preferable to mix by hand, using a wooden spoon, instead of using a stand or electric mixer.

Leave your eggs out for a while to get to room temperature. Preheat your oven to 350 degrees.

Mix dry ingredients separately. The spice amounts here are suggestions based off what I prefer in a pumpkin-flavored dessert (CINNAMON) — if there’s a spice you want more prominently featured, or if you hate ginger or something, feel free to adjust! Be careful with adding cloves, though, unless you really love for things to taste like soap.

Mix wet ingredients (butter, pumpkin, and vanilla) with sugar (preferably by hand, using a wooden spoon) until you get most of the lumps out and have a generally smooth consistency. Add eggs! If you must use a stand mixer, add eggs while the mixer runs on slow. If mixing by hand, you can just mix for 30-60 seconds between each egg.

Add wet ingredients to dry. Mix until just consistent, slowly, stopping as soon as everything is incorporated.

Spray muffin tins with cooking spray or rub tins with oil or butter with a paper towel.

Using two spoons (one to scoop, one to scrape the batter out of the first), pour batter into mini muffin tins. Make sure each muffin has the same amount of batter, and fill each so it’s a little beneath the top of the muffin tins. Wipe off excess batter you spilled on the tins so it doesn’t burn to it! (It takes me a very long time to clean anything.)

Bake for 12-14 minutes, longer if using full-size muffin tin (15-20 minutes for those, but keep an eye on them). A toothpick should come out clean, and you can lift one out of the tin a little bit to see if it’s browned. The top should also be crisped.

While these bake, make your glazes! Both are super easy. For the apple cider glaze, just mix the powdered sugar and apple cider. For the cinnamon/sugar glaze, melt butter and have it next to your bowl of cinnamon sugar.

Take muffins out of the oven and leave to cool for a few minutes before overturning onto a cooling rack or some paper towels. If you oiled/greased the pans, they should come out no problem. Glaze your donut muffins. For the cinnamon/sugar coating, dip or roll in the melted butter (depending on how much of it you want coated) and then toss in the cinnamon sugar. For the apple cider glaze, either dip in the glaze or use a spoon to drizzle over. As I glazed these, my dad took pictures while my mom read to us from the Haim Wikipedia page, totally unprompted.

These will keep for a few days at room temperature in a Ziploc or covered in tin foil. I got great responses from coworkers, even though I offered them up by saying “I need to get rid of these!”

Now for the more difficult recipe!

Real donuts! Well, real cake donuts. These aren’t quite as tricky as yeast donuts, which can be extremely temperamental and therefore represent a mountain I have not yet conquered. But these fried cake donuts still take more effort and planning than the donut muffins, so budget a whole afternoon to make these. They’re warm, a little crispy, and flavored really nicely. It’s difficult to watch TV while you fry donuts, so I recommend picking a podcast or album you want to listen to — perhaps the Hamilton cast recording, the Hamilton cypher at the BET Hip-Hop Awards, any podcast or playlist featuring Hamilton, etc.

Leave out your eggs and butter to get them to room temperature.

Cream butter and sugar! If using a stand mixer, beat on medium for several minutes. If mixing by hand, beat butter and sugar as long as your arm can stand it (probably a few minutes longer). Then mix in eggs one and a time, making sure each egg is fully incorporated. Measure out buttermilk and pumpkin mixture, mix together. Very slowly pour into the bowl, mixing continuously.

Fold in dry ingredients until just incorporated. Overmixing can make things tough and dry! I know there are scientific reasons for this but I forget all of them and my brain can only hold so much info. I’m already barely holding onto all the lyrics to “Satisfied.”

Cover baking sheet with parchment paper and flour. Pour out dough onto baking sheet. Sprinkle a little bit more flour on top. Push on dough until it’s evenly distributed across sheet. You can do this directly with your hands or between two layers of wax paper. Put in the freezer for about a half hour. (As you make your doughnuts, the dough may warm up and be difficult to work with — you can keep putting them back into the freezer, briefly, if needed.)

Heat oil. This is very easy in a deep fryer, more difficult to deal with in a pan. You want your oil at 350 degrees. If you’re using a deep fryer, just set the temperature. The first time I made donuts it was on Father’s Day so my dad could finally use the deep fryer he got on sale at Costco. If using a pan, just be sure to use a deep one, and put in several inches of oil. Heat on medium — but you can adjust heat up or down slightly if the oil doesn’t seem to be heating or is heating too fast. I clipped a candy thermometer to the side of the pan. (If you’re using a pan, the temperature regulation is going to be THE WORST. You just have to keep lowering and raising the temperature to keep it around 350. Take a break between batches if you need to.)

Cut out your donuts. To make round donuts I used two different sizes of cookie cutter. Sometimes I like to just use a tiny circle and make only donut holes.

Using tongs, put donuts in the oil. Fry for roughly 75 seconds (45 seconds on the first side, 30 on the second), until golden but not too brown. It’s fine if you want to fry these for longer, but they will have an extremely crispy outside, which isn’t everyone’s bag. Use tongs to flip the donuts and take them out.

Toss in cinnamon sugar or maple glaze. Put on a plate layered with paper towels.

These absolutely do not keep at all, so only make them when you’re expecting guests or are planning on eating 30 donuts in one day (in which case I support you fully!!). I personally made these and ate about 10 of them; we are all just trying to live our lives.

I hope you make and enjoy at least one of these recipes! Let me know if you have any questions before or after. I promise these are both doable and totally worth it! 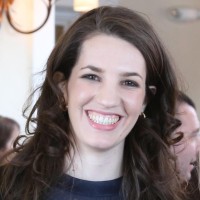