First With Truth: On Choice and the Misuse of Empathy

This piece was composed in October, but unfortunately, it’s become relevant to recent terrorism at a Colorado Springs Planned Parenthood. Pro-lifers who shoot up clinics truly believe they are killing a few people to save countless fetuses. To them, this is not hypocrisy at all, but an old ethics thought experiment about pushing a few people in front of a speeding train to save a bus full of schoolchildren. As a result, what feels like an obvious counter-point quickly stalls out in a dead end focus on unstable, irrational, and contradictory personalities. Instead, I’ve begun to see public violence much as I’ve come to understand intimate violence: as abuse of what the perpetrator may truly believe is compassionate behavior, a misuse of empathy. – K. Tait

Afterwards I understood that no matter what I wrote or felt about it, it ends up sounding like propaganda to someone. When I went into the Planned Parenthood at 8:00 AM there was just the one Jesus lady, but when I came out two hours later with the hormone blocker and the horse pill of an antibiotic fizzing away in my stomach, there were twenty men in black trench coats with their heads together, each one praying into what looked like rosary beads.

I might have been afraid if they were standing at the ready, that boogeyman you’re always supposed to be prepared for. But facing each other in tight circles of half a dozen each, touching at the foreheads, not even looking at me but down into their own prayers, it was as though they were one creature with no face at all, just a carousel of black and brown trench coats and wide backs and white necks. A ring of murmurs with no discernible identity. Here to pray for me.

The Jesus lady tried to follow me up the sidewalk begging me not to do what was already in progress, and an old woman on a bicycle struggled to part the sea of murmuring coat creatures and ride the same way I was walking. When Jesus lady wouldn’t leave I shouted “fuck off” and the woman on the bike smiled at me and said, “atta girl.”

My friends took me home and I thought about the woman on the bike.

There’s nothing I can say for myself that won’t sound, to someone, like I’m speaking in general.

That’s the problem with empathy. We think it’s an infinitely good force, a feeling of mirroring others emotions and circumstances that is always accurate, constructive, humbling, healing. Empathy can be the foundation of profound understanding, communication and connection despite differences, the central mechanic of any personal or character-driven story, real or fictional. If indifference maintains a callous and unjust status quo, to be moved to feel deeply or strongly for another must therefore be positive and constructive, and if not helpful than certainly not harmful.

Suddenly what amounts to mere good intentions cannot be refused or even criticized. In fact, however, there are important differences between feeling for another’s circumstances and functionally supporting their needs. There is a spectrum where solidarity with other’s struggles becomes appropriation and obfuscation of their particularities. There’s a way in which the intention to publicly declare just beliefs is effectively a performance of your own bleeding heart, so that everyone must give their own time and attention to understanding you’re one of the good ones.

There is such a thing as a harmful excess of empathy. Too much empathy is smothering, it’s codependency, it’s cooption. The sense of feeling what you imagine another must be feeling quickly warps into a sense of ownership over their narrative. The Jesus woman may indeed understand the fear and confusion and nausea of an unintended pregnancy, and it’s precisely her passion which drives her to follow me down the sidewalk dispensing pleas. Millions of people like her, feeling as she does, as they imagine I do, work very hard every day to prevent me from accessing and affording the comprehensive care that I require. Everybody empathizes with me so much right now that they truly believe whatever I say, whatever I want, whatever I feel, is for them.

Saturday I rest and catch up on my reading. Sunday morning I take the misoprostol, and I wait.

I’m reading science fiction, and a writer of science fiction, and so I’m thinking in terms of science fiction questions. How different would this be if we lay eggs? Could have puppies instead? Were only fertile for a narrow window of time much later in life? It’s tempting to take these premises and world build, write something imaginative that still reflects the mundane frustrations of all the many lukewarm and paternalistic systems and ideologies. But I know I’m not really that kind of a writer. It’ll come out as bad art and thin politics.

With the merciful help of Percocet, I pass the worst of the cramps late Sunday night and wake up Monday morning actually rested. Relieved. Optimistic. Not morning sick for the first time in weeks. No longer wanting to self destruct.

The bulk of the embryo must have slid down in my sleep, because when I step into the shower and relax, it slips out of me and plops into the tub. I watch the spiral of copper-brown blood in the few inches of water that always gather thanks to the clog of my room mate’s hair.

I look at it for a few moments. It’s mostly blood and goop, deflated, about the size of a small fruit, but it looks like a washed up jellyfish and it sits on the drain while the loose blood spirals around it and slowly dissipates in the hot water.

Well, there it is, I think. What all the fuss is about, there in my tub at 6:30 AM, Monday morning. I pick it up with my hands and toss it into the toilet, flush, clean the watery blood and remaining clots and blobs out of the shower and off the floor.

Here’s the thing: I’m not going to hand over the private things I felt in small and big doses in the middle of the night, or what I said to my lover. I don’t need to report on how it came to be or how I found out or when or why I decided to end it. I used to believe in a kind of “radical” over-share as personal resistance against taboos, but now I’m not so sure, because I know how my worth as a writer, my reputation as an outspoken person, will be the weight of my words in traumas revealed and struggles told, something familiar to every artist working from marginalization. I do not need you to “feel for” me. I will share these feelings instead:

I am grateful for that woman on the bike. Regardless of being an adult and not a child, a “they” and not a “she,” the intent of the “atta girl” was the reassurance of strangers I needed in that moment, against the murmuring mob.

I’m grateful for the care and attention from my friends and loves who’ve listened, driven, tended to me, fed me, checked in.

I’m furious there’s anywhere where it wouldn’t be this straightforward, self directed, supported.

But there’s nothing I can say that won’t get turned into a general statement. If I show you each private revelation, you, like a feeling person that you are, will mirror it and either find me “so brave” or “heartless.” I’m either fragile or heroic or monstrous. There’s no way to tell you that is merely factual. There’s no way to speak from, instead of about, my experience, when it comes to this, and things like this.

Everything gets gobbled up in empathy, that thing which makes a story work, which compels one to feel as though and act for another. So for the rest of the shower, I thought about science fiction, instead. I vowed never to write with a premise about laying eggs or having puppies, to mull too long on ideas about experiences instead of narratives from them. The problem with the Jesus lady is she feels too much for me. I bet she likes sympathetic set-ups and neat endings and messages in her stories, too.

One thing I want, after all this, is never to read another plot-device pregnancy, another symbolic birth, in any piece of fiction, ever again, if I can help it. The clinicians who checked that I was there because I wanted to be and the doctor who handed me my misoprostol may not have empathized with my particular experience at all, but they gave me what I needed without judgement or harassment. There may be a limit to understanding the other, and there may be real harm in speaking and acting otherwise. So I don’t want to read another metaphor or allegory about that which is so rarely just spoken of plainly, unremarkably, first of all with truth. 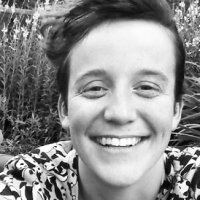 K. Tait Jarboe is a sound designer and writer of science fiction and critical essays. Details of their various projects can be found on their website. They're currently writing a text adventure game about abstract expressionism.