In the spring of 1978, I landed a job as a senior editor at Pocket Books, though I was hardly qualified for the position. The publisher at the time, Peter Mayer, was committed to hiring bright young people on the cheap. Though I’d never before acquired a book, I was now able to acquire not only hardcover reprints but also paperback originals. Flowers in the Attic was my first.

V.C. Andrews’ 98-page novel had been discovered by my closest friend, Humphrey M. Evans III, who was working for the literary agent Anita Diamant at the time. A child prodigy and an avant-garde composer, Humphrey had wandered into the publishing world via Maurice Girodias, founder of the legendary Olympia Press, which combined literary publishing (Lolita, Tropic of Cancer, The Ginger Man) with pornographic novels for GIs. The two of us had worked together at Maurice’s new venture, The Freeway Press, for a year until Maurice was evicted for non-payment of rent and the marshals came and ushered us from the office. We both got “real jobs,” Humphrey as Anita’s assistant, I as an assistant at Dell. I had been promoted to assistant editor there, editing all my boss’s paperback originals, until I was offered the job at Pocket Books for the princely sum of $12,500/year (a 40% raise).

It was August, and Humphrey and I were in the fetid, steaming subway on our way to CBGB’s to see Patti Smith when he described the novel to me. He had read it that day and saw something, as he put it, “awful and fabulous” in it. I stopped at his apartment on our way home from the concert to pick up the manuscript. I stayed up until 2 AM, reading it in one long gulp. Though it was late, I phoned him. “Humphrey, what is this? It’s some sort of brilliant. I’ve never read anything like it, and it seems so real! Do you think it’s real? I must have it.”

The very next day, I bought it from him: my first purchase at my new job, and his first sale as an agent. We hoped the novel might become a camp classic, and joked about marching in the Halloween Parade dressed as the evil grandmother.

In those days, an editor could simply show the project to the editor-in-chief and get permission to buy it, especially if the author wasn’t asking to pay a big advance. For world rights, I paid a mere $7,500 with a 6% royalty, reduced from the standard 8% (those were recessionary days and again, Pocket Books had a policy of being cheap).  Besides, the manuscript was only 98 pages, and clearly needed a lot of work.

I wrote Virginia a long editorial letter. A scant month later the manuscript returned, having ballooned to over 600 pages. I later learned that Virginia had shopped the manuscript around town many times – one agent who had worked with her a few years before told me that it had been rejected by 24 editors. Though I never spoke with Virginia about this, I imagine she had in her closet (or attic) many versions of the tale.

The late seventies was the heyday of the mass market paperback. The books were sold not only in bookstores but also drugstores, supermarkets, newsstands, and airports. Along with reprints of hardcovers, more and more of the monthly quota of titles  was being filled by novels published originally in paperback — usually category fiction: mysteries, westerns, detective stories, science fiction and  romances, both gothic and regency. Though in those days books were not yet referred to as “product,” that’s exactly what they were: cheap editions not meant to endure, not intended for review, often selling in the hundreds of thousands but utterly unknown to the sophisticated, literary reader.

It was mostly luck that made Flowers in the Attic a major publication for Pocket Books. While I was still working with Virginia on the novel, the company underwent a change of publisher, from the elegant, literary Peter Mayer to the scrappy, marketing-focused Ron Busch. The editor-in-chief left, along with two other editors, leaving a skeletal staff of two inexperienced editors, both under 30, and a publishing list sorely lacking in lead titles. We had one “Total Release” title each month, usually a reprint of a hardcover bestseller, that would get a big marketing push, complete with floor displays and advertising.

I saw an opening and grabbed it, talking up Flowers in the Attic and giving a copy of the final manuscript to anyone I could persuade to read it.  Soon the publicists, marketers, sub-rights and salespeople were reading and discussing the novel. Most shared my opinion. It was utterly original, compelling and disturbing. We needed a “Total Release” for November. Flowers was the best bet we had in our inventory.

The only concern came from the sales director. “I’m worried, Ann; the dialogue is so stiff.  People don’t really talk like that.”

“It doesn’t matter,” I told him. “It’s her style – it may be awful, but it is a style, and it will be read as original.” Little did he know how much I’d already modified that style. I still have my second editorial letter to Virginia: “I’ve frequently noted where you start sentences with adverbs or reverse the natural order of a sentence. It’s good to do this sometimes, but you do it too much, and it often makes for rather awkward reading.”

In the summer, we printed 2500 advance reading copies, something rarely done for a paperback original.  The plain grey cover had only the title and author, which gave it a somewhat clandestine appeal (it was inspired by Olympia Press’ Traveller’s Companion series).  The back cover featured the teaser:

Such wonderful children. Such a beautiful mother. Such a lovely house. Such endless terror!

Within a week of distributing the copies, they started reporting back that young women were fighting over the copies; at one bookstore there were five clerks waiting their turn to read it. This was starting to look like something big.

“You better get down there right away and meet her,” Ron told me. “Let’s hope she has a sequel.”

“Don’t eat the donuts,” my colleagues warned me (in the novel the children are given donuts covered with arsenic-laced powdered sugar)

On a bright September day I flew to Norfolk, Virginia, rented a car, and drove 45 minutes to Michael Lane in Portsmouth, a charmless, post-war suburban street with few trees. Virginia’s house was a plain, small brick ranch-style building, its windows unembellished by shutters. It sat on a small plot of browning grass; no bushes or flowers softened the entrance.

I was met at the door by a small, elderly woman, with a deeply lined face and short, bluish-white hair, recently permed.

“Virginia?” I said, smiling and holding out my hand.

“No, I’m Lillian, Virginia’s mother. We have a surprise for you,” she said, ushering me into the living room. “Now here’s Virginia.”

Virginia seemed to be the only thing in the sparsely furnished room. She reclined, straight as a board, on a wheelchair whose seat had been built up with pillows. As one reporter later put it, “If you imagine an ironing board angled atop a wheelchair, that’s what her position was.” She wore a frothy pink chiffon dress. Her blond hair was carefully coiffed around her pale, flawless skin, her atrophied legs capped by pink slippers. Her blue eyes were wary.

I tried to keep the shock from registering on my face as I moved forward and half knelt before her to take her hand in mine. “I’m so happy to meet you, Virginia, so happy.”

Lillian hovered behind Virginia, holding the handles of her wheelchair, which I would come to recognize as her habitual position. “We’ve been excited to have you,” she said.

“Here, sit down.” Her mother pulled a chair up so I faced Virginia, “I’m going to go get our refreshments.”

After the initial awkwardness of the meeting, Virginia became warm and animated.  She was an attractive woman, who looked much younger than her 53 years (it would only be at her death, 10 years later, that I learned her real age.) She looked unlike anyone I’d ever met before: like a doll, a Dresden Doll right out of her novel. But she was very present, and very intelligent, and no one’s fool. Because her spine and neck did not move at all, she rested at a 45-degree angle and I found myself talking to her chin. I moved my chair next to her, so I could meet her eyes as we spoke.

Soon Lillian returned with a tray of refreshments: coffee, milk and sugar, a pitcher of water covered with a white linen napkin, and a plate of powdered sugar donuts.  Virginia saw my startled expression. “I told mother we had to have them,” she said mischievously. I teased her that she was as wicked as the grandmother and we laughed about the tortures she liked to put her characters through. As we chatted, Lillian hovered behind Virginia’s chair.  At one point I asked her what she thought of the novel.  “Oh, I haven’t read it,” she said. How odd! How could she not want to read it?

“She’s afraid to read it,” Virginia said. Then she told her mother we needed to talk business and Lillian withdrew.

“What do you think about a sequel to Flowers?” I began.  “Problem is, we need to do it quickly, so it can come out a year from November when Flowers is published.”

We discussed the broad outlines of what it should be: a revenge story, underpinned by the unbreakable, impossible love between Cathy and Chris. Virginia had a wicked sense of humor, and we took turns throwing out plot ideas, devising new miseries for the children to face in the outside world — illness, suicide, obsessive love, sexual transgression, and madness. We were like two teenagers having a schadenfreude party. Virginia’s imagination was one part fairy tale, one part soap opera, with a chaser of Bette Davis. After two hours, we had the outline of the sequel, and a title: Petals on the Wind.

I told her the next time I came down, I’d bring Humphrey with me “I’ll have the first draft to you in October,” she assured me.  Then she smiled slyly. “But don’t tell Humphrey about the donuts.”

On the flight home, I couldn’t stop marvelling at Virginia.  She looked like a Dresden Doll and she was imprisoned in her wheelchair, completely at the mercy of her mother.  Was that seemingly sweet southern lady some sort of monster? How long had she been stuck in that wheelchair? I hadn’t asked the cause of her infirmity, nor had she volunteered any information about it.   But I now understood the uncanny power of the story. She was, in her own way, a flower in an attic. How many aspects of her novel were taken from real life,  I could only speculate, but as the years passed, and our friendship deepened and endured, I learned a great deal more about what inspired the story. 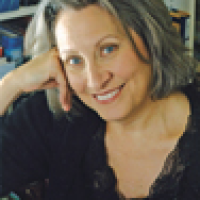 Ann Patty was the editor of all V. C. Andrews’ novels, up to and including Gates of Paradise. She is writing a memoir about her relationship with Virginia Andrews and her books.