Taylor Swift and My Mom

Taylor Swift’s “Twenty-Two” is maybe the blandest song to ever have been generated by a pop-country songwriting machine. For those who aren’t familiar, a copy can be found here. (For those who are unfamiliar and at work, it recounts the bland-but-accessible adventures of “ditch[ing] this whole scene” and “dreaming instead of sleeping.”) It’s a vanilla milkshake in song form, with a chorus of, “I don’t know about you, but I’m feeling 22,” backed by what I’m pretty sure are machine-generated righteous hand claps.

The song rose to prominence a few months before I turned 22 and graduated from college. At the same time, I was busy watching my mother die from the cancer that would eventually break her down past recognition, as cancer does.

In her truly excellent piece about High School Musical, Whitney Reynolds commented that her piece wasn’t “the cancer essay or the dead parent essay.” I can make no such claim. This is a dead parent essay with a thin veneer of pop music slapped on top.

The first time I heard Taylor Swift singing about the carefree fun of being 22 after I realized that my mother was really going to die, I punched the radio off. Like, actually hit my radio dial with some force. I regretted this later, since I drive a Civic and it’s not really built for punching.

“Fuck you,” I yelled at her, at the song, at the stupid top-40 radio station that was playing it. For good measure, I repeated it: “Fuck you, fuck you, fuck you.” Then, in the parking lot of the Tex-Mex restaurant nearest to what was still my parents’ house, I broke down and cried.

This was not the first time I had cried that week. That had happened in a grim hospital bathroom after talking with my mother. Hospital bathrooms are of course never not grim: they are built to accommodate the machinery that accompanies serious illness, and so the proportions are always just enough off to remind you that Someone You Love is Ill. Plus, the toilet paper is the worst.

A few months before, my mother had finished up with her chemo and gone through a 9-hour surgery. I skipped class for the first time in my college career in order to be there, and when we saw her finally come out of it, she was high enough on lingering anesthetic that she didn’t totally recognize my sister and me. Things got better, though, and in the weeks to come we had been tentatively hopeful. She was weak, but getting stronger. She had gone back to work.

There were no signs of cancer, and I looked as if she might be one of the infinitesimally small percentage of folks with her particular cancer to survive. (Do not Wikipedia your parent’s cancer. The page will include survival rates, and you will cry.)

Then she started coughing. Horribly. All the time. It was this cough that had landed her back in the hospital where I was crying in the bathroom. A few minutes earlier, my mother had – after supportively feigning interest in my summary of what I’d learned about the sexual habits of monkeys that day in class, because she was a good mom – told me that the doctors were pretty sure that her cancer had come back. She was too weak from the surgery for them to be able to treat her any further.

After confirming with her that this meant what I thought it did, I went to the bathroom. I stared at the wall and tried very, very hard not to cry. It didn’t work. After a moment, I got it together enough to come back out and keep talking to my mother before my next class.

My mother asked me if I was having digestive issues. I don’t think she realized that I hadn’t, until that moment, accepted that the cancer was going to be what killed her.

She had already known that it would. Before she was a cancer patient, she was a cancer nurse, and a remarkably pragmatic person besides. She had been working at the sausage factory behind cancer treatment while the rest of us had been hanging out grilling hot dogs. She had told us before the surgery that, realistically, the question wasn’t whether the cancer was going to kill her, it was when.

So, when I heard that stupid song in the parking lot where I was sitting with my burrito, I lost it. I cried all of the tears that I had wanted to cry in the hospital bathroom inside of the marginally more comfortable driver’s seat of my car. I was surprised–for the first of many times in the coming months – at just how much fluid a human body could produce, if it is really committed to doing so.

This is probably not the reaction that the producers of the song hoped to elicit.

The thing about the song – the perfect, beautiful, mass-produced song – is that it is perfectly calculated to trigger faintly positive emotions in 99% of the song-listening populace. It is a wholesome party girl anthem, devoid of intensity and rebellion. The video is clear: being 22 is about hanging out on the beach, eating weirdly demolished birthday cake and building code-obeying bonfires with one’s tall blonde friends. It’s about Fun! And Friends! And Pool Time With Lady Bros! (And possibly about casual sex, but it’s never totally possible to tell.)

Friends would ask how my mother was doing, and I would tell them a sanitized version of how bad it was to watch my mother drowning because of her failing lungs, and the conversation would – despite the best efforts of my wonderful friends – sort of peter out. It turns out that even the very best of your friends will eventually run out of responses to conversations which dead-end in you crying. I would have given anything to occupy Taylor Swift’s beautiful, bland, made-up musical world because I would have given anything to avoid making people uncomfortable all of the time.

Beneath the anger and car-punching, my reaction to that song was mostly about jealousy. Not about generally being Taylor Swift – I know my hair will never be that shiny – but about people for whom the song was feasibly relatable. In the midst of watching my mother die, I desperately wanted a life that could have slotted into the generic worldview of that three-minute slice of pop. No one around me was talking about cat ears and exes and bonfires – but I was just as disconnected from the actual discussions about books and booze and naps because in the back of my head was a tiny little voice chanting “momisgoingtodiemomisgoingtodie,” and later – when she was too sick to protect me from seeing how sick she was anymore – “momisdyingmomisdyingmomisdying.”

But I couldn’t fix any of that. So instead I developed intense fantasies of stealing Taylor Swift’s weird smashed birthday cake, and continued to bruise my hands on my car’s dash.

I know that eventually, the pointless anger towards Taylor Swift will fade, as will the rawness of the memories of the past few months. In a year or two, I’ll be able to add the song to some Spotify playlist, or nod along to it in the grocery story, and all that I’ll remember just how very glad I am that I’m not 22 anymore. 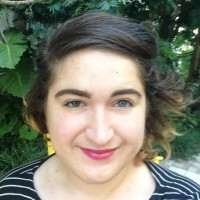 Emily Chapman works in tech support and has an anthropology degree–you know, the classic combination. Her work has appeared on Lifehacker, xoJane, and–now–The Toast. She has a blog and lives vicariously through tweets.