A Second Female Author Talks About Sexism and Self-Promotion

When Sarah Rees Brennan asked me to write a companion essay to her piece on the many issues women face in self-promotion, I had just returned from a trip to Austin, Texas, where I was promoting my most recent novel, Inheritance, at the Austin Teen Book Festival. I was about to leave for Wordstock, a book festival in Portland, Oregon, to continue this promotion. I began writing this essay in my friend’s house near Seattle, where I had just done a bookstore event, and was about to drive back to the Portland area for another book festival.

In Sarah’s essay, she wrote about the criticisms and flat-out threats that she and many other women writers receive, partly in reaction to their promotional efforts. I’ve been fortunate in that I haven’t received threats of violence, although I have been on the receiving end of various mean-spirited messages via social media outlets. Because of this, I’ve learned to avoid Googling myself, and I never read reviews of my books that haven’t been vetted by someone I trust. This is a self-defense mechanism, because frankly it hurts my feelings when someone attacks me and my books, and I’d like to avoid feeling bad about myself.

I can already hear someone on the internet saying, “What a wimp. Criticism is good for you and you should grow a thicker skin.”

I will freely admit that I’m a wimp when it comes to criticism. I have to save my ability to take it (and what a loaded phrase that is) for people who are criticizing my work with an eye to helping me improve it. My editors, agent, and critique partners give me plenty of feedback in time for me to shape my writing.

But I don’t believe that creative individuals should have to grow thicker skins. I believe that if you’re out there creating art, you should make sure you’re as open and thin-skinned as possible, so that you can feel every damn thing that arises in you. You need to be able to fully experience those emotions so you can use them in your work, but only within reason. I draw the line at letting mean-spirited criticism into my mental space.

The problem is, the more you put yourself out there, either via simply producing more novels or by promoting the ones you’ve already published, the more criticism is thrown at you, and the unending barrage can wear you down. It can feel like walking into an ice storm. No matter how good your cold weather gear is or how experienced you are at weathering the storm, you have to keep your eyes open so you can keep moving forward. It’s impossible to avoid every freezing barb of ice, and when it stings you in the eyes, you can’t help but wonder if it’s worth it.

I have to constantly remind myself that I’m putting myself out there for a reason; that I chose this; that I can always choose to turn away.

As Sarah pointed out, “The less successful and promoted-elsewhere you are, the more important social media is to you.” My publisher has been very supportive of me and my novels, which are all about queer girls, and I’m often reminded of how rare it is to have that publisher support since my books are not about the straight white male norm. But of course there’s always someone who’s getting more support, and I’m also fighting against the tide of the mainstream, which rarely pays much attention to people like me.

Nevertheless, there’s also always someone who’s getting less support, and who is even more marginalized. I think I’m riding in the middle of the pack right now, and because I believe in my books–I wouldn’t write them if I didn’t–I want to promote them to the best of my ability. I want to break out of that pack. Doesn’t every writer?

That’s why, in addition to all my traveling this fall, I blog a lot. I came out of a career in freelance writing, so I’m very familiar with turning out articles quickly. I used to be an academic, so I’m good with research. For the month of October on my website–LGBT History Month–I focused on LGBT YA, both to highlight an underrepresented minority and because this is what I write. Part of me is a former academic/journalism nerd who just wants to write analytical articles about a subject I’m interested in, but of course another part of me is an author of LGBT YA novels who hopes that people who read those articles will buy my books.

But I have to remember that despite these pitfalls, I’m actually living my dream. I am writing novels–about queer girls!–and they’re being published, and I’m being invited to book festivals and my blog posts are getting shared and readers come to my events and say, “Thank you for writing your books. They gave me hope.”

When I was at the Austin Teen Book Festival at the end of September, I was on a panel about young adult science fiction. I was excited about it because I wasn’t being ghettoized into an LGBT panel; the other panelists’ novels were all about straight people. However, I knew that I still had to out my books and by extension myself, because even if the packed room didn’t necessarily seem to have any queer women in it, I knew they were there. I wanted to speak up for them, to acknowledge that they–that we–exist, and that we belong in a mainstream panel, that we shouldn’t be marginalized.

Let me tell you: It was kind of a frightening experience. I live in the San Francisco Bay Area, and I’m completely out in my real life and online. Before I was a YA novelist, I was managing editor at AfterEllen, which is the world’s largest entertainment news site for lesbians and bisexual women. I am OUT. But in Texas, at that panel, for the first time in a long time I felt a weird pressure to stay silent.

Later on, a lesbian writer I know who attended the panel told me she too felt that the room had a bit of a hostile vibe. It wasn’t an overt thing at all–nobody said anything homophobic to me–but several people did tell me later, “You are brave for being so open about your sexuality.”

I’m going to guess that this is something straight writers don’t have to face: The belief that acknowledging who you are is a courageous thing to do. It is inordinately strange, and it strongly implies that you would be safer if you shut up about it.

At the end of the book festival there was a mass signing, in which every author who came was available to sign their books for readers. A woman who immediately set off my gaydar came to my table and asked me why I’d mentioned, during my panel, that Sarah Waters had inspired me. I told her it was because before I read Waters’ Tipping the Velvet, I had never encountered a novel about lesbians in which the lesbian characters had full lives–in which they could fall in love and wind up in a happy relationship rather than dead.

Leaning closer to me, the woman asked in a lowered voice, “Is this because you’re a lesbian?”

I was charmed by her question because I could tell she was gay, and she seemed to be whispering a secret to me through a keyhole. I smiled and said, “Yes. Yes, I’m a lesbian.”

She said, “Thank you so much for saying what you said at the panel. I never knew books like yours existed. I’m so glad you’re out.”

I told her, “You are the reason I came to this festival.”

And she was. No matter how disconcerting it is to be forced to come out over and over again, both in real life and online, no matter how frustrating it is to get homophobic messages or reviews, I have to remember that there are queer women out there sitting silent in the audience, or reading quietly online, who have never heard of my novels. Queer women who have never realized that they could read books about queer women who are allowed to fall in love and have happy, fulfilled lives.

This is what self-promotion is about for me: finding readers who want to read my books. My books are for them. I have to do everything I can to make that connection. 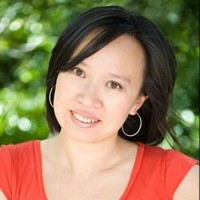 Malinda Lo is the author of several young adult novels including most recently the sci-fi duology Adaptation and Inheritance. Her first novel, Ash, a retelling of Cinderella with a lesbian twist, was a finalist for the William C. Morris YA Debut Award, the Andre Norton Award, and the Lambda Literary Award. Her novel Huntress was an ALA Best Book for Young Adults and a finalist for the Lambda Literary Award. Malinda is co-founder with Cindy Pon of Diversity in YA, a project that celebrates diversity in young adult books. Malinda lives in Northern California with her partner and their dog. Her website is www.malindalo.com.