How to Tell If You Are in a Muriel Spark Novel

Previously in this series: How to tell if you are in a Dashiell Hammett novel.

Your mentor has anointed one of her other favorite students to sleep with the art teacher, but you, despite your little “pig-like” eyes, sleep with him instead.

You believe you can make insomnia work to your advantage by deciding what to think about.

Are you actually the devil, or just an “arts man” hired by your company to conduct “human research” and curtail absenteeism? Unclear!

The voices you hear when you sit down to write lead you to believe that you’re a character in the novel you’re writing even though metafiction hasn’t been invented yet.

You identify communist intellectuals from the variety of dyspepsia remedies on the bathroom shelf.

Such bad luck! You killed the nanny instead of your wife and have had to spend most of your life in hiding.

Some nights you supplement your income as housekeeper by lifting your skirt to show the spot where your stockings meet the tips of your garters.

Blocked on your novel, you become obsessed with exposing your new student — a 17-year-old prodigy whose unfinished first book is already the talk of publishing — as a fraud.

Your idea of a diet is to eat half the size of a normal meal, and then, if you are feeling perfectionistic, half of that again.You will be found tomorrow morning dead from multiple stab wounds, your wrists bound with a silk scarf and your ankles bound with a man’s necktie.

When your wife is accused of terrorism, you hold forth in press conferences on “the question of Job” and suffering and other fine points of your scholarship.

For anyone wishing to concentrate deeply on a writing project, you suggest acquiring a cat.

At least your fraud trial provides a distraction from your plans for your girlfriend, who refuses to have an abortion.

Lending your lovely Schiaparelli dress to the less fortunate girls who live in your boarding house has unfortunate consequences.Even hobbling arthritically around your former lover’s funeral, doubled over two crutches, you are by far the most magnetic presence in the room.

Faced with a bloviating male writer, a urinator of prose, you can’t stop yourself from hissing “Pisseur de copie!”

One of the many indignities to which you routinely and stoically submit is being referred to as part of a “baker’s dozen” when there are in fact only twelve of you. 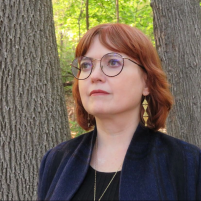 Maud Newton is writing a book about the science and superstition of ancestry.