“I Do Not Know What My Gender Is”: On Messy Transitions

“But when I met you, you were such a girly girl.”

My stepmom leaned across the dining room table and told me this urgently, as if she was offering up incontrovertible evidence that I couldn’t possibly be transgender.

It was a fair enough assertion. From the moment I was born – the first girl in a close-knit family of male cousins – I effortlessly fell into the preformed mold of femininity: I grew up in a bedroom with pink carpet and a four-poster lace canopy bed; I loved dresses and Barbies; my favorite game to play with my brother and cousins was house; by the time I was in fifth grade I had an absurd amount of make up, and the sleepovers I hosted always involved a make over. I can say that all of this was authentically me; but that is not what I told my stepmother.

As a gender-different person growing up in the arms of Livejournal comment threads, I learned pretty quick that when talking to cisgender people – parents, friends, therapists – you sometimes have to bend the truth to be taken seriously. I vividly remember sitting on the lumpy sofa in my therapist’s dark office as a senior in high school, telling her brokenly that I had felt trapped in the wrong body for as long as I could remember. Constricted by the DSM and the WPATH Standards of Care, most healthcare providers (especially in my conservative hometown) look for a particular checklist of experiences and feelings before diagnosing a person with gender dysphoria. I knew, before walking into that office for the first time, that I didn’t meet the majority of the criteria for the diagnosis but I also knew – yes, at the age of eighteen – that transitioning to male would make me happier. I could not and cannot explain how: my gender identity has always been an amorphous and unstable mystery. As of this writing I feel closest to what I would call masculine agender (that is, I don’t identify with any gender, but I feel more masculine than feminine.) A few weeks ago I was adamantly identifying as a man with a transgender medical history, and several months before that I embraced my genderqueerness.

Unfortunately, because our healthcare providers are the gatekeepers to transition, those of us who do not fall neatly into the boxes of the diagnostic checklist have two choices: prepare for an uphill battle or become storytellers. I learned all the key words and phrases that I needed to drop into my initial therapy visits, the stories I needed to concoct that would convince my therapist to write that all-powerful letter instructing my physician to prescribe hormones. I told my therapist an out-and-out lie (which I don’t endorse!) because I did not have the words for myself, much less for her, to explain why the prospect of living as a man felt right to me. Telling my truths, I feel sure, would have found me ten years down the road still trying to explain to a therapist that no, I am not a female-to-male transgender person but yes, I need to medically transition to male to be able to live my life.

There was some understanding in my mind that I was not after life as a man, whatever that means. I have been medically transitioning for over four years and I am still not read as male. One look at me and people either start excessively dropping the “ma’am” bomb or asking how old I am (as if I’m twelve rather than my twenty-three years.) I tell baristas to call me ‘Jim’ because I have gotten back one too many coffee cups with ‘Jane’ scrawled on the side. Last month a nurse, processing me for some blood work, paused in her data input and said, “I’m sorry, but I have to ask: male or female?” Holding my wife’s hand in public means running the risk of passersby making loud comments about lesbians. Kids stare and sometimes ask the question their parents are all thinking: is that a boy or a girl?

It does not bother me. (Any embarrassment I feel is, I think, a manifestation of what I’ve been told I should feel.) I did not embark on this ludicrous journey to become one of the guys. I still cling to my more feminine mannerisms enough that more than one person has made assumptions about my sexuality. I’ve started growing my hair out – much to the chagrin of relatives who would like to see me able to pass as male even a little – and mentioned to my wife yesterday that I miss wearing headbands. Almost all of my friends are women because I relate to them, not to mention most men are too crass for my tastes. I very much enjoy the label of husband but my wife and I share the pants in our relationship. (Or perhaps there are no pants.)

I do not know what my gender is. I do not know how to explain it, even to myself. And yet, mired in uncertainty, I made the decision in 2010 to start bimonthly self-administered testosterone injections, undergo a double mastectomy, and sit before a judge in an empty courtroom in order to change the name and gender on all of my legal documents. Frankly, I would be amazed if, after reading to this point, not a single person thought me nuts or at least wondered if I might have some regrets.

I do not, not about this. My transition was just another milestone, like getting my driver’s license or graduating high school: a tedious but necessary obstacle that opened up my future. I frequently daydreamed of my future as a kid and while I certainly never pictured this, as I made my way through high school the path to transition just naturally opened in front of me. I don’t really see my coming out and transition as a Big Deal, but I know that it must have been to everyone else in my life. How does a child who was perfectly content as a girl grow up to be a man? Even those who are familiar with transgender people know that there is some amount of internal struggle that leads to transition. Some sort of sign that this had been there all along.

On this one point, I agree with my stepmom. I had been a girly girl, and happily so. I can only assume that I could have continued on and maintained some level of contentment with my life. There isn’t an easy way to explain why I transitioned or to describe my gut feeling that it had to be done. I’ve only begun to come close to understanding my gender identity by expanding my understanding of gender: that is, by accepting that gender is not a binary. When I transitioned, I think some part of me did so because I thought my options were either male or female, and I have a stronger pull towards male. I know now that although I use male pronouns and check the ‘M’ on forms, I am not necessarily a man. At least, that’s not how I identify today.

I’ve begun to notice posts circulating online by people with similar gender experiences. They tend to run in the vein of “it is okay that you feel this way; your gender identity is valid.” Words of reassurance that I could have used five years ago. I have never been completely honest about my identity for fear of retribution: would my transition be delegitimized and seen as an act of extreme self-mutilation? Would my parents seek legal action against any healthcare provider who had “enabled” me? Would I be committed to some institution?

The fear is real. Even in the trans community the traditional trans narrative tends to be held up as sacrosanct, and those who challenge it are ostracized for somehow polluting the reputation of normal trans people, people who have always known, people who will transition to fill the appropriate gender roles, people who feel alienated from their bodies. In no way do I mean to deprecate the experiences of these individuals. Put simply, anyone who finds themselves at odds with the gender designated on their birth certificate has a rough time of it. As a matter of fact, I envy these “clear cut” transgender people because at least they have certainty, whereas I am adrift in a sea of ill-fitting gender roles, performances, and labels.

I don’t know what gender I am, but I do know that the little girl who dressed up as a princess for Halloween three years in a row and lugged four dolls with her everywhere until she was eleven was me. I was active in the Girl Scouts for six years and those years shaped me into who I am today. My childhood undeniably belonged to a girl but I feel no disconnect between those memories and the moments I am living right now. Beyond maintaining my scraggly beard and looking for the men’s room, “being a man” doesn’t really enter into my daily reality. I will carefully avoid my past when talking to casual acquaintances, but otherwise I find myself easily weighing in on discussions about menstrual cramp relief or the misery of being a seventh grade girl (a nightmare, for the record.)

I haven’t figured out how to tell my mom and dad that they didn’t lose their daughter and they didn’t gain a son: I am the same sum of my likes and dislikes. My adolescence got me a little turned around and I went from shaving my legs to shaving my face, but it is really hard for me to objectively say that I have changed in many other ways. I like the way bracelets look on my wrists. I am intensely self-conscious about how my hair looks, even on the best days. I am trying to figure out how to get paid for reading fanfiction. In short, I have always been and will continue to be my confused and – above all – happy self. 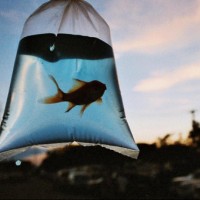 James is a grad student in the Midwest. When he isn't busy reading fanfiction or pondering life's great mysteries, he's probably taking pictures of his cat.