I Was a Queer, Sci-Fi-Loving Southern Alien Child

Screams echoed through the woods around the towering play fort at Camp Tanasi, where dozens of Girl Scouts in denim shorts and ‘90s-bright T-shirts chased each other over logs and under branches, some shrieking as they ducked and dodged, some cackling with triumph as they tackled other girls to the ground.

I watched the mayhem from my haven inside the fort’s base, receiving periodic dispatches from my deputy, a red-haired, round-faced girl named Felicia.* “There are more aliens than ever,” she panted, bursting in from the battle. “The humans are losing. We’ll win any second now!”

“Excellent.” I looked down at my broken pink-and-green calculator, which flashed a variety of cryptic symbols when its buttons were pressed. Earlier in the summer, when I met Felicia, a fellow “indoor kid” who had, like me, exhausted the drama camp programs in her area and been exiled to Camp Tanasi for some involuntary sunshine exposure and lanyard-based bonding, I had convinced her that it was an alien communication device, a transmitter that I used to send news to my native planet of Dolphineaglea. The device had remained our secret until this outing in the woods, when Felicia had urged me to reveal my alien nature to a group of the other girls, and I had, reluctantly, agreed.

“See, Felicia’s my human helper,” I’d explained, keeping my voice low so that only those gathered closest could hear. “But there are other aliens in this camp—even some of the counselors are aliens. Some of you might be aliens, too, and don’t even know it.” Pulling the calculator out for everyone to see, I let my finger hover over the enter button, making eye contact with four or five of the girls before I pressed down, watching them tense as they prepared to jump up and run, knowing I held them in the alien-transmitter-holding palm of my hand. “Until…right…now.”

It wasn’t the first time I’d told someone about Dolphineaglea. Back at my small Catholic school in Knoxville, where I’d just been bumped from second to third grade, mid-year, I’d told my best friend Eiko all about the planet I came from: about its purple and many-mooned skies, about its gray and green mountains and magical rivers, and all about the creatures who lived there, who were much more like me than anyone I’d met in Tennessee.

I explained to Eiko that because I had revealed my true nature to her, she would soon start receiving signs from Dolphineaglea: like a special book, wrapped in mummy’s bandages, hidden under her bed, or messages in mysterious languages, scrawled on the underside of her desk. Every morning, I’d ask her if she’d received the latest communiqué, and Eiko would nod, solemnly, picking up the story wherever I’d left off with the prompt. “It was all covered with mummy dust, and I couldn’t read the writing at first, but then I brushed it off, and I found…” We sometimes used Dolphineaglea as a setting in games with our other best friends, Erin and Sarah, but we didn’t tell them the whole story: the details and lore remained between us.

Before Dolphineaglea, I told people I was a 207-year-old vampire named, for some reason, “Zoe,” or a royal exile, or a witch who lived in a lair beneath the monkey bars when not attending classes. For as long as I could remember, I’d tried to explain the gap between me and most of the people around me with these stories, trying on all kinds of different, outsized identities, figuring out which ones fit. I was a kid who loved storytelling and performing, and inventing various fantastic backgrounds came easily to me. Some of the details I fabricated, however, were more mundane, like telling classmates I’d been born in Massachusetts, where my mother was from, or in Canada, where my parents had lived before settling down in the South. The scope or content of the lie didn’t matter as much as what I was trying to say: I’m different. I don’t know why, and I don’t know how else to tell you. But I’m trying to name it, and “alien” or a “vampire” or “shape-shifting spawn of a time-traveling unicorn” is the closest I can get.

People like me weren’t on TV. Girls who preferred to be Aladdin instead of Jasmine when singing “A Whole New World” didn’t make it onto Nickelodeon, and girls who chopped their hair short and dreamed of owning a Harley Davidson were never featured in Disney movies. And no one had a limp, like I did, unless they were old or evil or brought onscreen for a few moments of comic relief. I wasn’t just a queer little girl: I was one with a joint disability, a genetic legacy I couldn’t find representation of anywhere outside my family.

But I knew there were worlds where people’s bodies were different, where they’d evolved for different means and landscapes: I read about them in books. I saw less of them in film, but in the books of Madeleine L’Engle and Ursula K. Le Guin, I learned about places where people seemed like they might be more like me. These fantastic realms had to be real, I reasoned, because how else could I explain what I was? I never heard the words “lesbian” or “gay” unless they were used as epithets, or as a marker for an unseen group of people that I’d been made to understand didn’t, and couldn’t, have anything to do with me. I didn’t read books where girls had crushes on other girls, or where bodies were considered “graceful” or “beautiful” even if they occasionally lost their footing.

It was no coincidence that I named a planet after two creatures that could fly and swim, respectively, two forms of movement that wouldn’t be hindered by my malformed joints: no surprise, in retrospect, that I wanted identities to explain my difference, to make me feel comfortable with it. But what was fundamentally unfair, and what I didn’t realize until much later, is that there is no lack of people like me in the world. Queer people, people with disabilities, people of non-normative shapes and colors and sizes: we make up most of this large and varied world. It is our planet. The images beamed into my living room were the alien ones, the transmissions from a planet where only the pale and hetero and physically hale triumphed, where everyone else existed only as a punch line, a lesson, or a tragedy. I didn’t know what world that was, but I didn’t want to live there. So I made up my own.

This is why representation is crucial: to evince what already exists, and give voice to those who find their realities erased and denied by the mainstream. The only spaces that broke the binds of gender and normative ability for me in childhood were fantasy spaces, which other kids would usually enter into willingly. But those spaces proved unsustainable: childhood was ending, and those illusions couldn’t hold.

It happened with Eiko, a year and a half after Camp Tanasi, when I transferred to a school across town and came back to St. Joseph’s for the fall festival. She had become closer to Sarah and Erin the year before I left, choosing to play house with them over my “let’s be people-eating dragons” game. They showed up at the festival with matching side scrunchies and won handfuls of red game tickets, which they used to get me thrown into the “jail” set up by the festival runners, taking turns with their tickets in order to keep me locked up as long as possible. Why this was a feature at school festivals back then, I’ll never know: at my new school, a few years later, the same event would occur with another girl on a much grander scale, with dozens of kids paying to keep her locked behind the cardboard bars. She eventually left the school due to bullying: at least one girl a year did, from fifth grade through eighth.

Some adult realized what was going on and let me out of the ersatz jail, leaving me less upset than bemused. I found Eiko hanging out with Erin and Sarah near the jungle gym and demanded an explanation, which she refused to give, while the two other girls looked on, snickering.

Finally she grabbed my arm and pulled me in, whispering: “I’m not weird. You’re weird. I don’t even know if you’re an alien, but you’re definitely weird. So you can’t be friends with us anymore.”

They all laughed, and I walked away, perplexed. I thought we’d had a kind of pact, those other girls and me, but we didn’t: they were just playing. I wasn’t. I lived on Dolphineaglea, and couldn’t quite seem to get through to Earth.

But all of that was months away as I sat in my wooden hideout, watching the chaos Felicia and I had sown among the Scouts outside, hearing the cries in made-up languages from newly identified aliens echo through the trees. Later there would be a reckoning, and questions from the counselors, and punishments for humans and aliens alike. For now, though, I marveled at the unveiling going on around me: all of these yawping creatures, who I’d thought were normal and straight-laced and merit badge-obsessed, casting off their manners and their affectations and everything they’d already been taught about what it was to be a girl and revealing their loud, messy, genuine, unpredictable selves. The aliens hadn’t landed: we’d always been here. And for these few sun-soaked moments, we were shouting it with joy.

*Names changed to protect the human. 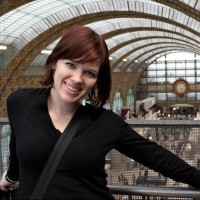 Katharine Duckett now uses her overactive imagination to write speculative fiction stories for publications like Apex and Interzone. She works for Tor.com and lives in Brooklyn with her fiancée and all the books.