Why We Need to Build More Diverse Worlds in Fiction

There’s no running from worldbuilding anymore. A tidbit of information about The Hunger Games films or “Game of Thrones” leaks, provoking fans and news outlets alike into a frenzy. Entire wikis are meticulously curated for each series, every line and scene analyzed for maximum informative potential. The ability to craft an expansive fictional sandbox for readers to immerse themselves in has become as important as plot lines or characters in determining the enduring popularity or success of a fantasy series.

But in the fervor of fans, the celebration of these cultural phenomena, there is often a tendency to overlook the significance of similar works and worlds created by writers of color and those who represent marginalized or oppressed communities. Fictional worlds that prioritize the representation and reflection of the lives of people of color is vital; for just like anyone else, says sci-fi/fantasy author Kirk Johnson, people of color “hunger to see [themselves] as heroic figures, desperate parents, star-crossed lovers, or battle-weary outcasts.”

The possibilities of worldbuilding for readers are endless, yet the finished products often fit into familiar, well-worn stories and themes: sorcery and dragons; technology and space; a post-apocalyptic dystopia where all is not as it seems. For all their acclaim, series like “Game of Thrones,” The Hunger Games, and Harry Potter generally adhere to widely accepted visions of what fantasy or science fiction should be: fantastical variations on historical time periods, futuristic speculation on how humanity’s modern problems could spiral into dystopia, or fantastical imaginings of modern times. They often reflect the overwhelmingly white characters and communities whose perspectives are always given the most literary attention. Which is not to say that any of the aforementioned popular series aren’t riveting and highly entertaining — they are. But stories that ignore or overlook the realities of oppressed and marginalized groups (or seek to replace them with fictional analogues like elves, ogres, or vampires) can also undermine their own potency and potential.

For readers from marginalized communities, communities impacted by oppression and violence, fictional worlds have the potential to act as irreplaceable portals through which we can grapple with not only our tumultuous past and difficult present, but also the promise of a more hopeful future.

As writers of color continue to slowly gain space and visibility in the realm of publishing, the scope and possibility of what permutations worldbuilding can encompass also expands. We can consider worlds in which protagonists must contend not only with dark prophecies and darker enemies, but also with gentrification and unreliable subway lines. Worlds in which the physical forms and identities of deities and heroes are as multicultural, multi-hued, and complex as the ordinary humans amongst whom they live and die. Worlds in which humanity is challenged to reconsider notions of sexuality, gender, race, and even our identity as a species, each struggle just as vital and important as the others.

Authors like N.K. Jemisin, Daniel José Older, and Octavia Butler craft worlds that don’t include people of color solely as token acknowledgements. They rely on the existence, variety, and vitality of minority communities as the foundation of their worlds. And rightly so, as the stories and struggles of people of color and other groups in the margins have long served as the inspiration or basis for myriad stories within the sci-fi and fantasy genres. To quote Junot Diaz: “Without our stories, without the true nature and reality of who we are as people of color, nothing about [science fiction] or [fantasy] culture would make sense.”

Through diverse representation and the inclusion of stories that center more people of color, the potential of what a fictional world can be or represent deepens. When done well, worldbuilding represents more than just the allure of escapism, a respite from the world we inhabit — it can also create the opportunity for a deeper understanding of our own world, by tweaking the reality we know in ways subtle or dramatic. To delve deep into comprehending our problems, our history, our differences — fictional though they may be in fantasy worlds — is to seek a more profound understanding of how societies are formed, how tiny moments and choices can have immense impact, and how each of us has the power to help to shape the narrative of the world around us. As Jemisin writes:

So, for those of you who get frustrated by how often I post about Ferguson, or bigotry in video games, or whatever, and who wish I would just stick to writing…well. I get that you might not be interested in the stuff that interests me. But you might want to expand your definition of what’s relevant to writing, is all I’m saying. For the worldbuilder, all the world is necessary fuel.

What we learn about our own reality can often prove as fantastic or strange as anything in fiction. Anyone who has spent hours on a Wikipedia bender that starts at “toothpaste” and ends at “Tesla coils” understands that part of the appeal is not simply understanding the “what” of a thing, but the “why” and the “how.” Fiction encourages readers to engage with the reality we already know with our views slightly tilted — to see the world we live in with fresh eyes. The imagining and understanding of new worlds can encourage us forward in the real world, towards a different or better state.

There are potential dangers, of course: highly detailed worldbuilding can divert our attention from truly seeing the people who inhabit these worlds, or thinking critically about all of their choices. Yet the idea that worldbuilding might encourage myopic, unquestioning, or passive devotion on the part of fans both underestimates us as readers and misinterprets our love for the series that move us. There is little to be seen as passive or powerless in readers seeking to fill in the gaps of a real world that is lacking; to drive back the fog of ignorance by leaving no stone unturned — including in fictional worlds — in a pursuit of a deeper understanding of humanity.

Author Daniel José Older reminds us that writers must also take responsibility for the contexts chosen for their stories, as well as those contexts that are often ignored, unacknowledged, or suppressed. In “Context as Crisis: The Street is a Book,” he writes: “The art of contextualizing is inherently political because it defines what matters: what we place center stage, what we push to the margins, what we erase. A photographer makes this call in an instant – with a turn of a switch or the choice of an angle, a massacre can become a revolution and vice-a-versa. When crafting a story, it’s the writer’s job to let the world bleed through onto the page in a way that feels natural, unforced. What truths are told in the daily existence of each character? What secrets does the street reveal?”

The real importance and impact of worldbuilding lies in what worlds we choose to pay attention to, which narratives we choose to engage with, whose stories we choose to tell. Tell a variation on the same story enough times to enough people and it can become a kind of truth by consensus. Without diverse worldbuilding in fiction, without all kinds of characters and stories to love, we can’t see the whole picture. Only through the inclusion of a plurality of voices, of experiences, of identities, can we ensure that the fictional worlds we love to play and engage in reflect the truth and the complexity of our imaginations and our own rich, diverse reality. 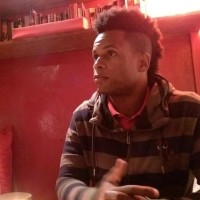 Bernard Hayman is a writer, Fulbright scholar, and U.S. Army veteran. He writes speculative fiction and the occasional observation about issues impacting marginalized and oppressed peoples -- usually while listening to Hans Zimmer.