NBA Jam was an arcade game released during the summer of 1993. The game was a larger than life simulation of basketball; players could perform unbelievable feats with current NBA players: somersault dunks, half-court shots, setting the ball on fire. As a child, I was obsessed with all facets of the game: when I wasn’t watching basketball on TV, I was practicing free throws, or begging my parents for quarters so I could play NBA Jam. My collection, “Enter Your Initials For Record Keeping,” is a series of essays about each of the teams in the game, as well as my relationship with the game of basketball–as observer, as player, and as a strange hybrid of the two, controlling the hyper-real avatars of my idols as they razzle-dazzle and do things the universe would not let me attempt, no matter how hard I wished.

I have never seen myself play basketball. I was not good enough to be studied on film—to have cameras pointed at my body, to track my movements, to see which way I would roll (the left, always), how I created my shots. Seeing my body on film is a harrowing experience—it would be even moreso to watch me do something that I am not good at; we hope that the world is only interested in documenting our strengths, but there is a love of error—of air balls and blocked shots.

When I am shooting baskets by myself, this is the best basketball player I can possibly be. There are no defenders looking to swipe the ball away—there is no shot clock, no audience, no outside pressures causing me to miss. Every shot is an open shot, which makes every miss even more frustrating—this game will never be any easier. Yet there is loveliness in the quietness—the only thing heard is the echo of the rubber as it bounces off the floor in varying cadences.

The Lakers in the game are in disarray—it is hard to believe that there was a time where a storied franchise was in a rough patch, but here we bear witness: the Showtime Lakers of the 70s and 80s have dissolved with the sudden retirement of Magic Johnson due to contracting HIV. Gone is the razzle dazzle—the up tempo fast break. What we are left with is James Worthy at the end of his career and Vlade Divac: both stiff-legged and matte; no slickness, all of the sleekness rubbed away.

The crowd does not change in the game: it is the same collection of sprites in the background. There is a man in a dark suit who repeats himself—an obvious way to cut down on art production. There is no reason to watch the crowd in the game: the action on the court is too fast to pay much attention to the background layers. They cheer when there is a dunk, large sections standing up for a moment before sitting back down while the basketball is brought up into the frontcourt. They boo when someone is shoved to the ground or loses the ball, showing their disdain for ugliness. They have no loyalty to either side—they are there to be entertained; to love the big play, the fast break, the cinematography of it all.

A sportswriter famously said of the L.A. Forum, “You go to The Fabulous Forum, and you get a basketball game in between lounge acts.” Basketball is meant to be entertaining: there are flourishes, exclamation points, risings and firings. You buy the game for the dunking: the ability to do flips in the air that could never be imagined—to leave from the free-throw line and spin like a figure skater, to deliver the ball with a satisfying chunk. There is nothing majestic about bodies breaking down, the willing of a basket, of fundamentals—chest passes and tight defense; every layup an insult to the audience. There is no one who wishes to witness what it is that I do—no four-act play, no ticket stubs taken at the door and held onto—wedged in between the corners of mirrors to remind you of what you have seen.

Where I shoot baskets, there is an indoor track that is suspended above the court—sometimes I see someone I know, headphones on, eyes forward and running. They are doing the same thing I am; running will never be as easy as these conditions allow: a constant battle between one’s self to improve. When they see me, they wave and I wave back. I am self-conscious of my shot selection, my follow through. How long have they been watching? How long have I had an audience? I move my feet closer to the basket: I dribble more, take more time in between shots. I stop attempting three-pointers. I put an end to the turn-around jumpers, the hook shots, the runners in the lane. There is nothing fashionable here anymore—nothing to record. I am the lounge act in between greatness: watch me croon for a laugh before we return to our scheduled programming. When it is all over, no one will save the recording for safekeeping.

I was born in New Jersey—you can hear it in my speech: how I pronounce Os as As, how I add a letter to the word both, how Ws find their way into words on nights that grow too long with gin.  Nights I tell stories of missed shots all happened there: in middle school gymnasiums, in driveways where you couldn’t shoot from the left baseline because if you missed the ball would roll down the hill to the forest.

My first basketball game was a Nets game. My father took me to East Rutherford to see the Nets play the Clippers. Our seats were behind the basket a few rows back; an angle I had never watched a game from before—the game always looking perfect from half-court as cameras track the ball wherever it goes. It took me a long time adjust to this—how I was unable to keep pace, how the players looked different when looking at them head on, how they disappeared down the court and grew smaller.

My souvenir from the game was a coffee cup and a Nets wristband: the red, white, and blue logo, one for each arm. I remember crashing hands together, as if the wristbands gave me power—that I could be stronger than I ever have been, that I could fly, that I could read the minds of everyone within thirty feet. I could make every shot. I could stop the ball from rolling into the woods. I would eat ice cream out of the coffee cup, as I was too young for coffee, and sometimes feel as if I still am. This is what it is like to be a grown-up, I thought—to be old enough to appreciate a basketball game, to come home with something more than just a memory of what it was like; that carrying these thoughts with you will never be enough. We do this because as we get older, we remember things incorrectly—we imagine things that were not there, give importance to the minute.

My first memory was holding onto the walls at my grandparents’ house as I walked into the room where my parents were watching television. It is then I came to as a human, as if my body existed but the rest of me did not—as if someone pressed start and took over the role of the computer, replaced it with a live human whose patterns became more and more erratic. I remember wood paneling. My mother cannot pinpoint any of this; she does not remember who had this house—my grandparents certainly did not. I would provide more details, but I can’t; my consciousness left the second the lights flickered on.

I am telling you this because there is a ghost in the machine. By the time the game reached peak popularity in late 1993, Dražen Petrović was dead. Considered to be one of the greatest international players of all time, Petrović was killed in a car crash on the Autobahn during a rainstorm: a tractor-trailer lost control and the car Petrović was in crashed into the back of it, sending him through the windshield, his head smashing against the semi-truck’s diesel tank.

I don’t remember if I saw Petrović play that night—I cannot place how old I was, or what year my father took me. I might’ve gotten the coffee cup and wristbands on different trips—we saw a few games when I was younger, but they all blend together: the first time I saw the Celtics, the time I cried when my father’s alma mater got blown out by North Carolina.

Petrović was removed from later releases of the game—his pixels swapped out for Kenny Anderson, the Nets’ second-year point guard. The game, however, remembers Petrović; at random intervals, even when the Nets aren’t playing, the announcer will shout his name, Petrović!, as if he is taking a long distance shot, or rising up for a tomahawk dunk. In later iterations, when Anderson takes a shot, they’ll shout out Petrović! as if he is hiding within the machine, waiting to be unlocked.

I am waiting for the moment that I come into being. There will be a moment where I will lose all knowledge of everything that I have ever done; that I will forget the names of those that I love, that I will misremember what is in my heart and why it is there. The night that I misremember, I was there, waiting to bubble towards the surface, my hands running over the grooves in the wall. When you play the game you are two places at once: you are on the court and you are standing in front of the machine, as if you are shrouded in prayer. When you are playing, you are Dražen, you are unstoppable from the corner. When you are playing, you cannot leave the court—you are forever in the field of the game. You try to run past the baseline and into the crowd, up the stairs of the arena. You do this to see if you are there, younger than you’ve ever been, pressing your wrists together, willing the ball to go in. Instead, your feet will pump and down, yet they will never catch the ground. You will continue to do this until someone brings you back. Once you exist in a place you can never truly leave. You will do this until someone calls out your name. 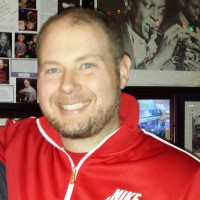 Brian Oliu is originally from New Jersey and currently teaches at the University of Alabama. He is the author of So You Know It’s Me (Tiny Hardcore Press, 2011), a series of Craigslist Missed Connections; Leave Luck to Heaven (Uncanny Valley Press, 2014), an ode to 8-bit video games; and i/o (Civil Coping Mechanisms, 2015), a memoir in the form of a computer virus. His works in progress deal with professional wrestling, long distance running, and NBA Jam (not all at once).