a defiant pulse of color on the whitewashed hallway—

I think that I knew that you would leave eventually, and

the night after a sweaty school dance.

recede into a background of doormen and dog walkers and snow

serenaded by the fanfare of car horns and delivery trucks–

i wonder when you stop and realize that you are alone.

and you’re skipping school, this time for the protest—

And you’re at Sephora, radiant, in gold glitter eyeliner,

And you’re meeting the assistant principal, the principal,

the countdown clock is closing on midterm week.

when you walk away,

I’ll be thinking of when I first saw you

sleeping outside of Latin class, of how

space, how it’s so easy to run away from truth disguised as wildfire.

In my head, when you leave,

I’ll be thinking of how you can’t wear gold eyeliner outside,

how you’re magnetic even when you’re in hiding,

how you remembered to ask me if I got home safe.

and I’m still asking you which pronouns you prefer.

I am suddenly struck by the insignificance of a life and

and trying to write this again but if I did care

I would’ve warned you.

I don’t know how or about what

but i feel like you needed to know something that

you were the first trans kid I knew and

you could care so much about people

maybe I just wanted to tell you:

Confession: I judged you for sleeping outside of Latin class, that first time.

When when you called to say you loved us all,

J thought that you were saying goodbye forever,

and I almost believed her.

Confession: We all assumed the worst that night,

when we found out you weren’t where you were supposed to be,

and wondered where you really were.

You sounded fine on the phone, but J said that

you were good at sounding fine, said that

you sounded fine when you were leaving.

Turns out you were fine.

I guess I still don’t believe it,

dont know the difference between abandoning

I still worry: about you,

and about the possibility that one day

I’ll be afraid to ask you if you got home safe. 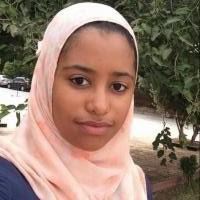 Romaissaa Benzizoune is a rising senior at Hunter College High School who enjoys writing slam poetry, short stories, and passionate articles. She can be found studying at her local café, watching Law and Order SVU on the couch, and crooning to Amy Winehouse when no one else is around.