He took me into his bedroom, which was painted red. Other than the bed, the room was empty, just red. I could do things to you, he said. But maybe he didn’t say anything at all. Maybe I wanted it.

He told me that he found the red color relaxing. He was depressed a lot, he said. He hadn’t seemed depressed to me. We began the familiar procedures: removing clothes, touching, imagining. I couldn’t quite remember how I had gotten here.

You think you know what’s coming next, but you are wrong.

I lay in his bed and looked at the red walls. I couldn’t identify the feeling I had. I wondered if I should leave and pretend that nothing had happened at all.

The first time I felt afraid, I was a freshman in college. He was, too. He lived in my dorm. I’d see him every day, both before and after. I’d see him filling his tray at the salad bar, piling dressing on top of insipid lettuce. I’d see him talking to friends. I’d see him at parties. I’d see him playing piano in the rec room – he was a great piano player.

I was never entirely clear what had happened, only that it had bothered me. I mentioned it to my friends, and they said, sure, he stands too close. He touches too much. He likes to stand in the hallway in his towel and watch girls go into the showers. But I didn’t know what to think. I only knew that I had felt afraid, and that he had been between me and a closed door, and no one would ever believe the truth, even if I knew what that was.

Trusting in some authority, persuaded that my feelings were worth something, I spoke to resident advisors. They sent me to the college shrink. When I went to my first appointment, she turned on a tape recorder. She asked, “What do you think is wrong with you?”

I burst into tears. “Everything,” I said.

What had happened or hadn’t happened never came up.

Afterwards, everything terrified me. All I could imagine were disasters. Riding in a friend’s car, I imagined that she might drive right off of the overpass and we would crash. I imagined my body riddled with tumors. I imagined my parents dying. When I closed my eyes at night, I only felt afraid. My thoughts made mushroom clouds on the backs of my eyelids.

There was a closet in my dorm that I would sit in. The walls were a reddish-orange. It contained the detritus of dorm parties: streamers, printed t-shirts, and tiki torches. I called my mother and cried. I told her that I wanted to come home.

I bought Snickers bars from the vending machine in the laundry room. I ate them in bed and wore pajama bottoms to class.

I was told that someone would speak with him, but I don’t know what was said. Nothing changed for him. He was still putting ranch dressing on his salad. He was still walking down the hall in his towel. He didn’t go to a shrink. He didn’t think there was anything wrong with him.

The next time it happened, I was wiser. Someone who’s a victim once is more likely to be a victim again. I didn’t learn that until afterwards. The shrink didn’t warn me.

The next time it was worse. That time, I did scream, but no one heard. I did push him away, and he looked at me incredulously.

“What is wrong with you?” he said.

I doubted my own instincts. A friend said that it was supposed to hurt. “This is what it’s like,” she said. Okay, I thought.

When he called me, I went back even though I hadn’t forgotten.

Later, I became an attorney. I defended women in court who were abused by their husbands. I met women who’d been pushed down stairs, who’d been on the receiving end of a thrown appliance, who’d been chained to a radiator. Sometimes, they went back. Sometimes, I didn’t know whether everything they told me was true, but I believed them unequivocally in some essential way.

One I had a client who attacked her ex-husband in the hallway of the court. She drew blood with her nails. “She’s abusing me!” he screamed.

“Do you feel safe in your home?” That’s a question on the standard intake form at the OB’s office.

Check yes or no.

They don’t ask: Do you feel safe anywhere?

I told myself these little things that happened to me didn’t matter. Many people have it better. Most people have it worse. It’s like a rite of passage, being in the red room.

The second time, I ended it without telling anyone. I called my father and asked him to come and get me. He did. We rode the five hours home in silence. He never asked me anything, and I never offered. I was relieved. I didn’t have the words.

In college, a friend and I smoked cigarettes and joked about the jerks we’d hooked up with. I sought out people worse that the man who abused me so that I could feel better, somehow. I slept with men who said I should cut my hair short, who said I should wear different clothes, who said I should read less. I wanted to see what the worst of them would be like, the cheaters who said they loved their girlfriends more than me, the ones who slapped me just for fun, the ones who didn’t notice when I passed out.

Then I went to a class on French feminism and talked about Irigaray, and I imagined the speculum in my mouth, growing bigger and bigger, making my molars ache and my throat raw, and I didn’t see anything contradictory about this at all. In fact, I would even say that I sought these experiences out, I wanted to practice this contradiction again and again, over and over, until somehow it would sort itself out.

All the while, something kept growing, kept muffling me, but I pretended that I wanted it.

In law school, I lived with five women. I thought that we had built a female camaraderie. We used to joke about the feminist versions of things that we would promote – feminist rape songs, feminist slasher flicks starring Meredith Baxter-Birney. We knew better. We knew that it wasn’t supposed to hurt. There were no red walls in our home; they were all painted white.

But that fantasy didn’t survive. One roommate told me that, in Afghanistan, I would be stoned to death. “Be glad to be where you are,” she said.

The other roommate told me that I was toxic to her. “There’s always something wrong with you,” she said on the phone, her voice rehearsed. Someone probably told her to say it. I was bringing her down, she said.

“Why? Why is there always something wrong with you?” I can still hear her voice ringing in my ears.

I could tell you things about the men I slept with. One is now married and sells food for people with specific food allergies. He’s sensitive to the needs of others. When we slept together, he hit me so hard that I had red marks under my clothes. He pushed my face into the mattress and told me I was a dirty slut.

I knew what happened to girls who complained. They got made fun of, they got called names. People thought even worse of them. It was better to go along with it. “Hey, as long as it’s not my face,” we would joke, other women and I. “My brains are up there. Leave them out of this.”

He told me at the time that I would never forget him. He told me that I was weak. A stronger person would not have put up with it. She would have resisted. I often tried to picture this mythical perfect woman. She doesn’t think that there’s anything wrong with her. She goes through life assured that her feelings are the right ones.

For a long time, I resisted words like “sexual assault” and “rape.” “Date rape” is even worse as a word. It’s like rape combined with something that’s supposed to make you feel special. These words seek to define something that evades exact definitions. I was punched. I was fucked. These are exact. But. I felt uncomfortable. I felt like screaming. I felt my mind leaving my body. Those are not exact.

I was reluctant to give my own stories any more value by saying that they meant something to other people. I pretended like I didn’t mind. I turned away when people joked about prudes, when men I worked with sent emails about sluts, when people talked about other women who tried to speak up and said, “What’s wrong with her?” I see them now, and they are broken, too, but I didn’t want to think that I was like that. It was the only tool I had to master something that had spun out of my control.

But then I wondered if I wasn’t doing others a disservice. What if it were your story? Should I say that it’s your problem? Should I avoid toxic feelings? Should I tell you that you bring me down?

The problem is that women find themselves in the red room, and they don’t know how to get out. I remember that he locked the door, a simple lock, but I couldn’t hold my fingers steady enough to open it. 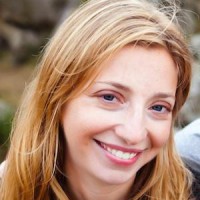 Jessica Pishko is a writer living in San Francisco. You can find her on Twitter @jesspish.