Femslash Friday: The Other Woman

First of all, the premise of The Other Woman is delightful and I love it. An asshole named Mark cheats on his wife (Kate, played by a hilarious Leslie Mann) with two other women, and the three ladies band together to take him down, becoming best friends in the process. At one point his former girlfriend, Carly (Cameron Diaz), explicitly declares to Kate (and to the audience): “We’re not in competition [with each other].”

BAM. TAKE THAT, HOLLYWOOD PATRIARCHY. Not only are they not in competition — Kate, Carly, and Amber (Kate Upton) are active allies. And, if we lived in a just, sense-making, emotionally sincere world, Kate and Carly would be girlfriends.

For the first three-quarters of the movie, Carly and Kate’s relationship progresses in classic rom-com fashion. They meet by fraught yet sexy accident; they bicker, then bond unexpectedly and stay up all night together, falling asleep side-by-side; when they befriend the significantly younger Amber, Carly gets jealous of Kate’s “girl crush” on her; and they are often thrown into compromising positions together, many of which bring them infuriatingly close to, but don’t actually culminate in, making out (even though at one point a drunk Kate actually begs Carly for “just one kiss”).

They get drunk together a lot, actually, and it’s great every time.  The first time it happens Carly starts off cold, but when Kate’s hilariously nonsensical questions suddenly take a turn for the plaintive, Carly decides she needs a drink to get through this.

And soon, through the magic of alcohol and love, they are laughing and cuddling and trying on clothes together.

And waking up beside each other in the pale early morning light.

“How could they become more physically and emotionally intimate without crossing into the romantic relationship for which they are so clearly destined?” you may be asking. What a good question! Please enjoy the following caps from the scene in which they first meet Amber:

Some completely canonical context: above is Kate, sprinting after Carly and trying to stop her from pursuing a younger woman.

Kate’s strategy is to tackle Carly to the ground and engage in a sexually fraught wrestling match. I applaud this strategy, as should we all.

Please pay particularly close attention to Kate’s face in this next image, as it is the epitome of sexual intimacy and also she definitely is having an orgasm; you cannot convince me otherwise.

Nope, nothing queer here. Not at all. Please move along.

After basically having sex in front of her, Kate and Carly enlighten Amber about Mark (remember him? Kate’s cheating husband/Carly’s ex/Amber’s boyfriend, the male plot device that gets these fabulous women together. I would provide a picture except I don’t care. He’s Jaime Lannister on Game of Thrones, okay?).

Movie-Kate asks if Carly is jealous of Amber’s hold over Mark, but queer-Kate, real-Kate, is teasing Carly for being jealous of Kate’s attraction to Amber.

…At least not on Amber, amirite Carly?

Of course you do, Kate. That is so heterosexual of you.

Kate and Amber don’t end up together. This is correct because Kate is Carly’s soul mate. I mean, there is a goddamn scene where Kate reaches an emotional closure and throws her wedding ring into the sea while Carly watches from a romantic, pining distance; then the two cuddle on the beach in the same pale light that fell on them the first morning they woke up next to each other. COME ON.

As is clear from the evidence assembled above, the movie kind of-sort of-definitely knows that these two should be together. But they can’t be, because who would ever pay to see a lesbian-led rom-com?

So instead, Carly ends up with Kate’s proxy: her brother. This follows the precedent of everyone’s favorite classic should-have-been-about-lesbians film, Bring It On, in which Torrance ends up with Missy’s twin brother, even though that’s ridiculous. Kate’s brother, whose name I can’t even remember because he is not very memorable (aside from his admittedly admirable talent for training Thunder, Kate’s dog and the only good male character in the movie), is a perfect safe stand-in for Kate herself. Same genes but straight. Carly’s feelings for Kate get shunted towards him. In the end they even have a baby together, even though Carly had never mentioned wanting kids previously. One can only assume that it is born to be the human embodiment of repressed homosexuality.

In this heterosexual tableau, you can see Kate and Carly holding hands and smiling as they look deep into each other’s eyes.

Here we have Bland Brother, who exists in this scene only to briefly bestow a kiss of compulsory heterosexuality upon Carly, and to then take a picture (totally not a couples’ picture, nope) of a joyful Kate and Carly.

Now, part of me still sometimes hesitates to queer stories about women who are friends because we barely have enough stories about women who are friends as it is. Obviously the solution is to fill all movies with both female friendships and queer women in relationships. But until we reach that golden age, The Other Woman offers an excellent substitute once you train yourself to see Kate kissing Carly in place of her boring brother. That is to say: queer The Other Woman and you still have good old female friendship.

This (the good old female friendship, not the gay) is thanks to Amber, who is very straight and whose delightfulness and sincerity keeps her from being any kind of third wheel; and to Lydia (Nicki Minaj), who gives excellent advice and shares Carly’s unabashed misandrist joy in Mark’s (literal and figurative) downfall.

Another fantastic thing about this movie is the way these women take a painful situation and learn from it, teach one another practical skills, and help one another grow emotionally as individuals — which makes them an unstoppable team when they finally take down Mark.

Kate and Carly make each other happier, stronger, more loving, than either of them were before. They are better together. So in a way, The Other Woman has it all. If by “it all” you mean “a plot easily queered by the invested viewer” and not “a plot that is already representative not only of the power of female friendships but also the beauty of romantic relationships between women, utilizing a bait-and-switch advertising campaign to introduce new audiences to the wonders of the gay/feminist agenda.”

One day, my friends. One day. 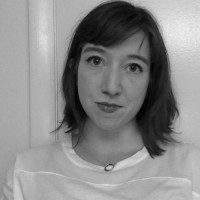 Natalie Thielen-Helper is a dog enthusiast from Hawaii doing arts-based education and outreach in Washington, DC. You can find her on twitter at @fruitbatalie.