If you’re always a bridesmaid, never a bride, don’t fret. Attracting the perfect mate is time-consuming and difficult in the best of times. But there’s an easier way, and it dates back to the 16th century. If you’ve been watching Wolf Hall and want that really joyful time in history to be your reality, then this is the recipe for you!

To ensnare a royal husband, take a leaf out of Anne Boleyn’s rulebook. In 1526, she was a lowly attendant to various queens until, allegedly, in the company of King Henry VIII, she served a certain tart that was so delicious and succulent that it literally bewitched him. So moist and delicious were these tarts that he left his first wife Catherine of Aragon, renounced the Roman Catholic Church and made Anne his queen, despite everyone else calling her “the great whore.” And they’re tasty, too!

Known as “maid of honour” tarts, these potent treats were named after Anne’s role as a maid of honour, or junior attendant, to the queen, which was the equivalent to finishing school back in the day. Despite seeming to be merely custard tarts with curd cheese, you can be rest assured that they will help you bag your own tyrannical murderous royal.

It’s important to channel Anne Boleyn in nearly every way to properly prepare for your imminent queendom while making these tarts. Usually, a queen had four maids of honour. But not you. When you become queen, you will have 60. Why? Because YOU’RE ANNE BOLEYN FOR CHRISSAKES. You were trained in France and the Netherlands, which makes you seem exotic to men and gives you all the feminine wiles of a French femme fatale. You are seriously so alluring that even though your complexion is constantly described as “sallow,” and you have a giant mole on your neck, men still fall at your feet. People have even described you as “knowing how to play the lute and other instruments.”

Let’s begin! However, please proceed at your own risk: these tarts have only been proven to attract an oppressive, blood-thirsty king who has a tendency to gain weight around the middle, preferred jokes about bodily fluids and was a total dud at foreign policy. His courtiers may or may not refer to him as a “huge child.” Also, he slept with your sister. A lot.

But he’s a king and you weren’t born a royal, so it will be totally worth it.

If done by hand, these tarts from the Tudor Era will take you approximately 36 hours, which is fine, as you are a Tudor-era lady and this will serve as a welcome distraction from your other pastimes of dancing, telling riddles and playing shovelboard.*

½ cup caster sugar (The recipe’s light on this for two reasons. First, it has to be ordered from the West Indies, and those shipping costs are pretty hefty. Second, if you eat too much, your teeth will literally turn black with rot, and there’s no backsies in 16th-century dentistry.)

75g butter, plus extra for greasing (make this with cream and a butter churn plunger – I could only find this miniature one on eBay, so here’s hoping you’re a doll)

zest and juice of one lemon (import from Southern Europe, shipping time 1-3 weeks)

nutmeg to taste (found in Banda Island, a tiny Indonesian Island – so be stingy and hide some away for later, as it also cures the plague)

30g ground almonds (Blanch them in cold water, take a cloth and dry them and then “stamp them small” in a mortar and pestle. This will take two hours. Plot your rise to queendom in the meantime)

To prepare, don’t wash your hands. This is not a thing until the 1800s, because – as we all know – illness is caused by demons and unbalanced bodily humors, not tiny creatures that live inside us.

Go to the dry larder to get the ingredients. Once they are in hand, proceed to the still room, where women do the baking.

1. In a bowl, whisk caster sugar, egg and yolk until light and fluffy. As you have six fingers on your right hand, you might want to whisk extra fast so no one notices. Pull your long sleeves over your hand so that people do not (correctly) suspect you are a witch.

2. Melt butter over the open hearth and stir into the sugar and egg mix. Add lemon zest, juice, nutmeg and ground almonds. Stir until smooth. If you struggle with this, keep calm. Don’t panic. Keep your head.

3. Drain curd cheese and add to the rest of the ingredients. Forget that cheese curd is disgusting and remind yourself that you are an expert at the game of courtly love.

4. Stir in cream and try to forget that King Henry VIII regularly wore out eight horses a day when hunting. Close your eyes and think of England.

5. Grease the tin. Don’t trust your lady-in-waiting to do this for you, because she is a plain-faced trollop who is destined to steal your beloved (hint: This goes double if her name is Jane Seymour.)

6. Combine flour and cold butter for puff pastry. This will take forever, so enlist a kitchen servant to finish this task.

7. Roll out dough and place into tart pans. Push thumbs in so that the dough is translucent, otherwise no king will ever renounce Catholicism for you.

7. Throw tarts in a brick oven for 8-10 minutes.  Forget the love of your life, Henry Percy, whom you have already secretly married. Henry who? Henry TUDOR, that’s right. You are destined to be queen.

8. The tarts will rise and rise and rise, unlike your flat bosom in your Tudor smock. Then they shall fall, but don’t read anything into this.

10. Cook until done in the stone oven. There were no forks in the Tudor era, so if you want to poke at the tarts to see if they are done, just use your sixth finger. This is what it is for, after all. That’s why they call it the poking finger.

And voila! Serve up these light and tasty tarts at your next soiree and get ready for your crown. It’s best to be seen eating these tarts with your ladies at Hampton Court or Richmond Palace. King Henry VIII was really a fan of “hard to get” so maybe when he goes in for one, knock the tray onto the floor and laugh. You did just spend 36 hours making them, though, so maybe not.

The king will like this sweet snack so much that he will steal the recipe and only allow the royal court to partake of their flaky deliciousness.  Even after you have caught the King’s attention, don’t give into his advances. Your power lies in withholding “sexual favors” and this trick will work out well for you.

Once you know he’s definitely going to ditch his current wife, then seduce the king and try to get pregnant. By January, you should be married and expecting!  Wait, it’s a girl? Well, you’ll have a boy eventually, right? It’s all good from here on out…

So sit back and wait for the love letters to begin. Hahaha! So long, Catherine of Aragon! So long being a lowly attendant! So long, Catholic Church!

*Anne would never have made these herself as she was too good for such a task, but unless you have your own attendants, you’re going to have to bake them yourself.

**Give the king an heir ASAP. Do not be too smart. Do not trust Cromwell. Do NOT flirt, especially with Henry Percy. Do not sleep with your brother. Do not blink too hard. Do not commit high treason. 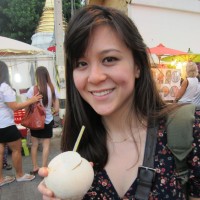 Jessica Pan is a lady who lives in London. Her first book, Graduates in Wonderland (Penguin Group) is out now, and was one of Jennifer Weiner's Top Ten Beach Reads. At last count, Jess has bewitched five kings. Follow her on Twitter @JessicaLPan.