The trip costs three dollars round trip. You have to stand in the aisle, it gets so crowded. To occupy yourself, you watch the other passengers, people like you who have waited all week to go to the beach. A man wearing headphones, reading the newspaper. He sits near a beautiful woman with a small child in her lap. Her two chestnut-haired daughters perch on a cooler in the aisle behind you, playing cards. In front of you stands a woman with no teeth, her long hair yellow at the ends, gray at the roots. Her bathing suit straps hang loose around her soft upper arms. She’s so old you think someone might give up their seat for her, but no one does.

“Where’s Helen?” she yells to someone toward the back, a woman with a window seat. “Doesn’t she come on these trips no more?”

“Helen?” The woman near the window wears a broad-brimmed hat that throws her wrinkles into shadow. “I don’t know. She’s probably at her nursing home.” She shrugs. “Either that or she’s dead.”

The toothless woman turns away. She complains to the driver that it’s hot and unbearable, even with the windows open. The driver yells that it’s 91 degrees outside and the air conditioning doesn’t work, there’s nothing he can do. Now the woman shouts at the man in headphones: “You told me it was 86!”

“Yeah,” he says, not looking up from his newspaper. “That was five hours ago.”

You spend the rest of the ride worrying about Helen.

By the time the bus drops you off an hour or so later, you’re happy to be alone. You unfurl your towel far from the families and lovers and lie down on it, one arm draped over your eyes because you lost your sunglasses the last time you came here on your own.

This is your first summer living by yourself, and you’re happier than you expected, but also lonelier. It’s 1997, you’re in college, and overly fond of the phrase “be in the moment.” In reality, you’re usually somewhere else, thinking of someone else.

Many someones. One person in particular. Blue-green eyes, sandy hair. It’s a relief now that he’s gone, but you’ve known him so long—since you were kids—that you still see everything as if he were next to you. This view, for example: don’t the sails of all the boats look like tiny crests of distant waves? You can feel his bare arm around you, you know the smell of his skin, like a beach in Florida you once visited together without ever getting in the water.

Now, when you dive into the ocean, you feel refreshed, your heart swells, then releases. A perfect day. But standing waist-deep in the perfect ocean, it doesn’t take long before that contentment recedes. Because your meager belongings are back on shore (towel, journal, almost-empty wallet) and of course there’s no one there to watch them.

Years later, you will cringe at all the tiny emotional upheavals, constant as the tide: wanting so much, wanting nothing, not knowing what you wanted. Eventually, studies reveal that your frontal lobe didn’t fully develop until age 23. Comforting news, in a way. But you will always feel tender toward your earlier tenderness.

In a few hours, it’s a relief to get back on the bus again, surrounded by familiar strangers and their beach smells, their beach exuberance and exhaustion. The man with his headphones, leaning against the window, eyes closed. The beautiful woman and her beautiful children. Her black hair is wet and the child on her lap grasps her face with his little hands, and she kisses the tip of his nose. Her daughters continue their card game in the aisle, sunscreen glistening on their shoulders.

The toothless woman isn’t here, but you’re not really thinking of her anymore, or of poor Helen, who is probably dead. You’re standing again, the air is humid, and in the seat next to you are two sunburned, shirtless boys, staring wistfully out the window.

“I can still smell the ocean!” one of them says as he puts his arm around the other, as you think of someone you loved, as the bus pulls away from the beach. 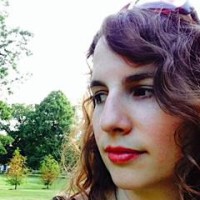 Sara Schaff teaches at Oberlin College. Her writing has appeared in Hunger Mountain, FiveChapters, The Rumpus, Carve Magazine, and elsewhere. Find more of her work at saraschaff.com.