Just let go of the wheel and keep your foot on the gas, I heard myself think, simple as an item on the To Do. I had just left my father’s house, and I was speeding towards an intersection when the lights turned—it was like I saw it from above, the cars screaming towards each other in a x of red and white—but I felt no fear of crashing. No itch either. I turned out of habit, and that’s what scared me.

I remember pogoing in the street in humid twilight, the creak of it like mattress springs, for hours.

I remember the heat of the car. Screaming as my mother put her hand on my head and forced me in. How, once she sat down, shut the door, she didn’t start the engine, just stared straight ahead at the door my father wasn’t coming out of, sweat down her neck like rivers. Love looks unbreakable, she said, until it breaks. The seatbelt buckles were shards of sun.

We said we wouldn’t get married, Deb and I. In half the states we weren’t allowed to anyway, and so solidarity, we said, exchanging bracelets instead of rings. Anyway, where was the radical in matrimony? Patriarchy, patriarchy, we said. The contracts of patriarchy. But Deb knew that it was a failed matriarchy I was trying to avoid.

I cranked the chair, every 15 minutes, woke up to crank it, to make you stop crying. I slept lying on the floor. A wind-up swing I remember as a metal X swinging across my vision, and colic she never forgave me for, removing herself from my father finally, because she couldn’t remove herself from me.

I keep her watch in the drawer of my bedside table—an L.L. Bean waterproof with dots above the numbers that used to glow in the dark, a band that un-loops from the watch-face. I remember her scrubbing it at the sink, rubbing the little piece of canvas between her palms like dice. Come on baby, come on now: No more falls, no more grass-stains, blood, sweat, dirt. In the light, you can see the scratches and crush on the crystal, where a lesser watch would have shattered.

Anyway, Deb had her brother draw contracts: wills, advance directives, powers of attorney. We signed beside the X. We had the joint bank account, the hers and hers sinks, hers and hers mirrors overlooking a joint view. We shared a bend of river, an occasional ship, the eternal fairy castles of a petrochemical plant. In our bed, I would put my lips to a knob of bone between her shoulder blades and leave them there until she fell asleep, and then, like a married person, I guess, I always turned away.

It was the vows I had trouble with, the second set of rings. My mother grinning in her red watered silk, tears in her eyes, saying all the days of my life as Barry pressed her hands between his palms. My father saying to Patrice in her white dress, ‘til death. When, before, the two of them had never even gotten to sickness, never gotten to worse.

I remember looking at Deb—we met standing on the street corner, she bummed a smoke—and thinking, for the first time, of dying. How I had to have her right that second—fuck Sylvia, fuck dinner, dancing, the third mother-fucking date. We would get old and we would die. I wanted rosebuds in my skirt, heaped high.

Love was like flying through the air—the creak of trampoline springs, the double-bounce, the dizzy height. At the top of it, when you felt yourself still at the top of your potential, you were supposed to tuck your knees into your chest, arms around. Dip your head to catch momentum on the way down. At some point, this stops seeming feasible: put the toy aside or, in this case, roll it down the sidewalk past the FOR SALE SOLD! sign, and a year later your feet are full of lead. Eventually, even a cartwheel seems impossible. God forbid someone suggests you try standing on your head.

Deb went to Mongolia—a Fulbright. Thinking it was a long shot, we’d been contemplating a baby, flipping through those laminated binders full of sperm. Instead, I held her hand at a travel clinic—she’s always hated shots. (Go ahead, make all the dick jokes you want, but first you watch a needle pucker the skin of your inner elbow until it pops.) At Christmas, I crossed the world for her. At the end of a tunnel of Ambien and engines wrapped in recirculated air, she stood wrapped in shearling. Men rode ponies across the streets, and at her home that wasn’t mine (it smelled like her—her cinnamon bark box on the window, her cigarettes —but it didn’t want me there, somehow, in its narrow bed) people were waiting to smile at me and speak a few words of English before turning back to their clatter. I only wanted sleep, and maybe first a bath, her soft thighs wrapped around mine as she scrubbed my back. Instead she stood on a caned chair, tapped her glass with a knife, spoke in their language my name. Being without you, she whispered later, as I lay in bed inside her arms, has made me realize I can’t bear it. Marry me, Helen. I didn’t move. I want to marry you. My arms crossed tight against my chest, I faked sleep.

Later when we went out to the country, we lay looking up at the moon through the skylight in the roof of our yurt, telling each other stories about ourselves—how we met, how we didn’t marry. She didn’t mention the future again, not any part of it. The moon was full, and that is now the only light—reflected—that I can see her by.

I remember: the rough drag of fire at the cigarette’s tip that brings the slip of smoke through the filter. The sound of the outlet breaking as my father ripped the telephone from the wall. I had sex with a man in an airport hotel in Tokyo (fish taste of rice crackers) just to see what new felt like. To see if I could feel it again.

I curled up in my childhood bed in my father’s house for a day and a half, but I couldn’t take it — love, forgiveness, reason. One time! he said, sitting on the bed. How can that matter? Is your relationship built on love or is it built on ownership? Does she own you? Can you be owned? I got in the frozen car in the driveway in the country. He stood in the open door like he might cry, the warm house behind him, and I turned on the engine. Its rough roar in the cold.

Papers tear with a sound of fire. Jewelry falls with a click and rolls on the tile kitchen floor. The city noise goes blank under the sound of my running breath—a rale, a crackle in the lungs like leaves burning. My mother caught up to me always—her arms across my chest in an X. If given the chance to go first, put your X in the center square. You’re guaranteed the win, or at least a tie. 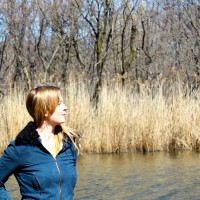 C. Morgan Babst is a New Orleans native and a reluctant Brooklynite. Her debut novel, The Floating World, about a family’s struggle to rebuild their lives following Hurricane Katrina, will be published in Spring 2017 by Algonquin. Chat with her on Twitter @cmorganbabst.