By Jennifer A. Howard

You can tell he has the virus the day he puts his hands on your face when he kisses you, warm fingertips canting your head a few degrees bit off north, which feels sweet, not terrible at all, but is not something he’s done in twenty years of kissing you. He’s picked this up from someone else, someone infected.

Later, the realization that you will both die, and soon, but first: Did the other woman instruct him to paw at her face, did she move his hands there? Was her face more instinctively touchable than yours? Or maybe he didn’t trust her to tilt her own head in response to his mouth; maybe they were all noses until he showed her how to make room for him. Why weren’t his hands sliding straps off her shoulder, unbuttoning her jeans, digging into the skin of her thighs, pinching, sweeping, pressing elsewhere? When he kisses you — when he’s kissed you before now — his hands were everywhere else.

Only the infected and the long-monogamous even kiss anymore. You have grieved for your daughter, her friends, who take off their pants without ever bowing their mouths toward another person first. Since the new rabies, there is no more kiss the bride, spin the bottle; politicians pats babies’ heads, an air kiss hurts worse than the middle finger. But you’ve been true to each other: you’ve kissed through grief and sour milk and boredom and surgeries and the move east after the supervolcano. You never imagined you’d kiss him for the last time. Already, he’s refused a glass of water, and he’s tippy, working hard to stay perpendicular. You tuck him into bed.

You don’t feel symptomatic yet. You don’t feel any craving to kiss the snowplow guy, the girls next door, the cat. Still, maybe you should figure out just how to open your mouth to somebody else, so you’re ready when the virus kicks in and you can’t help it. So your final, virus-driven kisses are pleasant. You head to the park.

On the walk: will the other infected think you kiss too soft, pull back too infrequently, sound odd? Will they think your tongue is in the wrong place at the wrong time? Where will you place your hands? You won’t know their body — how could you know their body yet? In the rabies menagerie: spit falling down. Mustaches and beards that gather wetness. Tongues too rigid and people with smells you don’t understand. Hands in places you don’t like, fingers in your hair that don’t pull hard enough, bodies too far away, too small, too high, too close. None of it makes sense as kissing at all. Teeth clinking and indecision about who leans in more and you’ve never dealt with other people’s hair in your mouth. Lipstick wax and mouthwash over gunk and people just saying aaaah and the smack smack smack of a friend. This is not kissing, any of it. It is slobbering and pecking and licking and you don’t know how the world has survived on this.

But the virus is making itself known, because your mouth won’t close all the way and your arms reach out. The hum down low drives you toward an empty mouth, and there is always an empty mouth, open and wanting. And for a while, there is maybe something pleasant and hopeful in the approach, in the eye contact of possibility, in the first tilt upwards of your chin towards a new face. One man seems promising, approaches slowly, smiles first, lands his lips soft. This is a sweet first kiss. But then the second kiss is the same — there is no escalation — and his hands stay at his sides and when you pull up closer he talks, he says words instead.

The virus wants your mouth on a mouth, but you cover your face in your hands, run home. Your last kiss will be him dying, thirsty and gasping against the sky. His mouth fits yours when you climb on top of him and hold him down and lower your face to his. The virus lets him kiss like he used to when you press his hands back against the mattress so he can’t surprise you with new gestures he learned somewhere else: slow and wet and patient and urgent and with an equilibrium the people in the park couldn’t manage. And even when he stops moving, you keep kissing him. So angry at the virus, at the world, for the terrible ending, furious at him for opening his mouth to somebody infected, to somebody at all, for killing you, for making you kiss other people badly, because all you had to do was be that one thing to each other, but now you’re going to have to call your daughter and say goodbye for both of you because some woman’s face seemed like a place his hands needed to be. You put your hands on his cheeks, you hold tight and tilt his chin sideways, and then further, until he realizes what you’re doing and wakes more up and tries to push you away, to wrench off your hands, but he’s not strong anymore and he won’t last and you hold tight, keep tilting his chin until his neck snaps like a promise, your tongue still inside the only mouth that ever made sense. 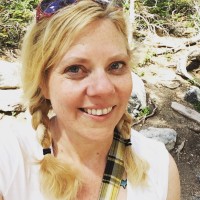