This Time Last Year: On Intimacy, Suicidality, and Abuse

Previously by KL Carr: “It Hurts”: On Domestic Violence.

This time last year I called the cops on my husband. I can’t completely remember the path that led to that, not the medium-term path. Long-term, he’d been prone to violent, scary fits of temper and self-harm on and off for years. Short-term, I’d gone to bed on an evening when going to bed looked like—was meant to look like—an act of war. My ability to fall asleep in the middle of a fight had long been useful to me, and maddening to him. But I don’t know what we were fighting about, whether it was a one-day or a two-day fight, whether I went to bed in a quiet moment or a loud one. My sense is that there’d been a lull, then a flare-up. It’s easier to remember contours than the content of a fight.

What I do know is this: after I went to bed, he came to wake me up, and I wouldn’t get up, though I opened my eyes. I know that he stood in front of me and wrapped a belt around his neck and pulled hard on the end. When he knew I had seen him, he bolted, locked himself in the bathroom. I know that I went to the door, and pleaded and knocked.

This was our routine: he performed despair; I performed concern. The belt was an important prop, and I knew what the script demanded when it came out. But then, he went off-script. When he unlocked the door, instead of coming out—weak and exhausted and contrite as I expected, because that’s what happened at the end of the belt routine, every time—he faced me with a bottle of Advil, and poured it into his mouth. I know that, in response, I said the right things, that I believed (still believe) that he held those pills in his mouth, hoping to get me to say the right things, even if I couldn’t mean them. He spat them out.

I know that at one point, maybe before the pills but maybe after, he came after me, and I was confused. Not that he had never hurt me. But that that was part of a different routine, the husband-in-a-towering-anger routine, not the despairing-man-with-belt routine. If he was trying to hurt himself and me, if he was mixing up his scripts, then maybe this wasn’t theater at all anymore.

I called the cops when he grabbed a knife, which had never ever been part of this game before. (How much time had passed? Did this take hours? Half an hour? Were there breaks? Did we stop, did we have a snack? Did one of us make a joke that the other couldn’t help laughing at? Any of this is possible. There was always room, in the chaos, for connection.) We were in the kitchen and he grabbed a knife and he ran it across his throat—and the crazy thing is I know I saw him do this, and at the same time, I know I couldn’t have seen it. He was outside at that point, beyond the yellow light cast by the kitchen window. The Man Who Ran Into the Night With a Knife. He wanted to show me, and not show me, all at once.

So the simplest explanation is that I called the cops because my husband grabbed a knife and ran outside and ran that knife across his throat. But the simplest explanation doesn’t hold, not really. Nor does the second simplest: that I called the cops because I didn’t understand the rules of the game anymore and couldn’t tell what was real and what wasn’t. Really, if I’m being honest, I called the cops because I needed a bigger audience: police, social workers, nurses, doctors. I called the cops the way George kills off his imaginary son in front of guests in Who’s Afraid of Virginia Woolf. I hit the panic button. No more make-believe, Martha. To my husband and me, this particular night was only barely beyond the bounds of what had somehow become our everyday back-and-forth. But to an outsider? To an outsider, this would look insane.

This time last year I was visiting the psych ward twice a day, mornings and evenings, for an hour at a time. I brought cookies and fruit, fresh socks, novels. He wanted me to visit, and then when I came he hated the sight of me, and then when I left we both cried. Our visits were observed, and we—experts at our own private spectacles, terrible in front of a real audience—never managed to perform the calm and stability we knew the nurses were looking for. Between visits I read Too Loud a Solitude in a café near the hospital. It was his book, one of his favorite books. I’d been meaning to read it for years. When that was done with that I read The Whispering Muse, a short novel about the Argonauts, also his. It was a beautiful book, but I didn’t understand the ending. I remember thinking we would talk it over later.

Then, after a while, maybe a week, between visits I started going home, instead of to the café. I started putting my things into boxes. I started deciding, on my own, what was mine (blender, Dutch oven, salad bowl) and what was his (coffeepot, skillet, knives).

The days stretched into a week, then two. They wouldn’t let him leave, not because (he said) they believed he was a suicide risk, but because (he said) I had told his social worker that he hit me. I don’t think this is true, though, again, I can’t really remember. It’s true that a social worker had called me, that first morning after a fire truck, arriving in a blaze of pink-blue light, came and took him to the hospital. (Why did they send a fire truck? It was much, much bigger than the situation demanded; much too massive and loud; it completely shattered our little play). And I am pretty sure the social worker didn’t talk to me much about his attempted suicide, or suicidal gestures (what is the terminology here, anyway? What do you call it when it’s deadly serious and it’s all a game—a series of escalating dares, new rooms added to the same old haunted house?). During that phone call, she talked to me about women’s shelters and help hotlines and the cycle of violence. I cried and cried. I’m pretty sure, though, that I didn’t tell her anything concrete. The thing is, I didn’t have to.

And honestly? I don’t think she told him anything either, despite what he said. “I’m here because she says she thinks I’ll hurt you,” he said to me.

“This time last year” is a game my brain has been playing for months, and maybe—just maybe—it will stop when all the anniversaries do. July to November to February to June, sudden thoughts have taken me over:

This time last year we hiked all day through fields and fields of California poppies. For a long time I could still see them, yellow-on-green, when I closed my eyes.

This time last year he sat on my chest and grabbed my neck. “I’ll rip your throat out,” he said, trying out a new threat. I thought it sounded fake, and I said so.

This time last year he talked me through every job interview I had, made me a playlist, gave me a beautiful old print of a green moth.

In the end we had three days together, maybe four. These last days are hard to remember, too. I know that he refused to talk to me for long stretches. I know that his whole body would be contorted in anger and pain and that it was real, and not performed, and I left him alone. I know that I was afraid to be in the house with him at night, but that I refused to stay anywhere else. I know, too, that on the last day, we had found a script again. He took me to the airport like I was leaving for any other trip, just going for a few days. At security, we held each other and cried, said words that we could not possibly have, at this point, meant, but that were the only words we could figure out to say. “I love you.” “I’ll miss you.” “I’ll see you soon.”

The Number for the National Domestic Abuse Hotline is 1-800-799-7233. A live chat option is available via their website. 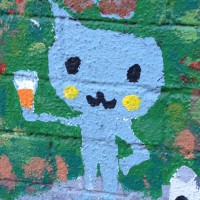 KL Carr lives by a river in a city.