The Power of Storytelling: Watching All My Children with My Mom

Go to half-day kindergarten, eat lunch with Mom, then at 1:00pm turn on the TV in the shade-drawn family room and together enter the world of Pine Valley, Pennsylvania: This was my daily routine in 1980, when I was five years old.

Pine Valley was a suburb much like the Maryland one in which we lived, but fancier and far more exciting: love affairs on the way up or down, illegitimate children showing up years later, French kissing. At the center of it all was a dynamic, diminutive woman with a perfect lion’s mane of dark hair, high cheekbones, and a face that turned on like a klieg light when she smiled.

It was my mom.

I was at the age when reality and fantasy mixed, when people on a screen were as real to me as my own mom, and in my mind something of Erica Kane got confused, or just plain fused, with my mom. That was her in there, molding reality to suit her desires. My mom, like many immigrant moms I know, seems to be fueled by a small nuclear reactor, always moving and doing and talking, her eyes glowing like a love demon’s. I remember when I was very young I once asked her if we could kiss like they did on All My Children. (She very emphatically said no.) Adding to the drama that leaked out of the TV were the stories my mom told of her childhood in Burma – the poisonous snakes slithering free in the streets; the mango tree her brother fell out of, breaking his arm; the one day a year when the whole country went around throwing buckets of water on each other.

She was a mesmerizing storyteller, with an eye for the lurid detail and a sense for just how much to exaggerate. You could never quite tell where the reality ended and the fiction began. I had her repeat her stories over and over again, as children do. They were touchstones in a vast, confusing universe. Her experiences and those of our counterparts in Pine Valley roiled beneath the surface of my quiet suburban childhood.

When I went off to first grade, I could only follow All My Children through my mom’s retellings. That fall, real drama arrived in my life. Doctors discovered a tumor in my mom’s brain, a benign craniopharyngioma near the pituitary gland, and the day after Christmas she disappeared into a hospital I wasn’t allowed to visit. I smelled her pillow every night she was gone.

She came back a month later, not much changed, I thought — except she was much plumper and, as we would discover as time went on, cursed with a faulty short-term memory. She would ask a question, and five minutes later ask it again, and five minutes later ask it again. It was scary to see the person closest to me losing her mind — not losing her sanity, but missing a basic function that linked one moment to the next, connecting these moments into a life.

We never spoke of the problem, but we all adjusted. We repeated our answers, remembered the facts, held down reality. Somehow the stories of my mother’s childhood remained intact and she kept telling them over and over, each time as if we’d never heard them before. She refined her punchlines to perfection. As I got older she added new stories of her years working as a statistician in Washington D.C. and New York City, just before she became my suburban mom. She was always the heroine of her stories — one of her favorites involved an office coup she pulled off in the 1970s, when she worked at the American Petroleum Institute and her boss was a man named Bob.

Enchanted by the drama of my mom’s stories but unable to get a word in edgewise to tell my own, I wrote instead. Stories about lucky kids in the suburbs who (unlike me) owned dogs, were whisked away by kindly cats to castle-filled lands, ate magic mushrooms and were transformed.

I also continued to follow All My Children through the weekly summaries printed in the Style section of The Washington Post. It was comforting to know the characters were out there living their parallel lives, and that no matter who else came or went, Erica Kane was not going anywhere. I found out later she was a new archetype for the soaps, a scheming “bitch goddess” written as a rival for a naïve, blonde ingénue named Tara, who had the more traditional role of a woman in need of a man’s rescue. All My Children creator Agnes Nixon deliberately cast the dark-haired, knowing Susan Lucci to play the role of Erica Kane. She was in a new “chic suburbanite” category of flamboyant money- and status-oriented characters. Throughout the years she got married multiple times (11) and had multiple children (3), but she was far more memorable as an ambitious career woman who worked as a fashion model, a cosmetics tycoon, a disco owner and a television personality, and who sometimes shirked her domestic duties when they conflicted with work. Here was a woman who could read as independent or self-centered, depending on your perspective.

It makes sense that shortly after my mom had given up her career and become a suburban housewife, All My Children would be the soap she chose to watch. For years we both also followed the real-life drama of Susan Lucci, who could not for the life of her win a daytime Emmy — the onscreen heroine who kept failing offscreen.

I began to see her storytelling differently, as her way of putting out stepping stones for herself, of stringing together a coherent life.

Eventually I lost the thread of All My Children and no longer recognized any of the characters but Erica Kane. I also began to tire of my mom’s same old stories. She talked nonstop, to me, to her friends, to strangers in the grocery store. There was a desperate quality to her storytelling, which I always thought was her wanting to cling to the old lives she’d lived. Over the years, the only new stories she added to her repertoire were of my brother and me.

Then I read an article by Oliver Sacks in The New Yorker about a man with the worst recorded case of amnesia in medical history, whose memory span lasted only seconds. He lived in a perpetual present. He too talked nonstop about topics stored in his long-term memory, and in a memoir his wife penned about him, she wrote: “Clive’s scripts were repeated with great frequency, sometimes three or four times in one phone call. He stuck to subjects he felt he knew something about, where he would be on safe ground, even if here and there something apocryphal crept in… These small areas of repartee acted as stepping stones on which he could move through the present.” Sacks added: “Clive’s loquacity, his almost compulsive need to talk and keep conversations going, served to maintain a precarious platform, and when he came to a stop the abyss was there, waiting to engulf him.”

While my mom’s condition was nowhere near as bad as Clive’s, the use of the word “scripts” feels right, as does a loquaciousness designed to keep panic at bay. After I read that article, I began to see her storytelling differently, as her way of putting out stepping stones for herself, of stringing together a coherent life. (Not so different from what we all do, I suppose, amnesiac or not.) I wonder, too, if the serialized nature of All My Children didn’t provide ballast: a storyline that stayed the same even as it changed; a heroine who stayed consistent through every up and down.

Because my mom was such a talker, I became a listener; because she had such a tenuous grasp on what happened day-to-day, I took refuge in the certainty of facts, which in our world are more virtuous than fictions. It’s no wonder that I became a journalist. I recently published my first book of nonfiction, and now I finally have permission to do what I loved as a child: make up stories.

Yet the ease with which I once crossed into the imaginary realm is gone. I feel like I’m standing at the edge of dry land staring at the wild, wobbly sea. It looks unsafe. My mother is out there, and forgetfulness and madness, my own personal abyss. If I don’t hold down reality, who will? As a mom now myself, isn’t it my job to be steady?

But my twin sons are just turning three, and I’ve found they need something else, too. Someone to play a customer happily being served Jenny Noodles or a patient painfully receiving shots in a doctor’s office. I ham up each of these roles and sometimes, because I have twins, I do both at once.

Ever since they were born, the mysterious phrase The child is father of the man has been knocking around in my brain. In Wordsworth’s poem, it’s supposed to evoke the continuity of consciousness in one person from childhood to adulthood. But to me, it means the ways in which we birth in our parents new kinds of consciousness; the ways that our children bring to us the things we lack. I never knew it before, but I needed a voice to tell me that the world of imagination is something to be taken very, very seriously.

After my checkup last night, one son ordered me to sit down on the floor by the Duplos while he, sporting his doctor’s jacket, pulled his chair up to the small table with his “computer” on it, ready to enter data into my medical record. 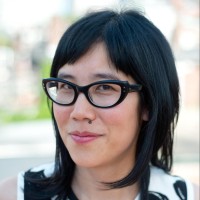 Val Wang is an author and multimedia storyteller. Her memoir, Beijing Bastard, was recently released in paperback.