A Thousand Stakes: Photojournalism and Exploitation

A photo has a thousand stakes. People respond more viscerally to images than to words; it’s why Nick Ut’s famous photograph of Phan Thi Kim Phuc running naked through the streets after being burned with Napalm helped bring about the end of the Vietnam War. It’s why pictures of Nicole Holder’s bruises at the hands of Greg Hardy caused more outrage than her actual testimony. It’s why an image of a young Black man throwing a police tear gas canister away from a crowd helped America wake up to the revolution in Ferguson, Missouri.

We don’t usually speak in journalism—especially photojournalism—about whether or not we have the right to a story. We just assume we do. Because, by definition, our job is to tell stories. Because we assure ourselves we have good intentions. Because we often do have good intentions. But communities that have seen themselves vilified in newsprint and Twitter timelines are not always going to risk sharing their stories with people they do not know or trust.

When I was a photojournalist at my college newspaper, the phrase “ask for forgiveness, not permission” was the mantra of our photo section. As a college student and an Indian-American woman, I was used to being overlooked and dismissed. So this was my watchword as I inched closer on a football field, maneuvered through crowds to photograph President Obama, and snuck into the dining hall to photograph lunch trays (the life of a college photographer is a mixed bag).

It is a mantra I have thought about a lot over the last few weeks. As the furor over media at Mizzou began to reach a fever pitch, with some journalists angry that protestors were denying them access and activists angry that protesters’ requests for a safe space were being ignored, I finally had to confront an issue that has always been dancing just at the corner of my eye. Tim Tai, a student photographer, cited the First Amendment and his right to photograph as protestors tried to bar him. I do not know what I would have done in his shoes, if the civil rights protesters themselves had demanded I stop taking photos. But I do know that a mantra that works when one is going up against laws set in place by people with power needs caveats when dealing with disenfranchised communities.

Breaking news photography is different from a photo story, the same way a news article is different from a feature. If I am sent out to photograph a breaking story, I might not always have the time or opportunity to explain to people that I am not there to vilify them. News, we are told, is a genre rooted in objectivity. The truth and its dissemination are what matter most. And this means that the need to showcase the news seems to trump the needs of those who are making it.

When I was a photojournalist at my college newspaper, the phrase “ask for forgiveness, not permission” was the mantra.

What happened in Mizzou is different than, say, the Iowa GOP denying The Daily Show access to their Growth and Opportunity Party (an event which gave Iowa caucus-goers the chance to hear Republican candidates speak) because the GOP feared ridicule. At Mizzou, protesters—students—were afraid of death threats and the racist vitriol they had to face in the protest’s aftermath.

Laws leave ample room for interpretation. It’s why both Civil Rights activists and the KKK are protected under the First Amendment. (And yes, a hate group could also protest being photographed. They, too, fight for a belief and have reasons to want to shield their identities.) But journalism will be dead in the water if we can’t identify and respect nuance. Is it really so ridiculous that students protesting racism would want a space where they felt safe? Their being in a public place gives us the legal right to report however we see fit, but the context around the issue makes it so much more complex than what is allowed and what isn’t.

Photojournalism is a beautiful, difficult, incredibly complicated medium, and it can all too easily feel like exploitation. We are extracting something from a source that seems revealing in a way that quotes and references don’t and can’t. Our interpretations don’t feel like interpretations. Photos feel like facts. And, unlike quotes, they can be taken without the subject’s explicit consent if he or she is in a public place.

In 1968, AP photojournalist Eddie Adams photographed General Nguyen Ngoc Loan, a Vietnamese officer, shooting a handcuffed prisoner in the head. Along with the photos of Napalm’s effects, it is one of the images credited with turning Americans against the Vietnamese war. But what you can’t know just from looking at it is that the prisoner was a Vietcong captain responsible for killing unarmed civilians. And Loan would never fully step out of the photo’s shadow; for the rest of his life people would brand him as a villain. In Time, Adams wrote that the photograph had “really messed up [Loan’s] life.” He went on to say: “The general killed the Vietcong; I killed the general with my camera.”

I photographed communities of color on Michigan’s campus countless times, and they were always tolerant, if not necessarily thrilled, by media attention. Sometimes I was welcomed by communities that badly wanted their stories to be told.

I shot protests held by the Coalition for Tuition Equality, where undocumented students spoke out about being unable to receive financial aid due to their residential status. I assumed that because they were putting themselves and their words out in a public place, they would be fine with having their photo taken. If one of those students had approached me and asked me not to photograph them, could or should I have said that documenting the event in its entirety was more important than their safety?

I was a photo editor at The Michigan Daily when the #BBUM (Being Black at the University of Michigan) Movement took place, when Black students at the University took to Twitter to alert the administration of the challenges of being Black on campus. I sent photographers out to cover demonstrations, and they were never asked to stop. But what if they had been? What would I have done? Told photographers to charge ahead anyway? Told them to see if there were ways to capture the movement without explicitly capturing the faces or identities of specific protestors, two aspects we normally consider crucial to photo coverage? Told them to abandon the assignment? Broad, blanket answers to these questions don’t necessarily exist.

Visuals matter; it is pointless to deny that. We must discuss how to temper potential exploitation with empathy and respect. Journalism requires a strong sense of self, the conviction that you are somehow adding to the conversation instead of detracting from it. With photojournalism, this gets taken one step further: We are profiting off of images of others, often at the expense of their sorrow, their rage, their joy. I have always struggled with the fear that when I raise my camera to eye level, I am exploiting my subjects.

A photograph of Michael Brown’s father crying out in front of his son’s coffin is enough to crack a soul wide open. It is an unvarnished look at reality. It should not let our hearts stay hardened. History books will likely feature it to say this is what happened. This is how it hurt. But in the meantime, in the present, in that moment, it can feel so wrong to click the shutter.

This, in the end, is what everything comes down to: A photograph may be worth a thousand words, may change minds, may help people in the future understand the mistakes of the past. But do those reasons justify my decision to take it? I can’t believe that the answer is as simple as “yes, always.”

It’s a paradox, and I realize that — how can we as journalists bring issues to light if we cannot always write about or photograph them? I don’t have a solution. But by trying to respect and engage in dialogue with people and their communities, by asking these questions of fellow journalists, by examining our own reasons for photographing, we may be able to find some answers.

A photograph may be worth a thousand words, may change minds, may help people in the future understand the mistakes of the past. But do those reasons justify my decision to take it?

After leaving Michigan, I thought I would stick to being a writer. But I love photojournalism; I love the craft, I love the way it drives a straight path from the eye to the heart. I don’t think I can give it up. What I do needs to evolve with what I know, and that applies to more than technical skill. I hope I approach each assignment with empathy, my thoughts turned both to intent and to impact.

As a photojournalist of color, and one who cares deeply about issues surrounding race, it is sometimes hard for me to face the fact that people protesting for a cause I believe in may not want me telling their stories. But why should I blame them? Communities of color — and particularly Black communities — have a right to mistrust the press. The press has a right and obligation to tell stories. These two ideas can exist in the balance, weighted and measured against each individual story’s circumstances. 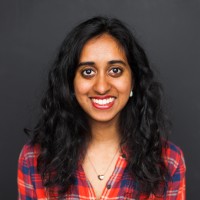 Teresa Mathew is a freelance writer and photojournalist out to tell your stories and pet your dogs.