Ten Scenes From My Bollywood Marriage

2. My older brother learns how to operate the VCR before he starts school: we do not have a screen-free childhood. We watch a lot of mermaid-themed videos, cementing my admiration both for Titian-haired Ariel and blonde siren Darryl Hannah, but the world of cinema also shows us something our mostly-white neighborhood can’t: Bollywood, where Indian girls fall musically in love, have dance-filled weddings, and, like Ariel, live happily ever after. Always the planner, I insist on dance classes before I can really walk.

3. When I get to school myself, I count a lot of white people. They’ll become my closest friends and unshakeable Facebook hate-stalkees, but logic also tells me something else. Odds are my Bollywood wedding will have an extracanonical – white – groom. I should probably see how I can fit one into the picture. Luckily my entire education seems to be geared towards teaching me about white men and their world.

4. When I am in elementary school, my uncle marries a beautiful blonde woman. Later, my friends and I keep careful note of her opinion of our boyfriends, because she is always right. Eventually, when I meet the person who will become my husband, I don’t have to ask for her opinion. Our courtship is Bollywood-perfect, which means that for the first year, we sneak glances at one another while assuming a posture of total disdain. When we finally admit our feelings one week before he has to return to his home country, there is a long interval during which time samosas and popcorn are available for purchase in the lobby.

5. Over deep-dish pizza on our honeymoon, my husband tells me that at our wedding reception, a childhood friend of mine drunkenly mentioned to him that he was completely wrong for me. “She told me you were the most Indian of all of your friends,” he says, but is confused, because he already went above and beyond my expectations of cultural assimilation by taking a Bollywood dance class. He looks amazing in a sherwani.

6. In London, where we live, I count South Asians everywhere. I finally get to experience walking down the street and feeling completely invisible. In Essex, where my husband grew up, they still sell golliwog dolls, but in the city, I can introduce him to Bollywood on the big screen. We see an option for unlimited Bollywood movie tickets for a reasonable monthly fee, but since I haven’t even seen half of the Bollywood options on Netflix, it doesn’t seem worth it. Instead, I finally admit defeat and watch New Girl with him so long as the episode is about Cece’s wedding.

7. Bollywood marriages, back when I was paying proper attention, mostly consisted of a cinematic courtship and then – zoom forward a few decades – watching your kids do the same thing. At my husband’s encouragement, I apply for what I thought was my dream job, in my dream US city. When I get the offer and look at the realities of their maternity leave policy, I balk. Later, when the non-ideal aspects of the job I take instead become unavoidably apparent, I do a little research. I find out that an Indian American man took the dream position in the end.

8. Because I grew up with a white swami, I’m well aware that Hinduism and brownness share space imperfectly, but the South Asian lady who constantly does readings at my husband’s church scares me sometimes. I do have a temple I go to here, but because there are lots of South Asians in London, it is not a temple/community center/Bollywood dance studio. When the brown lady does her readings, a whole roomful of white people listen to her (except for the one classy old woman who just reads The Tablet for the entirety of the service); for my future brown kids, I worry my temple won’t be able to compete.

9. Embodiment of human perfection Madhuri Dixit left Bollywood once. She didn’t have an interracial marriage, but she did move to another country to marry a guy who didn’t really understand the whole shebang. Twelve years later, she moved back to the country where she grew up. The country where I grew up is currently one in which a huge number of people insist that All Lives Matter, but also tell really good Bobby Jindal is So White jokes (the country where I grew up is Twitter), so: swings and roundabouts.

10. My husband’s favorite Bollywood movie is based on The Gift of the Magi, so its ending is pretty bleak for all involved. The last Bollywood movie we saw together ended with the husband going mad and dying in a lake. My favorite has the male and female leads happily in love, as it should be, but that’s not how the movie ends. Instead, it ends with a bike race victory that vindicates the main character’s family’s struggles. I’ve known for years that, probability-wise, I was going to end up in an interracial marriage, though him being foreign was a surprise. Unfortunately, my husband has not been able to teach me how to ride a bike. I’m going to have to write my own Bollywood ending. 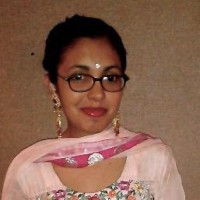 Rashi Rohatgi teaches in London and reviews books at Africa in Words. Her fiction and poetry appear in The Misty Review, Allegro, and Anima.