This is the first in a series of short essays by Anne Boyd Rioux about women writers in danger of being forgotten.

The academic movement to rediscover women writers was great while it lasted. But today some of the writers that feminist critics rescued from relative obscurity are once again in danger of being forgotten. Exhibit A: Constance Fenimore Woolson (1840-1894), whose stories were republished in 1988 only to go out of print again, and whose story “Miss Grief” was included in college literature anthologies, only to be taken out again.

The two things most people know about Woolson, if they know of her at all, are that she was a friend of Henry James and that she committed suicide in Venice. Sadly, they have probably also heard the erroneous story that she killed herself because James couldn’t return her love. They are rarely aware that she was a famous author in her own right, or that she was respected by critics and viewed as a successor to George Eliot and a peer of James and William Dean Howells. Woolson has become known as a tragic heroine in a story not of her own making, rather than what she really was: a marvelous maker of stories herself.

Woolson grew up in Cleveland and was taught to revere the written word early on. Yet she was also raised to believe that a woman’s name should appear in print on only three occasions: birth, marriage, and death. She didn’t start publishing until the age of twenty-nine, when she had to begin providing for herself and her mother after her father died.

Because she shared a middle name with her famous great-uncle, James Fenimore Cooper, Woolson quickly gained the ear of editors at Harper’s and elsewhere. By the time her first collection, Castle Nowhere: Lake-Country Sketches, was published in 1876, she was widely known as one of America’s most promising writers, a status that did not come without controversy. She once wrote that she had “such a horror of ‘pretty,’ ‘sweet’ writing” that she was willing to risk “a style that was ugly and bitter, provided that it was also strong.” Many critics applauded her efforts to write in a less sentimental style. Others, however, criticized her stark realism and unwillingness to give her stories predictable happy endings.

After moving South with her invalid mother in 1873, Woolson began writing about the Reconstruction South. In stories she collected in Rodman the Keeper: Southern Sketches (1880), she portrayed the resentment of white Southerners toward Northerners who flocked to the South in search of economic opportunity or healthier climates, often with little regard for the suffering the war had wrought. James praised in these stories “a remarkable minuteness of observation and tenderness of feeling on the part of one who evidently did not glance and pass, but lingered and analyzed.”

James’s quote nicely captures Woolson’s strengths as a writer, which won her both critical and popular acclaim. Her most popular work was her first, Anne (1882), the coming-of-age story of an unconventional woman who grows up on Mackinac Island, then is thrust into the world by her father’s death, much as Woolson was. It was so successful that Harper & Brothers gave her an exclusive contract to publish all of her writings thereafter.

Even before Anne was published, Woolson had traveled to Europe, where she would spend the rest of her life. She met James in Florence the spring of 1880, and became close to him while living in England three years later. She lived a peripatetic, independent life, finally settling down in a villa on the hill of Bellosguardo outside of Florence, where she lived from 1886 to 1889 and grew close to a family of artists, to whom James had introduced her. After the breaking up of her home there, Woolson spent three months in Cairo and then settled in England until returning to Italy, this time Venice, for the final year of her life.

Woolson has become known as a tragic heroine in a story not of her own making, rather than what she really was: a marvelous maker of stories herself.

Wooslon wrote four more novels while she was abroad, all set in the United States: For the Major (1883), East Angels (1886), Jupiter Lights (1889), and Horace Chase (1895). Her great theme was the hidden emotional lives of women, which she revealed slowly and often devastatingly. Raised to conceal their feelings behind a placid surface of propriety, women of the genteel classes, such as herself, suffered both physically and emotionally, as Woolson revealed. As she once told a friend, she always told the truth in her fiction, although she never could in real life.

When Woolson jumped or fell from her window in Venice in January 1894, she had been suffering from depression as well as various physical ailments that convinced her she would never be able to write another novel. Unwilling to depend on others, she was ready for death and may have decided to take her own life — no note or will was ever found to confirm the suspicions of James and others that she had. After her death, her reputation rapidly faded. Despite a series of obituaries that hailed her as America’s foremost female writer, she was left out of the literary canon formed at the turn of the twentieth century. She wasn’t alone: as the canon took shape, it was all male, eclipsing the contributions of women writers.

Woolson once wrote to James that the truest form of literature allowed us to experience the emotions of characters who felt and loved deeply. She accomplished as much in her fiction, the majority of which has been out of print for most of the 122 years since her death. 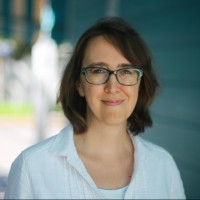 Anne Boyd Rioux is a professor at the University of New Orleans and the author of Constance Fenimore Woolson: Portrait of a Lady Novelist and a collection of Woolson’s fiction, Miss Grief and Other Stories, both available from W. W. Norton. She offers a monthly profile of a forgotten woman writer in her newsletter The Bluestocking Bulletin.