In Search of Sylvia: A Literary Pilgrimage to Heptonstall

This post is generously sponsored by Ryan, in honor of Ciarra’s birthday.

Ten years ago, I finally felt free. I had left my college, and with it, the life that was expected of me – that I would study hard and do well in school and secure a high paying job in corporate America in order to propagate forward my safe suburban upbringing. The immediate aftermath was difficult, but I quickly found joy in a new routine built around working odd jobs and independent reading.

At 21, I carefully saved my money and planned a tour of the British Isles, and the whole trip was one long literary pilgrimage. I rose early on Bloomsday in Dublin to attend at a reading at the Martello Tower, before spending the bulk of the day with a boy I thought I was in love with. I ate lunch at the coffeeshop in Edinburgh where J.K. Rowling wrote Harry Potter and the Sorcerer’s Stone as a struggling unknown, and ascended Arthur’s Seat by myself in the late dusky twilight of midsummer. All that was preamble to my last few days in Yorkshire — I saved the trip to see Sylvia Plath for last.

I arrived in York eager to acquaint myself with a beautiful city which I knew had played an important part of Sylvia Plath’s history as a young woman. York, the regional hub of Yorkshire, is an enthrallingly medieval town with the largest gothic cathedral in northern Europe. I picked my way over cobblestones, delighting in every stone alley with beautiful flower boxes and every half timbered pub with a hand lettered sign. I had afternoon tea with clotted cream and perfect scones and thought of Plath and her Yorkshire man, Ted Hughes, engaging in the same ritual as a happy young couple in love. I rambled the Shambles, a street in the middle of old city that maintains the ancient feel of medieval Europe. The narrow street has preserved buildings which jut out of their lots at unexpected angles from one another.

I loved York, and I couldn’t wait to visit the Moors, site of Sylvia Plath’s own literary pilgrimage to pay respects to the Bronte sisters. What I remember: buying a ticket to Hebden Bridge on the train, certain that the conductor would judge me as another American Plath girl if I asked for Heptonstall. The tough climb uphill to the churchyard. The sweeping view across the moors on that bright summer’s day. Searching for the gravestone in the churchyard in vain before asking a passing local for help. That the local knew exactly which headstone belonged to the cemetery’s most internationally renowned corpse.

But mostly I remember this: that for most of my holiday, I was insufferably serious about paying respects to canonical authors I daydreamed about joining. At the churchyard at Heptonstall, my self-consciousness at being a young American woman seeking to commune with Plath became so suffocating that I transcended it. And so I found myself at that churchyard reading the Duino Elegies.

Sylvia Plath and I are both white and relatively class-privileged, both from the northeastern suburbs, both daughters of scientist fathers, both with the need to balance society’s view of the female artist with our own creative impulses, but we came of age at very different times. I nearly failed out of college at the same age that Plath spent the summer working for Mademoiselle. She was published in her childhood; I remain unpublished thanks in part to my own fears. When, in a scene so close to The Bell Jar it feels scripted, I sat in a bathtub at Bryn Mawr and thought about ending my life, I wasn’t consciously thinking about Plath. I didn’t need to be. She was already there amid my other thoughts.

I did not then and have never attempted suicide. My mental health issues have resolved far better than I ever could have anticipated when I used to naively idealize Plath. Yet Plath and a few other twentieth-century women broke a trail for women’s confessional narratives — in a way, she set the precedent for young women turning their life experiences into art, and so I am one of many contemporary writers with an artistic debt to her.

Now that I am older, I notice different things about Plath – that she earned a Fulbright, got married, had two kids, and wrote several poetry volumes and a novel, all in such a short time span that her biography implies she died far older than her thirty years. Her achievements seem to me so significant that I want her to find a way to live through that famously cold and personally hellish winter. We will never know what Plath could have written had she survived her last suicide attempt, but I feel she would have matured into a writer who could see society’s constraints for women and level with them. What she did with what she had was far more revolutionary than the popular consciousness understands.

And so that summer, I paid my respects at her grave. I did not want to bring flowers to wilt and fade and echo her life cut from full bloom; instead I wanted to be present and reflective with her, and our shared love of poetry at once seemed an appropriate offering.

When I visited Heptonstall, I had been carrying the Duino Elegies everywhere for several months to read them in spare moments, finding new layers of meaning with each pass. That afternoon I decided to read the whole work out loud, and the experience was remarkably spiritual for me, though I was a professed atheist.

The elegies build an emotional narrative from the stages of human existence, pausing along the way to contemplate the theater and man’s relationship with the natural world. As I read out loud that afternoon, I realized that the Bloomsday afternoon with the boy would one day seem trivial compared to the gravity of my afternoon with Plath. I was conscious of a new understanding of the fragility of life, the striving for meaning in a world that often seems cruel.

The final elegy begins, “Someday at the end of the nightmare of knowing,” a sad description of the human consciousness of suffering. Rilke describes an afterlife in which the dead interact with sentient griefs, one of whom shows the speaker a river that enters the land of the living. These days I like to quip that my anxious tendencies and periodic depressive episodes are normal responses to the modern world. I suppose in a way this understanding of the world began that afternoon.

As I read with Plath that day, I began to imagine her as an ordinary young woman with an extraordinary creative streak. For the first time, I thought of her engaging in mundane tasks, or feeling caught between the fear of failure and the relentless criticism that followed her successes. I read that day without noticing the passage of time.

When I finished, I took a moment to contemplate the majesty of the moors. Late afternoon light highlighted the grass, and I contemplated the far-seeing view from the isolating rise. I went down to the train station, and out that night in the city of York, before boarding a plane back to the States to reunite with my mother in happier circumstances than I could have imagined a few months before.

The inscription on Sylvia Plath’s grave reads: “Even amid fierce flames, the golden lotus can be planted.” My creative life has had a slower burn, but I am grateful for the bright guiding light she cast while she was alive in the world. 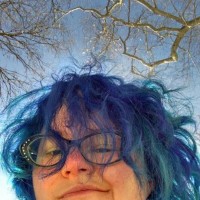 Emma Pfeiffer is a poet and essayist based in Brooklyn, NY. In addition to writing, she enjoys traveling, and her day job brings her to beautiful surroundings to help people understand and enjoy national parks. She wishes she had the geographic stability to adopt a few shelter cats.