I called him Henry. Henry was much like a houseguest who had overstayed his welcome. While he was no trouble to begin with — and in fact, I barely noticed him at all — after 12 to 18 months, our relationship was beginning to strain. He popped in and out whenever he wanted; he didn’t exactly cause any trouble but I always knew he was there, taking up valuable real estate and eventually, I was going to have to get rid of him.

Recently, the time came to do just that.

Turns out, it’s comparatively much easier to get rid of a long-term houseguest than it is to remove an inguinal hernia. Yes, I named my hernia Henry, and yes, it took 18 months before I bothered doing anything about it. I am apparently terrible at looking after myself.

The thing is, the hernia itself wasn’t really ever painful. An inguinal hernia is basically just a lump of fat or intestines that decides to break through a weak layer in the abdominal wall. It ends up looking like a weird, soft lump on your groin that can easily be pushed back in — or at least, mine could — and it didn’t exactly stop me from living an active life. I still went to gym classes two or three times a week, jogged, played sport, and skied or hiked on the weekend. There is an excellent chance that this active lifestyle is what caused Henry to show up in the first place.

But because inguinal hernias (there are many many other kinds of hernias) are generally considered more of a men’s health issue than women’s, it took awhile for me to figure out what was even wrong. In the last few months, Henry started to show himself more, and I felt a dull sense of discomfort every time he popped out. Because of the general region of my discomfort, googling symptoms (never a good idea) made it seem as though I had anything from ovarian cysts to cancer, until I finally spoke to some people IRL who suggested it might be a hernia.

By the time I finally saw a doctor and had an ultrasound to confirm the hernia, the doctor recommended I have surgery as soon as possible. Apparently Henry wasn’t just a benign (if annoying) friend. He was never going to go away on his own, and could actually “strangulate” my small intestines — that’s when the hernia can’t be pushed back in, and can result in a trip to the emergency room.

Long story short — I had the surgery. I figured it was better to do while I was young (-ish) and healthy. Also, my surgeon told me that it was better to repair before pregnancy, as the pressure could make the hernia even bigger. While I wasn’t planning on getting knocked up any time soon, all the signs pointed to the fact that this was something that I should probably deal with.

The surgery itself was pretty straightforward, although still fairly terrifying for someone who has never so much as had wisdom teeth removed. And I really wasn’t prepared for how much pain would be involved in recovery. The actions of sitting, walking, rolling over, or really, doing absolutely anything vaguely related to my core was painful even when I was pumped full of codeine. The general anaesthetic made me dizzy and lightheaded, but eating was also annoying because I had a sore throat and lacked appetite. As someone who has always been healthy, it was a shock to realize this fairly minor surgery had a lot of repercussions — including a warning to avoid strenuous exercise for six weeks.

More than the discomfort, though, I was amazed at how little information seemed to be available for cis women with inguinal hernias. While certainly the stereotype of old men and hospital patients is fairly accurate (men are nearly 25 times more likely than women to develop inguinal hernias), 3% of women will develop inguinal hernias in their lifetime. I can’t help but wonder if those statistics are still in date — with the rise of “fitspo” on Instagram and the popularity of high-intensity workouts or weights-based training programs like Crossfit, it’s not a stretch to assume that number of female patients will rise.

Essentially, anything that causes an increase in pressure in the abdomen can cause a hernia — like lifting heavy objects or persistent coughing. But because of cis men’s anatomy (i.e. balls), hernias are more common and the pain is generally more acute earlier on, leading to faster diagnosis. For cis women, the symptoms are similar to other women’s health problems, such as ovarian cysts, which means we’re more likely to put up with discomfort or pain for years, exacerbating symptoms by activities such as exercising, lifting children, or having sex.

Being aware of how you lift, and the risks associated with over-straining in workouts is essential to avoiding hernias. At the same time, not being embarrassed of symptoms, and checking out anything that might be unusual down there is important too.

Perhaps due to the lack of information out there, people tended to react with disbelief or embarrassment when I told them I needed time off for a hernia repair. “What exactly is that?” they’d ask, while eyeing my groin and clearly picturing some kind of hysterectomy. Men generally blushed and muttered something about a speedy recovery, before hastily exiting.

I can understand — the words “groin”, “lump”, and “surgery” don’t exactly conjure up a nice image when you’re chatting around the water cooler. But it’s this kind of lack of knowledge about hernias that can be dangerous. If hernias are relatively common (repairs are one of the most common types of general surgery operations, with 28 per 100,000 in the U.S), and apparently a hidden health risk for active men and women, why aren’t we talking about it?

Post surgery, I was fine. A little sore and a big baby when it came to painkillers, sure, but fine. But many women out there who may be lifting weights, carrying kids, or generally living an active lifestyle may experience pain or discomfort without realising what’s wrong — or be too embarrassed to take the next step to fix the problem. 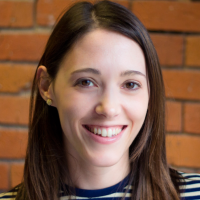 Margaret is an Aussie freelance writer and editor living in beautiful Vancouver, B.C. She has worked in a variety of journalism, marketing, and digital media roles in Canada and Australia.