ADHD, Not MPDG: Growing Up With Attention Deficit Hyperactivity Disorder

One popular conception of Attention Deficit Hyperactivity Disorder can be summed up as: “I don’t have ADHD — ooh look, a squirrel!” (T-shirt available at Hot Topic once upon a time). But of course it’s far more complex than that. Boys with ADHD will sometimes take on the role of class clown or troublemaker, and that attention can lead to a diagnosis. But ADHD can look quite different in girls and women, and many lack a diagnosis that might lead to beneficial support, treatment, and services. Like many girls with ADHD, I never acted out in attention-getting ways — I was a weird, dreamy, shy child who struggled to make friends from kindergarten on and often meandered through my own fantasy worlds. Teachers scolded me for not staying on task, but I never mouthed off to them or stood up on my desk.

In grade school, the alienness I felt from my difference compounded my need to shrink into the background as much as possible so people wouldn’t see how different I was. When I did speak, things often came out strange or nonsensical. People laughed at things I said in earnest. My thoughts split and rolled away when I tried to pin them down. I didn’t understand how everyone could stand school, with its regimen of sitting and controlled learning. My mind demanded entertainment and stimulus. How did the other kids sit still and study math? How did they maintain the concentration needed for a whole kickball game? It was all so painfully tedious that it made me angry, but I was too shy to throw tantrums or act out. Instead I chewed my nails and scribbled Harry Potter fanfiction when I couldn’t stand to pay attention in school.

Like me, my best friend from childhood had ADHD, but unlike me she was diagnosed and treated at a young age. She told me about it with her signature cheerful humor on the bus in sixth grade. Adderall, she said. It helped her concentrate and took away the bad feelings. To me, the potency of this pill was both appealing and frightening. It didn’t occur to me that I might be a candidate for it. It seemed to good to be true, and I didn’t think I deserved the help – I was just lazy, wasn’t I? That’s what other people said.

I attended high school during the heyday of the Manic Pixie Dream Girl, and people tended to slot me in as one: I was dreamy and distracted.

With puberty and high school came changes that left me feeling confused. And once I looked like a conventionally attractive teenaged girl instead of a skinny googly-eyed little girl, people began to treat me differently. I was still an excitable person — prone to spacing out, garbling words, speaking in non-sequiturs, and giggling uncontrollably — but my classmates laughed indulgently at these behaviors (“you’re so crazy!”). A certain type of older guy found me fun to tease; I was an adorable ditz, they said, an easy target. People told me my habit of ducking out of conversations and avoiding social events made me seem “mysterious.”

I attended high school during the heyday of the Manic Pixie Dream Girl, and people tended to slot me in as one: I was dreamy and distracted, with blunt bangs and a fashion sense that could most charitably be described as quirky. “You’re so happy all the time!” someone once said to me. “I wish I was like that.” New, positive attention was a head rush, but it still left me feeling somewhat lonely. I knew I wasn’t what people thought I was, and the shame of that fact kept me from opening up to anyone.

Then there were the internal mysteries, the things I still couldn’t understand about myself. Why, for example, did I experience periodic moments of clarity in school: the ability to see the self-contained beauty of a math equation, a wondrous appreciation of the cell-thin plant slides in science class, a pang of empathy for the struggles of Hester Prynne or Pecola Breedlove? These moments were tantalizing and rare, like a sudden clear frame on a TV cycling through fuzzed-out channels. How could I access these moments of understanding more frequently? By trying harder? I already felt as if I were trying all the time. I sensed a beauty in the world that I hungered for, a potential within myself just out of reach.

All this time, I didn’t have a reason, a word for why I was the way I was. But I did see myself reflected in certain fictional characters. In his novel Hogfather, Terry Pratchett thus described the mind of his character Mr. Teatime: “a truly brilliant mind, but it was brilliant like a fractured mirror, all marvellous facets and rainbows but, ultimately, also something that was broken.”

Sandman’s Delirium, who spoke in a meandering way, peppered with surreal non-sequiturs, especially resonated with me. She understood more than any of the other characters did, and when her brother Dream fell into a dark chasm of man-pain and couldn’t function, she pulled herself together for long enough to help him. “I don’t know how much longer I can be like this,” she said. “It hurts very muchly.” I felt this way almost every day, trying to impose order on the sprawling cacophony of my speeding mind. It hurt very muchly, indeed.

How could I access these moments of understanding more frequently? By trying harder? I already felt as if I were trying all the time.

As a college sophomore, after a breakdown following a late-minute paper disaster, I sat down with my counselor. This tall, calm, Dutch-accented woman provided stability through the year-long hurricane of homework and equally distressed friends. “It’s so hard to control myself and concentrate when I don’t want to,” I told her. “It’s almost like I could have ADHD or something…”

I didn’t detect any hint of scorn in her voice. That first granting of permission, from an authority figure I trusted, prompted me to begin to take the possibility more seriously.

Doctors can be leery of college students claiming to have ADHD, since the campus demand for illicit prescription stimulants is high. One doctor thought my inattention came from depression; another feared drugs would exacerbate a burgeoning eating disorder. My year-and-a-half-long odyssey through counselors’ and doctors’ offices involved sampling a wide variety of antidepressants and anti-anxiety meds that still failed to produce positive effects. I struggled through tedious paperwork and months of waiting, a particular trial for someone with ADHD.

Cut to me at 21 years old, twitching nervously on a psychiatric specialist’s couch. I’d given her a life recap, played an inane assessment game involving flickering squares, and filled out dozens of speech bubbles related to how I was doing in school and whether I thought I might be a reincarnated god. The reckoning was upon me. My IQ was at a certain level, the therapist explained. My concentration level was low. Extremely low.

I cried when I received my full psychological assessment and an official ADHD diagnosis. Even though it was a relief to have my suspicions confirmed, it also felt damning, in a way. My condition is chemical, and probably here to stay, I realized.

And so began the reconceptualization of my personal history. Finally I had to adjust the vision I’d always had of myself: I wasn’t lazy. I wasn’t making it up. I wasn’t just another college student trying to scam her way into an Adderall script. I had ADHD. I read about my new diagnosis, mentally checking each item off:

Hyperfocus. The short-lived and feverishly intense hobbies I had as a kid: pop-up books, seed beads, knitting, hula hooping. And, ah yes, the hours spent editing Sherlock fan videos instead of studying for my IB exams in high school.

Having trouble sitting still at mealtime and naptime. My dad once made up a little song he would sing to me during dinner: “We’ve got some rules ’round here and I think you’ve forgot ’em / One of those rules is keep the seat on your bottom.”

Poor handwriting, problems with speech development, neglecting details, doodling. The constant frustration of my teachers, the years I spent being unable to focus and stay on task at school.

Lack of commitment, loses interest in relationships. I decided to apologize to my ex for my flightiness; for growing bored instead of patiently tending to our relationship. It wasn’t personal, but I knew it still hurt them.

Depression. Anxiety. Sometimes I almost gave up, lost the will to keep struggling with everyday tasks, resigned myself to failure.

Inattentiveness, difficulty processing information. I always thought that if I just tried a little bit harder, or had more discipline, I could will myself into normalcy. I remember how hard I had tried, all my life. As hard as I could.

At last, I have begun to forgive myself.

A dose of stimulants did not make all my symptoms go away. My executive functioning is still pathetic; I still fidget and doodle sometimes; my room oscillates wildly between pigsty and Life-Changingly-Magically-Tidied-Up. I have to unlearn a lot of habits, and some things will always be a struggle for me.

But in so many ways, life is easier now that I have a diagnosis and treatment. I love the blessing of understanding and using my very capable brain; I worked on this essay for two interrupted hours, which I could never have done before. The bright moments of understanding I once craved are now a regular part of my life.

I wanted to write this for my younger self, and for all girls who keep silent and try to be obedient despite the ruckus in their skulls. Who do their best to keep the chaos from escaping their mouths, from demanding any attention. Who think their forgetfulness and scatterbrained nature mean they are stupid, lazy, ditzy, innately hopeless.

It’s not true. None of it is true. If you think you need it, find a practitioner who will take your concerns seriously and give you an assessment. Find forums for women with ADHD, seek out a community of people who understand. Be an advocate for yourself and your odd but beautiful brain.

ADHD isn’t a superpower in disguise. It’s still hard for me, and for many, to live with. But despite this, many of us are stronger than anyone knows. We might struggle with daily life on an epic scale, and tasks that are “normal” for some might be grueling feats of endurance for us, but I for one have found great strength and motivation – and even pride – when I give myself a break and just keep going anyway. It now seems like the only choice. I think I have felt more than enough shame. 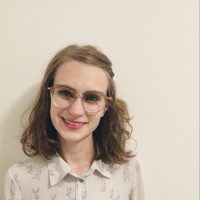 Grace Lidinsky-Smith is a well-meaning writer in the American Midwest.